ASUS PB328Q Review – The ASUS PB328Q is a professional-grade monitor that combines multiple picture quality enhancements, ergonomic adjust ability, and advanced technologies that anyone who uses a PC on a daily basis will appreciate.

As the bridge between your PC and your eyes, the monitor is one of the most important components you’ll purchase, but many enthusiasts end up with a subpar unit by focusing on a handful of specs, such as price, refresh rate, and native resolution. Perhaps most importantly, the ASUS PB328Q Review blends into the background and lets the games, images, websites, documents, applications, videos, and everything else you view on your PC shine through. 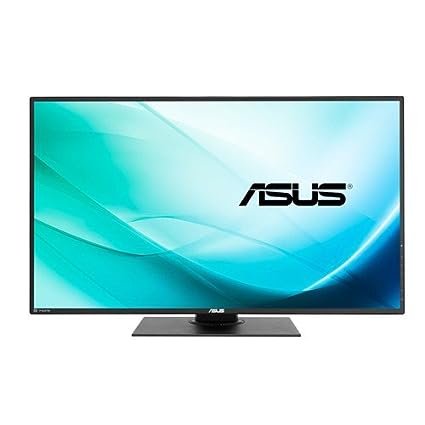 When people walk by you as you’re using the ASUS PB328Q Review, they’re likely to stop and ask you what monitor you’re using and what its specs are. Tell them that this panel measures 32 inches, and the native resolution is 2,560 x 1,440 (WHQD). Compared to a 1,920 x 1,080 display, this one offers 77% more desktop space. For professionals, this means more space for tools, toolbars, and application windows, and for gamers and media enthusiasts, you can see more of the action at once. For perspective, this monitor will let you watch four 720p videos simultaneously. The PB328Q boasts a pixel density of 92ppi (pixels per inch) on this screen and features a narrow 0.277mm pixel pitch (the distance between two pixels).

With so much screen space, you can easily run two or more programs in open windows side by side, which helps keep your multitasking sessions more active and productive. Most of us sit directly in front of the monitor, but when sharing your screen or looking at it off center, the ASUS PB328Q Review’s wide viewing angle, which is 178 degrees left and right (horizontal) and 178 degrees up and down (vertical), really comes in handy. This means that with this monitor there isn’t as much color shifting or negative image effect you experience with monitors that feature narrower viewing angles.

Contrast ratio is another specification that has a big impact on image quality, and the PB328Q supports an impressive 100,000,000:1 ASUS Smart Contrast Ratio. This technology changes the brightness according to the on-screen video or images, in an effort to improve the appearance of dark subject matter and make the colors look more vivid. ASUS Smart Contrast Ratio is designed for video and movie playback, but with it disabled, the monitor has a conventional contrast ratio of 3,000:1.

On the subject of colors, the ASUS PB328Q Review uses a VA (vertical alignment) panel, which excels at color reproduction; it supports 100% of the sRGB color space and can display up to 1.073 billion colors. The monitor also supports a 12-bit internal LUT (lookup table), which lets it reproduce images with more gradual transitions between hues, for more true-to-life results. The LEDbacklit PB328Q features a brightness rating of 300cd/m2 for vivid images regardless of the application. A 4ms gray-to-gray response time delivers smooth video playback and virtually ghostingfree gaming and 3D model manipulation.

Connectivity is another area where the PB328Q excels. There’s one input for each of the following: dual-link DVI, HDMI, VGA, and DisplayPort. You can also run the included audio cable to the back of your PC for the display standards that don’t support audio (DVI and VGA), and there’s a headphone jack on the I/O panel in case you’re in an office environment and can’t get away with using the built-in 3W speakers (which for some users could eliminate the need for a set of standalone speakers). The left side of the monitor also features a quartet of USB 3.0 ports, and the monitor ships with a USB 3.0 upstream cable. The quick-release stand also conceals a 100mm x 100mm VESA mount, which simplifies connections to third-party screen mounts and stands.

Although the raw specs of the PB328Q are impressive, they only tell a part of the story of what makes this a great monitor. If you’re using a monitor that’s a few years old, then chances are good that it lacks a few ergonomic and fatigue-fighting features that modern displays like the PB328Q offer. ASUS’ Eye Care Technology features, for instance, are specially tuned to ease eye strain.

Although LED-backlit monitors are extremely popular, one drawback they tend to suffer from is a barely perceptible flickering of the backlight caused by the PWM controller that maintains the light’s consistent brightness. With the PB328Q’s Flicker Free feature, however, this flickering is effectively eliminated, letting you comfortably use the monitor for extended periods.

It’s a well-known phenomenon that blue light can be harsh on eyes, leading to strain and even age-related macular degeneration. By selecting one of the four filtering levels on the OSD, you can reduce the amount of blue light emitted by the display’s LEDs by as much as 70%.

The matte finish on this display might be one of the first things you notice, but its benefits include the ability to reduce glare in brightly lit environments and eliminate distracting reflections, which can lead to eye strain, headaches, and blurred vision. As a 32-inch display, this monitor is sure to fill your desk, but thanks to its 1.07cm bezel, you’re not getting a lot of black plastic framing this device.

The aforementioned quick-release stand also supports a variety of screen adjustments to ensure the viewer’s comfort. There is up to 150mm of height adjustment, 60 degrees of swivel movement to the left or right from the base, and a 25-degree tilt range (-5 down, 20 up). Using these functions, you can adjust the monitor according to your exact needs, independent of other environmental factors. You can also pivot the screen 90 degrees to view it in a portrait orientation, and the OSD (on-screen display) rotates to accommodate your new view. We also like pivoting the screen like this to more easily connect the power, display, audio, and USB cables.

Of particular interest to professionals in visual arts fields is the monitor’s color reproduction. But in addition to a wide color palette, the PB328Q also gives users an impressive amount of manual control over the resulting image.

The 6-axis color-independent control function lets users to tweak colors to suit their needs. For example, on a typical monitor where you don’t have access to independent color adjustments, tweaking the green color balance will oftentimes change the appearance of white in backgrounds. With the PB328Q, however, you can change the saturation and hue parameters of red, green, cyan, magenta, and yellow without muddying other colors.

Another color-enhancing technology ASUS adds to this monitor is its exclusive Splendid Plus Video Intelligence, which lets you cycle through five preset video modes optimized for certain types of content. The settings include Reading, Darkroom, sRGB, Standard, and Scenery. There are also two user-configurable modes that you can customize, save, and switch to on the fly.

Adjusting the monitor’s settings is painless, thanks to the 5-way OSD joystick, located just behind the right edge of the panel. It lets you intuitively navigate menus and select the options you want by pressing in on the joystick like a button. Below the joystick is a column of five hotkeys, which, from top to bottom, are set as close/exit, input select, QuickFit, shortcut 1, shortcut 2, and power. The two shortcut hotkeys can be customized to perform one of nine common functions of your choice; by default they will adjust brightness and Blue Light Filter, respectively.

If you are using multiple simultaneous inputs, the PB328Q lets you see up to two sources at once, using a PIP (picture-in-picture) or PBP (picture-by-picture) image. You can also quickly and easily switch between the main and alternate sources, including swapping the audio sources.

One of the best things about having such a generous number of pixels winking at you at once is the ability to visualize things closer to their actual size. For those who are interested in seeing what their images will look like before they’re printed out, ASUS offers its QuickFit Virtual Scale Function, which lets users preview several common photo (8 x 10, 5 x 7, 4 x 6, 3 x 5, 2 x 2) and document sizes (A3, A4, B4, B5, letter) on screen. Users can also use the function to align on a grid and view centimeters and inches. You can also choose from seven different colors for QuickFit backgrounds.

The ASUS PB328Q Review is a monitor that has a lot to offer your eyes. In addition to its impressive Energy Star rating and an 89.9-watt active power draw, this unit consumes just half a watt while in power-saving mode. ASUS backs it with a three-year ASUS Rapid Replacement warranty. For those in the market for an affordable professional-grade monitor capable of doing double duty for gaming and movie watching, the PB328Q is the perfect pick.