Arcam has thrown its hat firmly back into the two- channel ring with the arrival of its new HDA Series. Adam Smith takes the plunge with the SA20. Read our ARCAM SA20 Review. 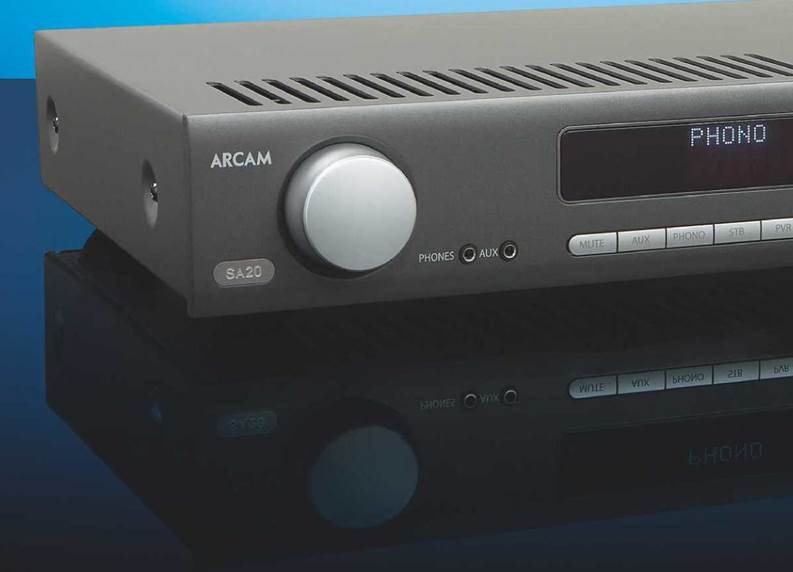 ARCAM SA20 Review – Arcam has been a British success story ever since it first burst onto the hi-fi scene in the late seventies. From my point of view it has always been a reliable go-to, with products that never fail to perform admirably.

The SA20 is one of three units that mark the arrival of the new HDA range. This is the first selection of two-channel components announced since the acquisition of the company in 2017 by Harman International. As always when such an event occurs, a certain amount of uncertainty over the future of the name ensues, but the new lineup underlines the firm commitment that both Arcam and its new owners have to the resurgence in two-channel audio. Even more interesting is that the second model in the HDA lineup is a lower-cost amplifier; the Class A/B SA10, while the third is the CDS50 CD player. Yes, that’s right – a CD player. OK, it has the requisite network player and streaming facilities, but the fact remains it’s also a high-quality CD and SACD player. You know – one of those things we were all assured would be dying out any day now!

It has remarkable depth and deftly paints expansive sonic pictures

The SA20, however, is somewhat more unusual, despite being essentially an 80W-per-channel integrated amplifier. The headline is its use of a Class G topology in its output stage, which is a rather clever method that builds on basic Class A technology. The result is more power when required, but without the concomitant downside of unwanted heat when things are playing more quietly. More details can be found in the In Sight boxout overleaf but, briefly, the amplifier has two power rails for its output stage – one for normal, low-level listening and a second that is brought into play when more volume is demanded. Essentially, you can think of it as being a bit like a turbocharger on a car engine, albeit without the bangs and flames from the rear when the demand drops off once more…

The HDA series also marks the arrival of a slight re-style for the company’s products. The Arcam DNA is still there, but the units are sleeker, more stylish and definitely more feature packed than before. A comprehensive control menu structure is accessible through both the remote

control handset and the front panel, giving more options than might be first expected. In the case of the SA20, this provides access to five digital filter options, display dimming settings, an A/V pass-through setting for any of the inputs, a standby timeout and the option to choose whether the insertion of a headphone plug automatically mutes the speakers or not.

Overall, the SA20 is neatly laid out and easy to operate. Three digital inputs are available – one optical and two coaxial – plus three line inputs and an MM phono stage. Other socketry at the rear includes RS232 and Ethernet connections to link the unit to a home automation network, for which a more than comprehensive programming guide document is available on the Arcam website. In addition, the supplied remote control handset can be programmed to operate other equipment from additional manufacturers and, again, instructions and a range of pre­programmed codes for common partnering items is available.

A USB socket can also be found on the rear panel, but this is for software upgrades only and is not a dedicated input as such. Those wishing to connect a personal audio player will need to do so via the front panel AUX input, which is a standard 3.5mm stereo jack socket. Beside this, an additional 3.5mm socket provides connection for headphones.

For auditioning, I set the SA20 up with my regular PMC twenty.24 loudspeakers and driven by a Naim CD5 XS/Flatcap XS CD player into the CD input, plus a Michell Gyro SE turntable with SME 309 arm and Ortofon 2M Black cartridge (HFC 434) into the MM phono input.

I generally find Arcam products to have something of a house sound and I am pleased to note that the SA20 has continued this tradition, as it is very much a good thing. There is nothing about its performance that will ‘frighten the horses’ and yet it never sounds especially drab or soporific. The SA20 strikes a very well-judged balance between pulling you into the music with its fine level of detail, but never throwing absolutely everything at you in a bit of a jumble. It is generally composed, yet ebullient.

The first thing that strikes me about it, and which is something that takes me back to a more recent Arcam favourite in the form of the FMJ A28 (HFC 311), is the delightful midrange performance. The SA20 has a remarkable sense of image depth and is able to deftly paint surprisingly expansive sonic pictures between the loudspeakers.

As a result, the Arcam really helps to bring music alive before your ears in a way that belies its price tag. Vocalists, in particular, stand firmly centre stage, locked into pin-sharp focus and with just the right amount of fine detail that makes intakes of breath easy to pick out, but not distracting. Donnie Munro’s magnificent version of Runrig’s Always The Winner, recorded live at the Royal Albert Hall and accompanied by just a piano, is a true

Class G topology means more power when required, but without the heat hairs-on-the-back-of-the-neck moment through the SA20. Furthermore, the sense of scale of the location is surprisingly easy to discern.

The delightful midrange is aided in its endeavours by a sweet and open treble performance. Top-end detail is most impressive and the SA20 does a fine job of pulling the subtleties that are buried in the back of recordings neatly to the fore. The caveat here is that this sense of poise and clarity is only guaranteed at normal volume and slightly above, but once you start

The price point is competitive, and the SA20 is up against the likes of the Cyrus ONE HD and Rotel A14 (HFC 421), both worthy performers. Increasing the budget slightly brings the Exposure 2010S2D (HFC 401) into view, and this is a fine design that takes a lot of beating. Even the mighty Yamaha A-S1100 is not out of reach. The really big problem the SA20 faces, however, is the Naim Nait 5si. Comparatively bereft of features it may be, sonically it is the one to beat.

Styling is neat, and the main display is both large and clear 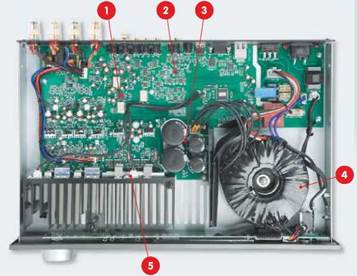 Class G technology has been around for a number of years now, but first came to prominence back in the seventies in the shape of Hitachi’s Dynaharmony range of amplifiers. In a normal Class A amplifier, the output transistor(s) are switched fully on all the time so that the power supply runs at full capacity even when no signal is passing. This is good in terms of sound quality and the absence of crossover distortion, but means that Class A amplifiers tend to be very inefficient. A balance, therefore, normally has to be struck between boasting reasonable power output and turning the component into a room heater. As a result, Class A amplifiers tend to have comparatively low power outputs.

Class G, however, takes this a step further by having two power supply rails. Most of the time, the output circuit runs on the lower supply, which gives all the advantages of Class A but lower power dissipation due to the smaller supply voltage. However, when things get loud, the circuit switches to a second, higher voltage power rail to give the necessary output swing, which means that the amplifier can play loudly when needed. Once the demand has gone away, it switches back to the smaller rail.

to push things further, there is a tendency to harden up. At a standard listening level the explosive cymbal strike in the middle of Jeff Buckley’s So Real is impressively dynamic, but turn the wick up further and it turns into a rather splashy crash.

At the low end, the SA20 sets off to a fine start by serving up a main course of deep, firm bass with a pleasing side order of additional detail. Simpler synthesiser bass lines bound along enthusiastically while double basses have a delightful roundness to their notes. In addition, Ian Maidman’s fretless bass line on David Sylvian’s Taking The Veil comes across in all its sinuous, fluid glory and propels the track along perfectly.

The only time this impressive performance starts to show a few cracks is, again, when the SA20 is pushed harder. When elevated to neighbour-annoying volume levels, the thumping bass line from Underworld’s Jumbo sees the Arcam starting to sound a little uncertain for the first time. The bass notes are certainly solid and weighty, but the SA20 seems to be struggling ever so slightly to keep up with their pace, making the underlying tempo of the track a little less tight than usual. Bringing the volume back down a touch restores order, but it seems a shame not to be able to pound something like this out noisily.

The SA20 marks a fine return to the forefront of well-priced two-channel reproduction for Arcam. It is well constructed, neat and blessed with a good range of inputs and functions. As long as it is not pushed too hard, it has a sound that is typically Arcam in the very best sense and makes a convincing case for itself at the price •

AS: What advantages do you feel that the Class G power amplifier topology offers?

NC: Class G offers two clear advantages. The first is excellent speaker driving capability, due to the superb power reserves and current delivery of the configuration. As a result, the amplifier is more than able to partner virtually any speaker well, including those that might be traditionally regarded as “complex and difficult” to drive.

The second advantage is the greater efficiency of the output stage, which results in a smaller heatsink required for a given power rating of amplifier. In addition, it has the added bonus of making the amplifier run cooler, which can give enhanced long-term component life.

Of course, this comes at the cost of greater complexity and skill required in implementation, but this is where the design team here has excelled in honing this technology to a class-leading state of performance.

How have you ensured that the circuit can respond quickly enough to sudden demands, such as a sudden crescendo in a largely quiet piece of classical music?

The additional higher power rail always tracks slightly above the music signal, with enough headroom to respond much faster than is required by it. This function ensures that it is always ‘ahead’ of the incoming signal and not caught out by any musical peaks.

Do you envisage the HDA range growing further – are there other matching products in the pipeline?

Yes, most definitely. We maintained the FMJ look for around 19 years, so in the future there will certainly be more products in this range that make use of the revamped styling. These will focus on new technologies and utilise our core skills in both two-channel and AV to the best of their ability.