Acer Aspire S24-880 Review: A laptop for your desktop

When you look at an all-in-one PC like Apple’s iMac or Lenovo’s Ideacentre ATO,  it’s hard to imagine how they’ve managed to cram all the parts of a PC into the same space as a monitor alone. Thanks to intrepid dismantlers like our friends at iFixit, you can see exactly how it’s done, showing some impressive ingenuity. Acer, though, has approached its all-in-one design in a slightly different way. This is a company after all, that already makes monitors and laptops. Why reinvent the wheel? 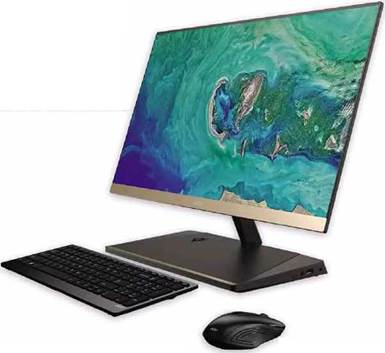 So. yes, the part of the Aspire S24 that looks like a monitor really is a monitor. The part sitting on the desk underneath it that looks like a laptop with the screen ripped off is in fact a laptop with the screen ripped off. Add a plastic stand between the two, and – voila! – an all-in… er. one and a half PC. With a handy shelf that might keep a bacon sandwich warm.

It’s all right for general Windows tasks, but is slow to start up

To be fair, they’ve styled the whole thing quite nicely, and with no extra gubbins to shoehorn in, the screen section is astonishingly skinny, suffering none of the rear bulge that rivals have to dress up with curves or protrusions. When you stop typing for a while, whether to watch a film, plug in a music keyboard or play a game with a controller, the keyboard tucks away neatly on that shelf. You don’t get solid aluminium casing, but the black and-gold plastic finish looks posh enough, even if the keyboard and mouse feel a little flimsy.

The 24in IPS LCD panel has a matt finish to cut unwanted reflections, and its Full HD resolution is adequate. Brightness is fine for a PC screen (they don’t need to be as bright as phones), but we found contrast poor, largely because the black pixels weren’t very dark. Nearly 89 per cent of the sRGB colour range was covered, which is quite acceptable for an everyday screen. Colour accuracy however, wasn’t great and the backlight fell off in the corners. This wouldn’t be our first choice for photo editing, although it’s not terrible for casual work.

Inside the base is an i5 8250U processor, which comes from Intel’s latest eighth-generation range – but, before you get too excited, it’s the range for laptops, not desktops. It does have four cores, and the low 1.6GHz clock speed zooms up to 3.4GHz when required. By laptop standards, this is a decent performer. It’s OK for general Windows 10 purposes and its low power design enables the S24 to run almost silently 3D games can be persuaded to run on the integrated graphics chip by turning down resolution and quality but forget virtual reality or 4K video editing. For less money you could get a PC with a faster desktop i5, or a somewhat faster i3 plus a proper graphics card. With just a 1TB hard drive and no SSD, there’s a sluggishness to starting up, loading programs and switching between tasks.

There are plenty of ports on the back to add external accessories, including USB Type-C, and both Gigabit Ethernet and fast Wi-Fi are built-in. We were pleased to find HDMI ports both for input so you can use this as a screen for another computer, Blu-ray player or whatever – and output, so you could add another monitor. Overall, this is a very usable machine. It’s not a great deal for the spec.

If you don’t need high performance, this is a simple, compact PC that’s all right for basic everyday use

If you don’t need high performance, this is a simple, compact PC that’s all right for basic everyday use

The older AMD processor is so-so but better for graphics, and there’s an SSD alongside the hard drive