Zowie XL2540 – A huge component of marketing PC hardware is the numbers game. ONLY FOR THE SERIOUS SPORTS GAMER

The bigger the number, the better the product. Benq’s new Zowie XL2540 blows other monitors out of the ballpark with one figure in particular – the astonishing refresh rate. This speed-demon cranks out the frames at an incredible 240Hz, which the fastest we’ve yet seen. The question is whether or not such a high-speed is really necessary, even in the hyper competitive world of e-Sports? 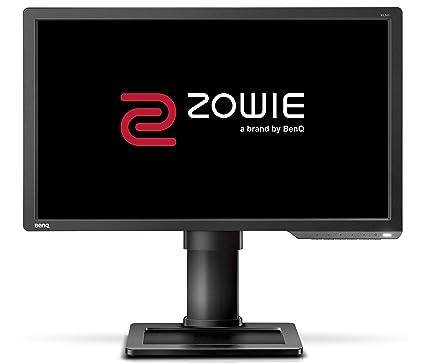 Measuring 24.5-inches across the diagonal, Zowie XL2540’s not an exceptionally large monitor, though the 1080p resolution means it’s not too hard to spot the pixel structure. A matte finish matches the relatively plain yet attractive stand and bezel design. Unlike many of today’s monitors, Zowie XL2540 doesn’t utilize an edge-to-edge screen, with a rather thick 12mm bezel around the edges. A pair of plastic flaps are included that can be attached to each side, so your competitor can’t glance over at your screen mid-match. It’s also a handy way of obscuring any annoying light sources that might be at the venue, or take your mind off the hundreds of people in the crowd ahead. The stand itself is fully height and angle adjustable, making it easy to position in the exact ideal position.

As with Benq’s prior high-speed monitors, it uses Blur Reduction technology, but is now referred to as Dynamic Accuracy technology. We used the benchmarks at www.blurbusters. com to see how well this worked. Zowie XL2540 turns out that this technology is highly reliant upon being served 240 frames per second by your GPU. Any lower and blurring becomes extremely apparent. Unfortunately it seems that Benq has removed the ability to lower the strobing of the backlight, unlike past models, which means this blur is here to stay if you can’t hit 240 fps.

The panel in use is a TN panel, picked solely for its ability to hit a 1ms gray to gray response time. While other monitor technologies are getting close to this, they’re still not up to the necessary speed required to hit 240Hz. Unfortunately the use of a TN panel also brings several drawbacks with it. Nearly every display we’ve tested in the last 12 months has been based on IPS technology, and the difference in colour quality and contrast is night and day.

We used the LCD tests at www.lagom.nl to check these out and noticed several immediate issues. Firstly, the contrast test shows that brighter blues and greens tend to meld together, lacking the clear differentiation found on IPS panels. Colors in general are also not as vivid or punchy as competing IPS displays. While “Benq’s new Zowie XL2540 blows other monitors out of the ballpark with one figure in particular – the astonishing refresh rate” the white level test showed this display can handle subtle changes in brightness, it didn’t fare as well in the black level tests, with darker blocks of color all merging into one. Turning the display’s Black eQualizer feature on relieves this symptom, but at the cost of making the rest of the image appear slightly washed out.

As with Benq’s last gaming monitor, a small hub is included that sits on your desk, called the S-Switch. This makes it easy to change various pre-programmed profiles on the fly with the click of a button. We only wish the On-screen Display was a little more intuitive to use, based on old-school tactile buttons which change in purpose depending on which part of the menu you’re using.

At $699, this is one of the most expensive 24-inch displays on the market, but Zowie XL2540’s targeted at an extremely specific audience – those who need the ultimate in twitch gameplay. Whether or not the difference between 144Hz and 240Hz will make a real world difference is debatable – but for those who are playing for tens of thousands of dollars it’s worth trying out the difference. However, you’re going to need to maintain a consistent 240 frames per second, and the drop in color quality means it’s not suitable for general gaming.