BENQ GW2270H Review – WHILE THERE ARE plenty of high-cost, flashy monitors out there, sometimes you just want something smaller, cheaper and neater. This is where the BenQ GW2270H comes in.

This 22in, Full HD monitor is designed as a low-cost workhorse.

Unsurprisingly, at this price, the GW2270H is rather plain. It has a simple black plastic case and stand. It may be a little boring compared to some displays, but that rather adds to the GW2270H’s charm, as this unobtrusive monitor will sit calmly on a desk without drawing attention.

It may look a little boring, but that rather adds to the GW2270H’s charm, as this unobtrusive monitor will sit calmly on a desk without drawing attention

The one downside is that the stand doesn’t provide any height adjustment, so you’ll either have to place it on a stand or invest in a Vesa mount, using the 100x100mm mounting holes at the rear. You do get a little bit of tilt in the stand, so you can easily line up the GW2270H and look directly at it. The stand is easy to assemble, as you just push it into the clip at the back of the screen and tighten the thumbscrew to hold it in place. 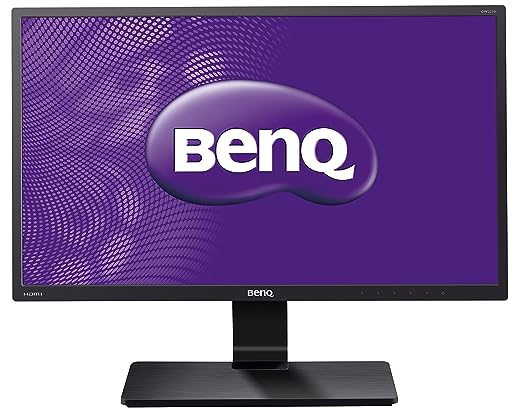 More expensive monitors tend to have rigid screens to protect them from damage, but the GW2270H has a softer front to it. However, we don’t think that’s anything to worry about if you intend to use this screen in a place where it’s unlikely to be accidentally knocked.

Two HDMI ports and a VGA port provide all the inputs you’re likely to need, and make it easy to connect multiple devices. Only a VGA cable is provided in the box, which feels a little antiquated.

Should your computer only have DVI, then a DVI-to-HDMI adaptor costs just a few pounds.

There are no speakers built into this monitor. That’s no bad thing, as integrated speakers, particularly at this price, tend to be pretty bad. With no headphone output on the monitor, you’ll have to plug headphones or speakers into your PC directly.

Make sure you adjust the sound output, so that your computer doesn’t send audio via its HDMI output, though.

It’s image quality that’s the really important part, and the BenQ GW2270H provides a great picture for the price.

The edges of the screen are a little lighter than the middle, and there’s a bit of light bleed at the bottom, but it’s far from terrible.

We measured the screen as producing 88% of the sRGB color gamut, although that increased to 92.1% after calibration. Better monitors exist but, for the price, this accuracy is admirable. Contrast, at 3,190:1, and black levels, at 0.092cd/m2, are also excellent for the price. Indeed, blacks are nice and dark, and we could see all the details in our test images. We measured a delta-E of 1.4 after calibration, which shows that the colors displayed are done so accurately. Color temperature was measured at 7,728K, which is a little colder than the reference level of 6,700K, although not so different as to show a harsh color cast.

Our one minor complaint is that the matt screen does take a little bit of vibrancy out of the image, and we found that the image could look a little washed out, particularly on the Windows desktop. A reflective display would have helped colour vibrancy at the expense of viewability.

The basic onscreen menu only gives you simple controls over the display (brightness, contrast and so on), without some of the more advanced controls that you get on professional monitors. The controls are a little annoying, too. The button to the left is used to go right in menus, for example. Given the few times that most users will have to dive into the menus, however, this really isn’t a major problem.

There’s nothing exciting about the BenQ GW2270H and no features that particularly leap out. Far from being a downside, that’s actually the strength of this display. For anyone that wants a basic Full HD monitor for simple office work, the low price and generally good image quality of this display make it a decent option. Spend a little more and you get something better, but if you’re on a tight budget, this is a great choice.

It features a flicker-free LED 22“ AMVA panel placed within a reasonably thin matte black bezel. Though we’d assert that there’s nothing inherently wrong with a glossy bezel, there are plenty of users who would happily argue that point and say they prefer the option BenQ’s taken – no doubt pointing out the fingerprint marks and dust collecting nature of the alternative.

The screen has a dynamic contrast ratio of 20,000,000:1, native contrast of 3000:1, a 5ms response time, and maximum resolution of 1920 x 1080. The avid gamers among you may well balk at the higher response time there, but for the vast majority of users it’s more than enough for everyday tasks. The connectivity is ample for most users too, with a single VGA and a pair of HDMI, plus a headphone port.

While the GW2270H lacks the lure of an IPS screen or DisplayPort connectivity, and its feature set can be considered basic, it does lower the price considerably – to less than a hundred pounds if you shop around for it.

Despite the lack of physical features, the monitor does inherit the usual BenQ line of image improvement features, such as low blue light, Senseye 3, and an improved native contrast ratio. Sadly, though, there’s limited ergonomic movement, except for a standard tilt from -5° to 20°.

The design is pretty standard throughout, however. There’s nothing to make this model stand out from the crowd of other excellent BenQ monitors, but then that’s not what BenQ are aiming for with the GW2270H. Basically, if you’re after a screen that works well, here’s the monitor for you.

The quality of the displayed image is really very good considering it’s not an IPS panel. It’s perfectly clear with a deep range of quite realistic colors, and it produces a sharp and crisp effect on everything it displays. There’s a slight graininess when the monitor is displaying a solid light-color though, this is probably down to the matt-like panel itself, but it’s not something that’s going to distract you. If anything, it’s a little easier on the eyes when bright whites and pale colors are displayed. The overall effect, though, is one of quality regardless of the low price.

The BenQ GW2270H is certainly good value for money. It’ll last and look good for years to come and, while the demanding viewer may well steer clear of this entry level model, the average user will find it working perfectly well with anything they can throw at it. When you consider a dual-monitor setup would cost, so certainly worth looking into, at least.

Taiwanese electronics companies low their slogans. BenQ (pronounced ‘ben-kew’) stands for Bringing Enjoyment ‘N’ Quality To Life (which by our reckoning ought to make Beaqtl), but that’s probably why we don’t work in marketing. The GW2270H has a slogan of its own: ‘Simple and Exquisite for Minimalist Living’. We think this might be over-egging it. to be honest. A more accurate tagline would be ‘It’s Plain Because it’s Cheap.’ 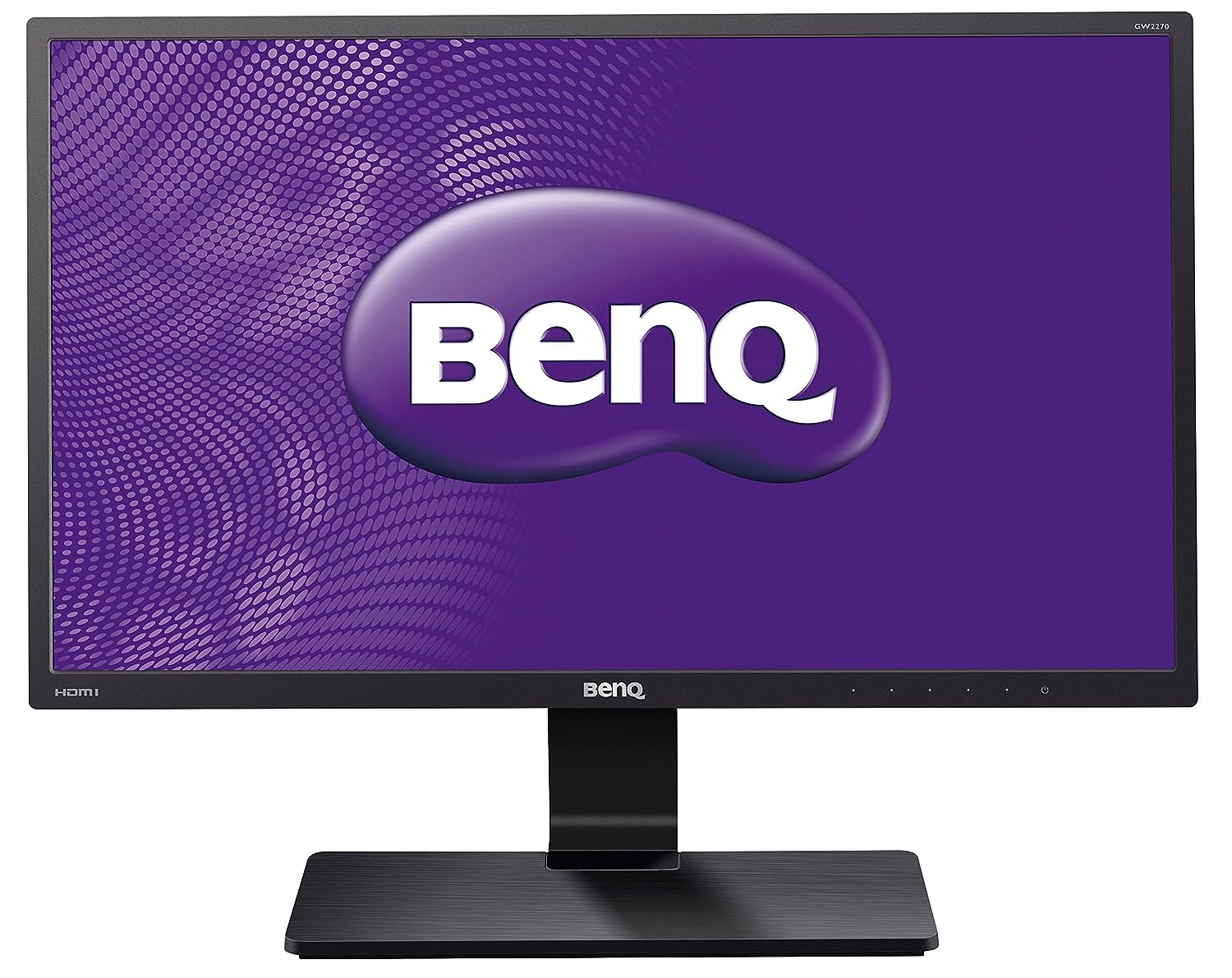 And there’s nothing wrong with that. “The black plastic case actually looks classy, with its clean lines and small ridges on the back panel, ‘[here’s no height adjustment in the stand, but it tilts a few degrees, and there are VESA screw points if you prefer to use a different mount.

Hits price is the big selling point, but it also offers a decent picture for everyday use.

Both of the inputs are HDMI, which will connect directly to most but not all PCs. If you haw a DVI or Display Port output, it may work with a cheap HDMI adapter, but you’ll need to check with the motherboard or graphics card maker. If the adapter doesn’t handle audio, that’s fine, because the GW2270H has no built-in speakers anyway; nor does it provide a USB hub.

What it does give you is a decent Pull HD picture. Our tests found black pixels were very dark, contributing to a wry good level of contrast, and we measured 88 per cent of the sRGB color range, rising to 92 per cent when we used a hardware calibrator to adjust the settings. Even if you can’t do that, accuracy is quite adequate for everyday purposes, although not ideal for photo or video editing.

You’re unlikely’ to get much better. The color temperature was slightly bluer than the quoted 6.700K, but the difference wasn’t really noticeable. There’s also a Low Blue Light mode to help avoid possible effects on sleep and long-term eye health.

The screen has a matt finish which avoids reflections, though this does make it look a little dull compared with glossy models. Unlike the hard glass fronts of more expensive monitors, it doesn’t feel very’ protective, although that shouldn’t matter with a desktop PC monitor unless you’re especially clumsy or have young children.

If your budget stretches a little further, the Asus VC239H is a more refined and slightly larger 23in Full HD monitor, with built in stereo speakers. It lets you choose standard picture settings or an sRGB mode that sacrifices some contrast for higher accuracy.

Nothing to get excited about but if you want a basic monitor to complete a PC setup, this fits the bill