I’m increasingly feeling like Goldilocks at a porridge testing event regarding ViewSonic’s 4K displays. First I covered the very expensive VP2780-4k, and found it didn’t support 60Hz at full resolution. Next up was the VX2475SMHL-4K which, at 24″, was too small for the higher resolution to be really appreciated.Now the VG2860MHL-4K has arrived, being both a decent size (28″), a competitive price, and offering 4K resolution at 60Hz. So, could this be the one that’s just right? Well, on paper the design does appear to address many of the issues that bugged those earlier 4K monitors. 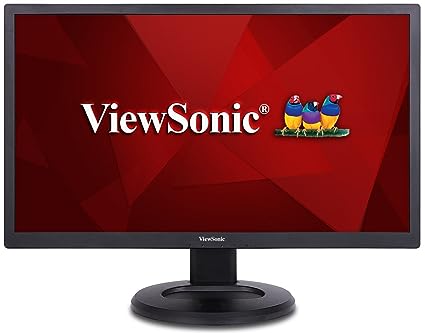 It’s 300cd/m2 backlight is sufficiently bright, while the contrast ratio is decent and it claims a response time of just 2ms. That last figure reveals that this isn’t an IPS technology screen, and it achieves that response by using a TN film based model that can sadly only manage 170°/160° of viewing angle. If you’re not moving around all the time, though, that’s acceptable, but it’s something you need to consider if you do.

Where this screen really pulls out the stops is in its color gamut representation, with 96% of the sRGB range available to be viewed. Technically ViewSonic do make a few screens with even greater sRGB coverage, but the 10-bit colour processing in this is not rubbish by any gauge.

This design is also very strong on connectivity, having DisplayPort 1.2a, Mini DisplayPort 1.2a, MHL 2.0, HDMI 1.4a, and a DVI connector. I’m still bemused by monitor makers’ obsession with MHL, given the handful of times I’ve ever connected my phone to a screen, but someone must do it. There is also a really useful USB 3.0 hub with four ports downstream, divided into two each of USB 2.0 and USB 3.0.

ViewSonic also include some predictably limited 3W dual speakers, for those who haven’t got room for anything better. However, when you factor in the really nice tilt and swivel stand, the package hints that the target audience here is stock traders and accountants, desperate to see more rows and columns than ever before rather than those looking to max out their home entertainment or gaming system.

Backing up that hypothesis, ViewSonic also gave this screen some neat multi-picture support, allowing up to four computers to be represented simultaneously, and including both PIP (picture-in-picture) and PBP (picture-by-picture) modes.

Gamers are already going to need a monstrous GPU to drive a screen this big at 60fps, so having a display that can refresh quicker than that is rather pointless. While professionals working with color are likely to pass this design by, because the TN technology in it just isn’t consistent enough for color matching, if you simply want a desktop the size of Kanye West’s ego, this is the model for you. Just don’t expect it to be a flexible solution you can use in a wide range of situations.

If I’ve got a real complaint about his design it’s that it’s not quite as cutting edge as I might have hoped. This product should really come with DisplayPort 1.3 and HDMI 2.0; the lack of that latter standard means that it can only hit the 60Hz refresh rate when connected via DisplayPort.

With that thought in mind, I will now wait for a fourth bowl of oaty goodness; metaphorically speaking.

A big screen at a reasonable price, but only for business users.