If you have the room, a bigger display always looks better. The same cannot be said for bigger pixels – the smaller the better. Although more affordable 32in monitors are beginning to muscle in on 24 and 27in models, they often come with a relatively low resolution of 1920×1080 – fine for watching TV, not so good for Windows, especially when you’re sitting close to the screen. Unfortunately, you tend to pay a lot more for monitors with higher resolutions. 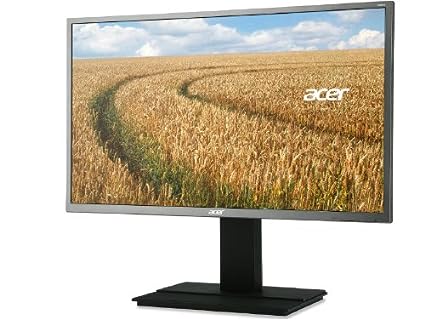 The Acer B326HUL packs in 2560×1440 pixels. It’s never going to compete with Apple’s iMac 5K, which has twice as many pixels again (squeezed into a smaller 27in screen), but the B326HUL gives you sharp images, clear icons and legible text.

Sharp images still won’t look great unless color and contrast are up to scratch, and this is where budget monitors often fall down. Fortunately, this monitor has exceptional color accuracy, with the sort of range that really brings out the more vibrant colors. It also has very high contrast levels, so detail in even the most subtle shades – such as darker areas in l videos and photos – are clearly visible.

Because of its sheer size, this metallic-style monitor is a rather obtrusive presence, and despite its flat design, the 348x264mm base requires a substantial amount of free desk space. You’ll ideally want to sit a little further away than you normally would, or you’ll be constantly swivelling your head to see the furthest edges of the screen. Helpfully, you can adjust the height by anything up to 15 cm, and a built-in turntable lets you point it in the direction of your choice, or swing it around to show others something on screen.

Four USB 3.0 ports – two on the side and two on the back – connect keyboards, mice and USB drives to your PC. For video input there are two HDMI sockets, one DisplayPort (for Mac users) and one standard DVI monitor port.
Not everyone will need a screen this big, but for those who want even bigger, there are 34in ‘ultrawide’ monitors, for example, with the same 1440-pixel height but a 3440-pixel width (providing a handy alternative to using two separate displays). Or you could choose a 4K (3840×2160-pixel) model such as Philips’ elegant BDM4065UC. For the price, though, the B326HUL is a great choice and really good value.

At 32in this impressive display will need a lot of room, but its high-quality specifications guarantee that bigger is better in this case.