Univention Server 43 Review – One learns to appreciate a well-designed management interface when battling the common cold, as a snuffly Shashank Sharma discovers…

As with most of its peers, Univention Corporate Server is aimed at SMBs and enterprises. While its does enable users to install the KDE desktop environment, it’s far too specialised to ever appeal to casual or home users.

The distribution boasts of a rather uncomplicated installation process. Its choice of Debian as the base makes Univention incredibly safe and secure, and you can easily install additional components such as an anti-virus and a firewall. 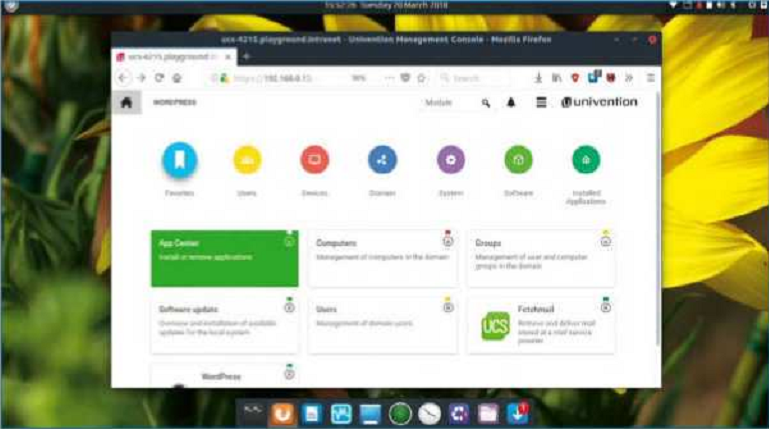 The installation makes it possible to configure the partitioning scheme and even choose the packages you wish to install. You can, for instance, choose to install the KDE desktop and Fetchmail, Cups and various other essential components.

Unlike other server distributions. Univention provides a severely restricted root account, and you’re advised to log in as the Administrator using the root password that you configured during the installation.

When you first log in. you’ll be dropped to a sparse portal page, which provides a central view of all available services in your Univention installation and a link to the Univention Management Console (UMC). You can think of UMC as the central configuration hub of the web- based interface. It features a number of labels at the top of the screen such as Users. Devices, Domain. System and Software. The interface is fairly intuitive and easy to navigate. You’ll find most of the configuration options tucked away under the System label on the dashboard.

When you click Software, the interface provides a list of all installed and available software. You can click any software, such as NextCloud, and will be provided pertinent details such as features and the software licence. Some software such as NextCloud and WordPress is installed within unique Docker containers, and the distro points this out before starting the installation. Unfortunately. Univention doesn’t provide the total download size when installing packages.

The latest release has seen a lot of work on the web portal. You can now tweak the appearance of the different pages, and move elements around via drag and drop. With its advanced user management, you can also tweak the content displayed to the users based on their group membership, permissions and other parameters.

Another new feature of the 4.3 release is the use of Kerberos to provide single sign-on. When users now log in to Univention, they’ll immediately have access to the configured accounts on services such as Office 365 or Nextcloud, without being asked to login separately.

A typical business server naturally comes with a learning curve, but thankfully Univention provides not only a quickstart guide but also forums to tap the user community for assistance. You’ll also find a host of detailed tutorials and screenshot-aided guides on a variety of topics. If you’re interested in commercial support then the project also provides different subscription models, with enterprise support and a maintenance guarantee for €290 per year.

We did a Roundup on business server distributions nearly nine months ago in LXF227 in which Univention Corporate Server 4.2 fared rather poorly, despite finishing strongly in almost all the tests. With the first release since then, the distribution has targeted almost all the core quirks that cost it a podium finish.

Security updates for each release are offered until six months after a subsequent release something that commercial outfits in particular will appreciate.

Based on Debian 9, Univention is intended for SMBs and enterprises. Its web-based management interface can be used to install additional software and configure the various elements of the distribution. Where possible, the distribution uses Docker containers and now supports more than 90 different modules such as a printer and file server, web proxy, virus scanner and more. Also see Zentyal, ClearOS and NethServer.

Performance has vastly improved, while Docker containers and features such as single sign-on are all much appreciated.