Endless OS 3.3.11 Review – Shashank Sharma wonders if the distribution itself is endlessly impressive or, considering its hefty 15GB download size, just a vast heap of data.

With Debian as its base and featuring a custom Gnome desktop, the distro ships two variants. The 2GB ISO is a fully functional distro, but lacks some useful applications. 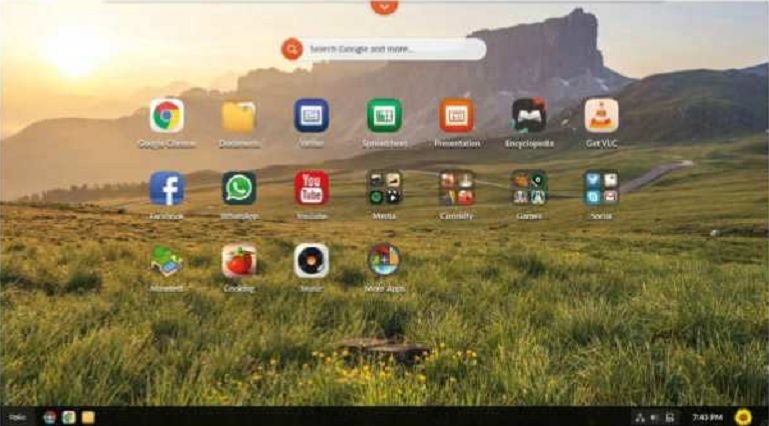 The 15 GB variant ships with 100 applications pre-installed. It features a customised Gnome desktop, offering a touch- friendly interface. Its focus on Flatpak for package management makes it stand out from peers such as Elementary OS and Ubuntu.

With its highly customised Gnome desktop, Endless OS is unlike any other popular desktop distribution.

Although based on Debian, Endless OS has a significantly different approach to software management and system updates. In fact, the use of apt or any other package management system, is deprecated as the distribution uses Flatpak to provide applications to users.

Surprisingly, unlike all other Linux distributions, Endless OS can’t be dual-boot with another instance of Linux, but can co-exist with Windows. This and other departures from common Linux practices make the distro an easy-to-use alternative for non-technical and new users.

Originally available only on Endless’s budget machines, the distribution now ships two variants. If you want easy offline access to Wikipedia, as well as the thousands of tutorials and how-tos hosted on Wikihow, and a lot of other resources, you must choose the full version, which weighs in at an unbelievable 15GB. The behemoth version also boasts of 100 applications across categories such as games, multimedia, and various educational and learning tools for children such as Scratch. Unlike other desktop distributions which can safely be installed on even a 10GB partition, and still leave plenty of room for you data, Endless OS recommends at least 32GB, and the default installation takes up 20GB of disk space.

The distribution gives you the option to run it off a USB stick. If you’re not going to dual-boot with Windows, Endless OS will take over the entire disk and the installer requires very little input from users. You’re not even permitted to provide a custom layout for the distribution, such as a separate/home partition.

Most of the setup, such as configuring social media accounts and other personalisation are relegated to the post-install configuration wizard. When done, you’ll be dropped to an almost unrecognisable Gnome desktop. Its design lends itself towards touch-screen devices as is evident from the lack of any application launcher menu, which is a standard fixture on most desktop environments.

You can use the global search bar to look up the applications, and even to search the web. Many applications such as the terminal aren’t featured on the desktop. To access these, and majority of the other 100 applications, you must launch the App Center. If your

The custom Gnome desktop features several rows of applications. Click Curiosity or Encyclopedia to understand the reason for its vast download size.

favourite everyday applications aren’t already on the desktop, you can open them in the App Center and click the Add to Desktop button.

Although the distribution features a media player and supports a variety of audio formats, most of the popular proprietary formats aren’t supported out of the box. But you can purchase the codecs to enable Endless OS to play mp4 and other formats.

For users with access to high speed, FUP-free internet access, the distribution’s default setting of automatic updates wouldn’t be a problem. The use of OSTree to install atomic updates which don’t affect the running state of the distro is another departure from its Debian roots. With the distro increasingly relying on Flatpak to provide applications, don’t be surprised if you can’t find some popular ones in the App Center.

There’s no denying the usefulness of a distro like Endless OS. Especially since it can be a great learning tool, while also shielding youngsters from the nasty parts of the internet. Sadly, it requires more resources than its popular peers like Ubuntu, Fedora and others, and at times feels slow even with 4GB RAM.