Leaning back in his chair while testing the latest iteration, Mayank Sharma wonders if it’s time Ubuntu should only put out LTS releases? Read our Ubuntu 18.10 Review. 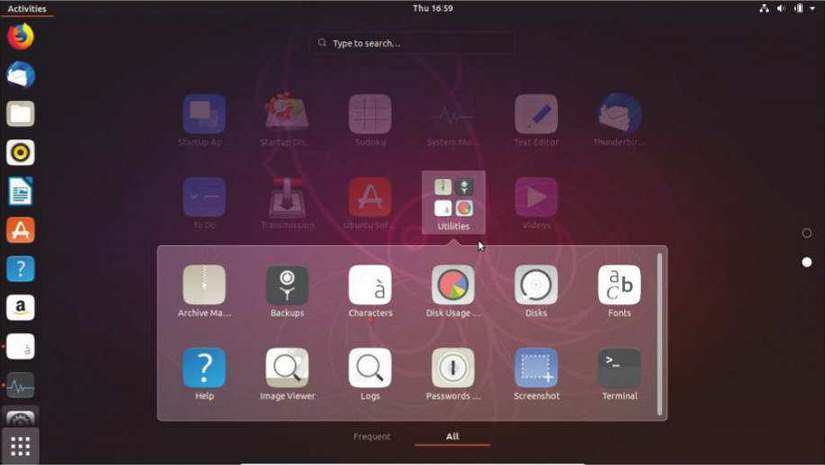 The desktop experience feels smoother thanks to Gnome’s performance improvements.

One of the most popular Linux distributions that’s helped Linux break into the mainstream. The project has recently shuttered a whole lot of its desktop-related initiatives. Most noticeably, after a few years of alienating users with its Unity desktop, it’s switched back to the Gnome desktop interface, which it continues to polish to meet its requirements.

You don’t have to look very hard to notice a pattern to Ubuntu releases. After a couple of releases that’ll bring maverick changes, the distribution puts out incremental upgrades for a few release cycles before stirring the pot once again. Ubuntu currently finds itself in this tremulous period having had its first LTS release without the Unity desktop and its much-touted Wayland display system swapped out in favour of X.org. The current Ubuntu 18.10 release dubbed Cosmic Cuttlefish is where the curves begin to normalise once again as the distribution settles into a rhythm. 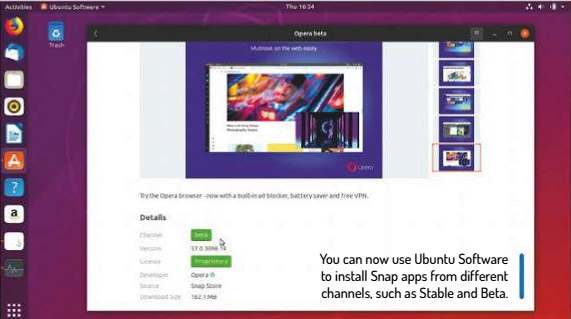 The most noticeable change in Ubuntu 18.10 is its new lick of paint. With Gnome back in the Ubuntu desktop, the distribution has been hard at work acclimatising it per its needs and requirements. The Ambiance and Radiance themes have finally been retired with a new theme dubbed Yaru that looks more modern and flatter. The theme is well complemented by the Suru icon set.

However, the vast majority of notable improvements in this release are tucked away out of sight. The release runs on Linux kernel 4.18 whose headline features include complete support for the Raspberry Pi 3 B and the 3 B+ models, along with improved support for Thunderbolt and USB Type-C devices. The other noteworthy features of this kernel are its many improvements for gamers. It adds support for AMD Radeon RX Vega M graphics processors and also has a reverse-engineered Steam Controller driver that enables the Steam Controller to work as a regular HID input device out of the box. Ubuntu 18.10 also updates the X.Org Server to the significantly improved v1.20.1. Another behind-the-scenes change is the use of LZ4 compression instead of the older gzip compression for the initramfs ramdisk. This change will make itself known in the form of faster boot times. The developers claim reductions up to 10 per cent, although we don’t have any hard metrics on it.

The Ubuntu 18.10 desktop also benefits from the improvements to the Gnome Shell. The upstream developers have been polishing the desktop to improve 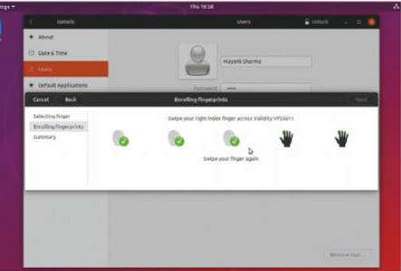 Ubuntu developers reason that fingerprints are equivalent to usernames and should thus be used to unlock a session that has already been logged into.

performance of the various components. Ubuntu 18.10 includes Gnome 3.30, which uses fewer system resources than ever before, while significantly improving the user experience. The distribution also benefits from improvements to the de-facto Gnome apps. The most significant of these is the Disks utility that can now decrypt and mount storage volumes encrypted by VeraCrypt, thanks to the efforts of the Tails distribution.

There are also some peripheral-related improvements that are apparent in the 18.10’s Settings app. It gets a new dedicated section for handling Thunderbolt 3 devices.

Also in its bid to declutter the interface, Settings now has dynamic panels that only show up when they can find compatible hardware. You can also use a fingerprint scanner on your laptop to authenticate yourself without having to put in any extra work or pulling in libraries.

One major Gnome component that hasn’t been updated is the Nautilus file manager. Ubuntu 18.10 continues with the older v3.26.4 because it was the last version of the file manager to support desktop icons.

Work on an extension to provide desktop icons is already underway and we suspect it’ll make its way into the Ubuntu desktop soon, because it can’t keep ignoring the usability and visual improvements being introduced in newer releases of the file manager.

Another thing that hasn’t made it to the final release is the Android integration with the GSConnect Gnome Shell extension. It’s still available in the Universe repository though and while the Ubuntu developers didn’t consider it ready for inclusion just yet, it remains one of the top apps you should install on top of a pristine 18.10 installation. Similarly, the Ubuntu developers wanted to include DLNA media server streaming capabilities to the desktop, but couldn’t because of tight deadlines.

On the software front, the distribution continues to make strides towards integrating Snap packages on the desktop. The xdg-desktop-portal frontend now also supports Snaps, which is being touted as an usability improvement that’ll help sandbox tools on the desktop. 18.10 also ships with three Snap programs by default (Calculator, System Monitor and Characters) and there are over 4,000 more in the official repositories.

Yet despite all these changes, Ubuntu 18.10 isn’t an automatic upgrade option for everybody. That’s because if you’re already running Ubuntu 18.04 LTS you’ll be officially supported through to early 2023. In contrast,

Ubuntu 18.10 will only receive security updates, bug fixes and updates for a period of nine months, forcing you to upgrade your installation to a new release sometime in the middle of 2019. On top of it, many of the desktop enhancements and program upgrades in 18.10, such as the new theme, have already made their way into 18.04 and others like the xdg-portals support will eventually trickle down after going through more testing.

This, along with the shorter support period, means that unless you really need the improved hardware support and performance updates, existing 18.04 users can continue to stick to their LTS installations and wait for the upgrades to make their way into the 18.04 repositories. If, on the other hand, you’re a non-Ubuntu user waiting to test the waters, Ubuntu 18.10 is just as good an Ubuntu release as any.

A run-off-the-mill non-LTS Ubuntu release with a clutch of upgrades that'll make their way into the LTS release.

» AND IN OTHER UBUNTU NEWS

There’s more to an Ubuntu release than just one distribution. Along with the official flavours, a new Ubuntu release fuels a number of derivative distributions, many of which release updates soon. Perhaps one of the biggest changes to this ecosystem is the dropping of the 32-bit ISO. While many Ubuntu flavours still provided 32-bit ISOs for download for the 18.04 LTS release, a number of them have stuck only to 64-bit for the current 18.10 release. These include Kubuntu, Ubuntu Mate, Ubuntu Budgie and Ubuntu Studio. Of course, the lack of a 32-bit installation medium won’t prevent existing 32-bit installations from upgrading to the newer release via the repositories.

Besides the desktop releases, Ubuntu’s other major initiative, Ubuntu Server also gets a handful of upgrades. In its release announcement Canonical pointed towards its focus on the financial services market: “This year, the financial services industry has engaged significantly with Canonical and Ubuntu for infrastructure efficiency on-premise and to accelerate their move to the cloud. The push for machine-learning analytics and of fintech efforts around blockchain, distributed ledger applications and cryptocurrencies are current drivers of Ubuntu investments and deployments.”

What it really means is that Ubuntu Server can now also serve the financial institutions along with its other enterprise customers to incorporate private clouds into their infrastructure. Ubuntu Server 18.10 images are available on all major public clouds. To host private clouds 18.10 includes OpenStack’s latest Rocky release that’s designed to address emerging use cases such as edge computing, network functions virtualisation (NFV) and machine learning. There’s also LXD 3.0, which is the first release that can join identically configured LXD servers into a cluster and Kubernetes 1.12 for deploying containerised apps.