Mayank Sharma was expecting fireworks when Ubuntu switched to Gnome. Yet Fedora is still the undisputed premier Gnome-based distro…Read our Fedora 29 Review.

One of the marquee RPM- based desktop distributions that continues to offer the best Gnome desktop experience. Many of its full-time core developers are employed by Red Hat. which uses the Fedora project to introduce and polish virtually all of the components that eventually make their way into its enterprise offerings. 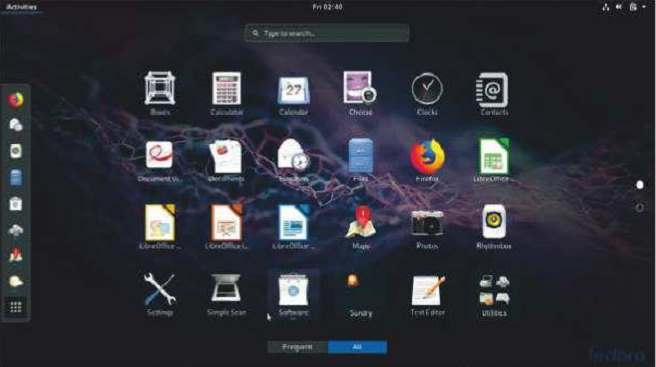 Fedora 29 is the first major Gnome-based distribution to be released this month.

However, the two (Ubuntu being the other) have little in common besides their shared desktop environment.

Fedora is the test bed for Red Hat Enterprise Linux’s (RHEL). This is perhaps why it takes a more bleeding-edge approach than other desktop behemoths like Ubuntu. For instance, while Fedora 29 Beta runs on top of the Linux 4.18 kernel, the final release will be based on v4.19. which was undergoing testing at time of writing.

There are various other differences between the two. Unlike Ubuntu 18.10. Fedora Workstation 29 uses the Wayland display server by default. The release also uses the performance-enhanced Gnome 3.30 and gets all the improvements of the release as mentioned in the Ubuntu 18.10 review. The performance improvements are apparent when you do load-intensive tasks in the distribution while it runs on virtual hardware.

However, unlike Ubuntu 18.10. Fedora 29 aims to maintain the default Gnome experience. The most visible difference between the two Gnome 3.30-based distributions is the missing support for desktop icons in Fedora 29. This is because desktop icons were never part of the Gnome 3 design goals, and starting with v3.28 the developers decided to axe the six-year-old unmaintained code from the Nautilus file manager.

As mentioned in the Ubuntu 18.10 review. Ubuntu gets around the desktop icons issue by including an older version of Nautilus. On the downside Ubuntu misses out on all the enhancements in Nautilus 3.30. such as the new breadcrumb location bar. the integrated search bar. dynamic resizing and others. A Gnome Shell extension to display desktop icons that’s under development will bring parity between both the distributions in this aspect.

Another difference between the two distributions is their preferred choice of application virtualisation platforms. What Snaps are for Ubuntu. Flatpaks (see page 72) are for Fedora. Many Gnome programs, like Games. Recipes and the new Podcasts app. aren’t even available in the official Fedora repositories and are instead meant to be installed as Flatpaks. You can install Flatpaks from the Software app after enabling support for Flathub. To this end. the Software app in Fedora 29 now enables you to automatically install updates for the Flatpak apps as well.

The interesting new development in Fedora 29 is the availability of modular repositories for Fedora flavours.

Fedora 29 missed its original release date due to a handful of open bugs, but should be out by the time this issue hits the stands.

The modularity concept was introduced in the previous release cycle, but only for the Fedora 28 Server edition. Modularity enables users to run multiple versions of the same software in isolated containers. This arrangement helps you use thoroughly tested versions of programs and libraries in production while you play around with their bleeding-edge versions, without worrying about one interfering with the other. Besides these, it’s a fairly standard update with mostly incremental changes. If Fedora 29 is the only OS installed on the computer. GRUB will boot straight into it without displaying a boot menu. In addition, the overhauled GTK3-based Xfce 4.13 desktop is available from the official Fedora 29 repositories.

Going beyond the desktop, there’s more to Fedora 29 than the Workstation edition. There’s also Fedora Server and Fedora Atomic Host for hosting containers, which has now been rebranded as Fedora Silverblue. The developers also claim that Fedora 29 is also more ARM friendly than before. Enabling zRAM support for swap on ARMv7 will improve the distributions’ performance and reliability on ARM devices with limited amounts of RAM such as the Raspberry Pi.

An incremental update to the Fedora family of releases. The Gnome 3.30-related enhancements alone make it worth recommending for users of the desktop environment.