Trisquel GNU/Linux 8.0 Review – You can be forgiven if you haven’t heard of Triequel; the distribution had its last stable release over four years ago. But, as the release announcement notes, the Free Software Foundation (FSF) has boon using it to run the LibrePlanet conference since last year, and it powers all of its new server infrastructure as well. 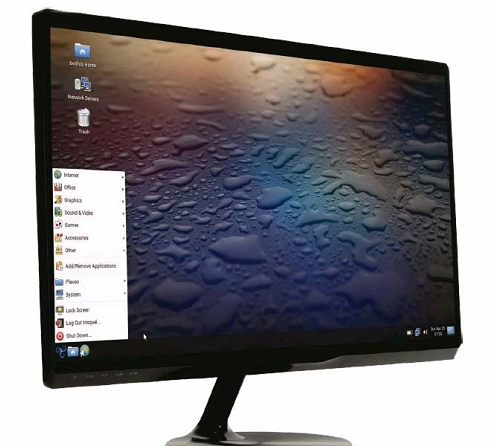 Above Besides the 2.5GB main release, Trisquel also has a 950MB Mini edition and a TOAST edition based on the Sugar environment.

Trisquel was initiated by students of the University of Vigo in Spain who wanted to create an educational distribution that supported the Galician language. But the project soon outgrew this initial scope and became a fully free distribution with multilingual support. Trisquel was officially presented in April 2005 by Richard Stallman himself, and is now headed by FSF board member Ruben Rodriguez.

To the casual user, it might appear that the Ubuntu-based Trisquel simply rouses upstream packages after stripping the non-free packages that don’t adhere to GNU’s guidelines for free software. But there’s more to Trisquel than just repackaging Ubuntu, because finding the non-free stuff is a non-trivial task. In addition, when the developers take cut a non-free component, they also have to ensure they slot in the free version without adversely affecting other components, which is an involved and cumbersome process.

The distribution uses the Linux-libre kernel that takes the Linux kernel as a basis and removes any software that does not include its source code, or which releases its source code under a proprietary licence. But being totally free (as in speech) is not the only objective of the distribution. Its developers also strive to make Trisquel look appealing and simple to navigate. 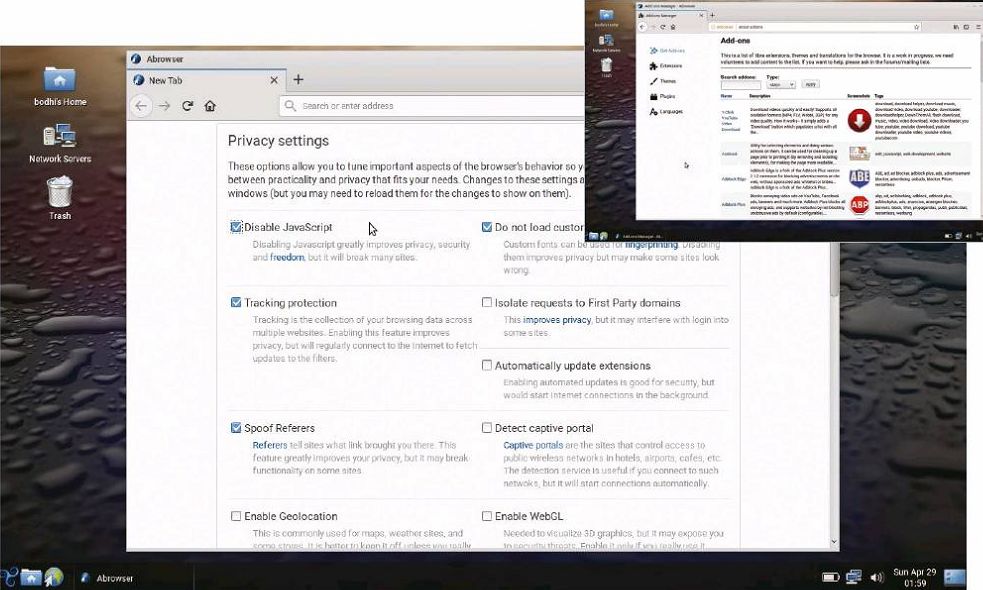 Above Trisquel’s Abrowser is setup to only pull free software add-ons from Trisquel’s own repository.

When the developers take out a non-free component, they also have to ensure they slot in the free version without adversely affecting other components to ensure the security and privacy of their data. Unlike other distributions, the Trisquel installer by default asks the user to encrypt their installation by providing a security key. You can also opt to overwrite empty disk space for more security.

The biggest change in Trisquel 8.0 is that the distribution has switched from GNOME to the MATE desktop environment, because the former’s 3D compositor functions might require proprietary drivers to function properly. Trisquel is late to the MATE party thanks to its extraordinarily long development process.

Another disadvantage of this long development cycle is that Trisquel 8.0 is based on the previous Ubuntu LTS release 16.04. The good news, however, is that work on Trisquel 9.0, based on the latest Ubuntu 18.04 LTS release, is already underway. It should be released in around six months, which is the usual time it takes Trisquel to rip out the proprietary parts from an Ubuntu release. That said, you shouldn’t skip Trisquel 8.0 in the meantime since the team will support this release with security updates until April 2021.

Trisquel 8.0 packs in the usual slew of mainstream apps such as LibreOffice and VLC, but also replaces some to keep in line with its objective. Web browsing duties, for example, are handed over to Abrowser, which is Trisquel’s unbranded version of Firefox. According to the release announcement. Abrowser has also been audited and tweaked to maximise users’ privacy without compromising usability. The browser will not establish any network connections on its own, unlike its peers that automatically connect in the background to check for things such as extension updates and geolocation. Abrowser also has a list of accessible privacy-enhancing settings. Those are displayed prominently whenever you fire up the browser or switch to a new tab.

Besides the bundled software, you also have access to over 25,000 free software packages in its online repository, according to the release note. This figure is particularly impressive when you consider the fact that the distribution developers renew and customise each and every package to make sure it doesn’t contain any non-free bits.

A fully functional and feature-rich Ubuntu derivative that puts users in charge.

There’s an unsteady pace of development, and it’s based on the previous upstream LTS release.

The effort put into making the distribution conform to FSF’s stringent requirements without taking away core functionality is laudable. There’s a fine line between ideology and pragmatism and Trisquel GNU/Linux is perhaps the only distribution that ably manages it.

The effort put into making the distribution conform to FSF’s stringent requirements without taking away core functionality is laudable. There's a fine line between ideology and pragmatism and Trisquel GNU/Linux is perhaps the only distribution that ably manages it.