The evolution of iPhone and iOS 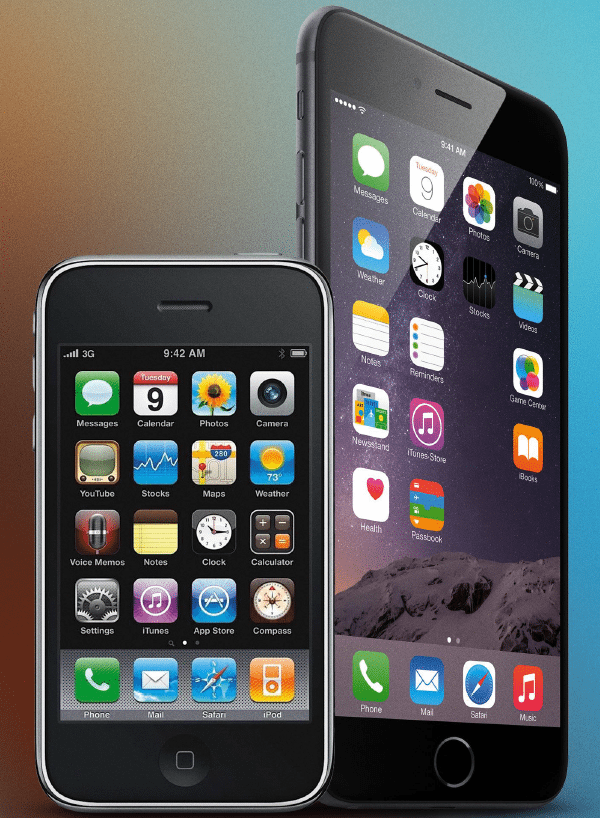 An exciting past, present and future. THE DEVICE THAT TRANSFORMED PERSONAL COMMUNICATION – AND WHAT’S NEXT

Where were you when the late Steve Jobs stepped onto the stage of the Moscone Center in San Francisco in January 2007 to debut the very first iPhone, one of the true consumer technology game-changers of recent times? Wherever you were and whatever you were doing, chances are that the mobile device you then had in your pocket was nothing like the genre-transforming smartphone that was already etching its place in history – a history that has continued to be made since then.

To get a sense of just how profoundly the iPhone has impacted on today’s modes of personal communication – even for those who have never actually owned Apple’s incredible handset – it is instructive to refer back to Jobs’ observations back in 2007, that phones then typically fell into one of two categories. They were either powerful but extremely complicated to use, or easy to use but rather limited in their range of features.

Naturally, Apple wanted something that someone didn’t need to be a boffin to operate, but which was also more powerful than its competitors – and the first reviews at the time testified to how successful the Cupertino firm had been at creating just that.

A contemporary TechRadar review, for instance, declared the iPhone “a stellar debut for Apple in the mobile phone market” on account of such features as its MultiTouch touchscreen controls, intuitive interface and simple iTunes syncing, concluding that it had “changed the mobile device landscape. For the better.”

A FLAWED DEBUTANT, BUT IMPROVEMENT WAS TO COME

But even those early reviews acknowledged that as brilliant as the iPhone was to use, it was far from the perfect device, with gripes centering on the likes of its incompatibility with 64-bit Windows, fixed focus camera and absence of 3G.

TechRadar writer Roman Loyola was perhaps proven right in 2007 in his advice to readers that “perhaps iPhone 2.0’s the better deal for you”, not least given that the second generation device – the iPhone 3G – was even named after the aforementioned high-speed connectivity technology. It was also thinner than the first iPhone and featured a plastic back. Much more important, however, was that it also incorporated support for the newly launched App Store for the first time.

The App Store proved to be just another trailblazing development for an Apple that couldn’t seem to stop instigating them, with an influence that continues to be felt profoundly today. Whereas, back in 2008, smartphone apps were generally pretty crude and offered little scope for involvement from outside developers, the Apple App Store has now generated around $40 billion for developers as of January 2016, while spawning imitators by Android and Microsoft alike – a subject that we cover in more detail later in this article.

HOW AN ETHOS OF EVOLUTION PROVED CRUCIAL

From the support for in-app purchases that the third-generation iPhone software – iOS 3 – introduced in 2009 and the debut of Siri on the iPhone 4S in 2011, to the 2010 appearance of FaceTime video chatting and iOS 7’s dramatic transformation from a skeumorphic to a flatter aesthetic, the iPhone and iOS have generated some truly amazing innovations down the years.

No less important, however, has been the Apple development philosophy that has been instrumental in keeping it ahead of increasingly determined competitors. While certain rivals have tried to keep pace by piling seemingly endless new features into their devices, Apple has taken a slow, methodical approach to improving each iPhone and iOS version from the last.

Paradoxically, such incremental change has given owners of the latest version of Apple’s iconic iDevice a markedly different technology offering and user experience than they would’ve had even just a few years ago, with the rounded app icons displayed in a grid formation almost the only thing that the first iOS seems to have in common with the most recent, iOS 9.

MANY FOLLOWERS – SOME BETTER THAN OTHERS

As does tend to happen when a groundbreaking and instantly popular new consumer technology product emerges, many other manufacturers are quick to get in on the action. Sure enough, the first iPhone’s influence was immense, with even early Android team member Chris DeSalvo once quoted as saying about the Apple handset that “as a consumer, I was blown away. I wanted one immediately. But as a Google engineer, I thought, ‘We’re going to have to start over’.”

Such have been the lessons taken by the development brains behind Android from the iPhone and iOS, that they have sometimes been described as un-innovative copyists, rather than true pioneers in their own right. Even the recent Android 6.0 Marshmallow update has incorporated various features from iOS 9, including the likes of a native fingerprint sensor support and a floating bar with ‘cut’, ‘copy’ and ‘paste’ buttons when users select a string of text.

That said, the persistent image of Android as slavish imitators may be a little undeserved given the evidence of the many features that Apple has taken from the Google OS, such as dynamic wallpapers, 4K video recording and stylus support (think the Apple Pencil and its resemblance to the styluses that the Samsung Galaxy Note phablets and tablets have had for years).

SAMSUNG, MICROSOFT AND OTHERS TRYING TO TAKE CHASE

Of course, if we’re on the subject of Samsung, we might as well put forward the South Korean conglomerate as possibly the worst offender in the Apple-aping stakes – not for nothing did a federal appeals court late last year order the company to cease copying certain iPhone features, including Apple’s slide-to-unlock, autocorrect and quick link software. That said, this latest victory for the Californians simply concludes the latest battle in a several-year war between the two tech giants over alleged copying, so we’re sure that many more twists and turns await.

Let’s not forget, though, that the fight for the future of smartphone technology is not merely being waged between Apple, Samsung and Android. Such smaller players as Firefox, Jolla – the Sailfish OS maker that now consists of separate hardware and software businesses – and newcomer Acadine Technologies are threatening to make life interesting for the established names in years to come.

Nor should we entirely overlook the muchmaligned Windows Phone. Sure, 2015 may have been bad enough for the platform to be described by one writer as “the year Windows Phone died” amid declining sales, mass firings at Nokia’s ex-mobile division and the disappearance of apps, but there is still the hope that 2016 and future years could see an unlikely rejuvenation.

It has been reported that Microsoft is pinning its hopes for the newest version of its mobile OS – Windows 10 Mobile – on the concept of ‘universal apps’, apps that can be tailored to run across the range of Windows 10-running desktop, phone and tablet hardware, and even the Xbox, with relatively little modification to the underlying code.

Such developments at rival firms are likely to be keenly watched by Apple’s head honchos as they plot the next moves that will keep the Cupertino concern at the forefront of a technology landscape continuing to transform at a pace even Jobs may have been amazed by.

There has been much talk about what could be the next big technologies for future iPhones – maybe we’ll see some form of Li-Fi technology, with its ability to transmit data more than 100 times quicker than Wi-Fi, or perhaps our attentions should be captured more by the prospects of scalable 3D Touch technology or eye-tracking software?
Whatever directions current CEO Tim Cook and the wider company decide to take the iPhone in next, we’re sure those directions will be not only exciting, but also ready to make the most of from the moment a new device incorporates the given new design, feature or technology. The story of the iPhone and iOS is a long way from over, and indeed, who is to say that the most glorious moments for this iconic hardware and software pairing aren’t yet to come?