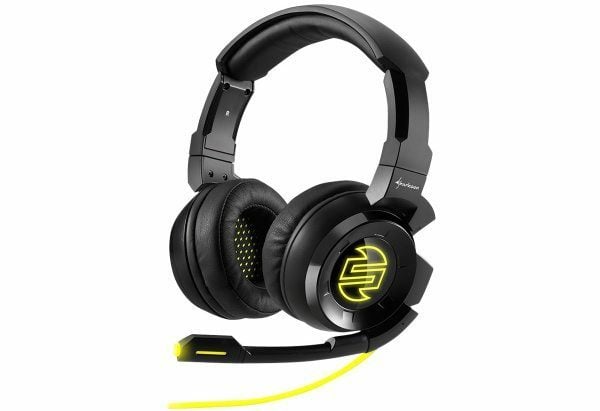 A new headset that sounds too good to miss

The recently released Sharkoon Shark Zone H40 headset looks to take on the current shelf favourites – Turtle Beach, Roccat and Razer – but does the H40 have what it takes to make an impact? The H40 takes on the visual aesthetic of the rest of the Sharkoon Shark Zone range, a matte-black finish with a helping of bright yellow. In the case of the H40 headset, the flashes of yellow come from the lengthy cable and LED lit ear cups, complete with Sharkoon logo and an LED at the tip of the mic.

The design works well throughout, from the comfortably padded headband down to the equally padded ear cups. The mic swivels around the outer diameter of the left ear cup on a kind of hidden hinge affair that works exceptionally well. The headband itself is adjustable and can fit child- to adultsized heads easily enough, but there’s not a lot of movement from the ear cups themselves. However, they are padded enough to ensure there is a good level of external environment noise cancellation.

There are a decent sized pair of 50mm drivers housed in the cups, that output to a very good quality. Bass is good, midrange frequencies are clear and there’s even a reasonable higher range on offer here. Naturally they can’t quite hit the same levels of clarity as say a Roccat Kave XTD, but once you’ve got them on and immersed in either gaming of watching something you’ll barely notice the difference.

The microphone is also well designed, and projects your voice clearly – without any hint of distortion or excess background noise. Again, we like the ratchet-feel of the way it can swivel out of way and the active, yellow power on indicator. There’s a basic control in-line, which allows you adjust the volume level and a sliding button for powering the mic mute on or off. The remainder of the cable then terminates in the standard mic and ear jacks and USB to provide power for the LEDs. One thing we would have liked would be a slightly longer spread of the three terminating connections. There’s probably about 11″ from the cable joint where it branches out to the three connections and while that’s usually enough, we did have to juggle some connections to have each connection reach their port. Perhaps another four inches would be helpful?Aside from that there’s little fault the H40. The sound is perfectly fine, the mic is good and the headset is more than comfortable to wear for any length of time. Furthermore, the price is nicely pitched for the shelves as well. The Sharkoon Shark Zone H40 isn’t going to break the bank, but it does deliver as well as the competition.

We were quite impressed with the H40, as we have been with most of the Sharkoon products we’ve had of late. Although you may be able to grab a headset for near half the price of the H40, we’re willing to bet it’ll lack some of the features of the H40.

A perfectly good headset at a reasonable price.