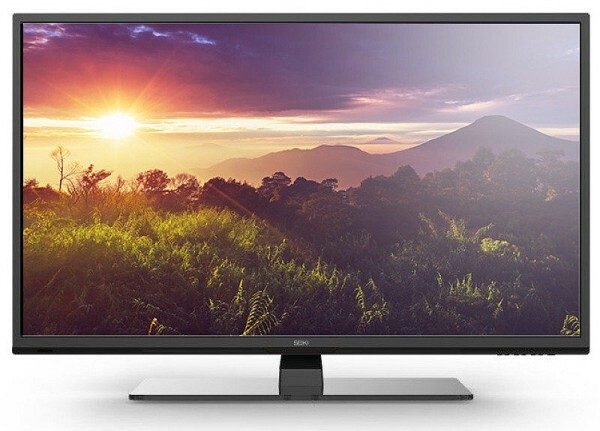 No, that isn’t a typo on the price, this 4K TV really is £210. We’ve even found it on sale with free delivery from one particular UK online retailer. My first thought was that, surely, this is too good to be true – and in many respects that’s precisely what it is.

Unboxing the Seiki SE39UA01UK was full of surprises, not least how light a 39” TV can be these days. Even with the stand this TV weighs in at just 7.6kg. Indeed, it can be easily wall mounted using the VESA 100 mounts on the rear. Along with the TV, Seiki provides a decent sized remote, a HDMI cable, and some component and composite adapters. That’s more than most TV brands give you, and useful for anyone with a console or Sky/Cable box they want to attach.

In terms of connecting devices, this TV is reasonably well specified. It has three HDMI ports (all 1.4), VGA, SCART (yes, really…), in addition to the YPBPR and AV phono options that the included adapters add to the options on offer.

There is also a single USB port, designed to allow you to use an inbuilt PVR function and present photos, music and video in a very limited selection of formats.

These features are all sideshows really, because when you get this device powered up you really want to see glorious 4K, don’t you? The panel sports a native 3840×2160, and connecting a PC using HDMI it automatically dropped into that mode to present a desktop so huge that the pointer needs a Sat Nav to find its way around. However, it also revealed a rather huge caveat regarding the Seiki SE39UA01UK and its Ultra HD capabilities: because it only has HDMI 1.4 ports, the 4K resolution it supports is limited to a 30MHz refresh. This limitation, combined with the processing adding further lag, meant that the pointer was a good 350ms behind any mouse movements.
Gamers generally moan when a monitor introduces more than 30ms delay, making this lag level totally unacceptable. Dropping the resolution to 1080p didn’t help, as it still doesn’t support the headline 120Hz in that mode. Therefore as a monitor option the Seiki SE39UA01UK is a bust, unless it’s to show slides or something else that doesn’t require any screen interaction or high frame rate.

I’ve read reports of people flashing this TV’s firmware with one meant for the 50” model and enabling 120Hz at 1080p, but I can’t confirm this and it isn’t anything I’d recommend you try for yourself. It’s really up to Seiki to release an official update to address those limitations but, as it makes other products that specifically do those things already, I’d be shocked if it upgraded this one any time in the near future. Or ever, in fact.

The lack of 60Hz refresh on the top resolution is a real deal-breaker for a number of reasons. One being that Sky has already said that, when it finally brings in its 4K sports service, it will be broadcast at 60Hz. That chops this TV’s 4K viewing options off at the kneecaps even before the services have been launched.

That leaves the Seiki SE39UA01UK as just a basic TV. In some respects it is fine as just that, though it’s not without a few other limitations. The decoder electronics in this device seem to have been borrowed from something much older. I almost immediately came to this conclusion because it not only searches for analogue services that don’t exist here any longer, it only supports SD digital streams. Therefore, unless you hook this up to a SKY HD box or an external Freeview HD decoder you won’t be seeing any live HD content on this set.

That was disappointing, as was the lack of a second USB port to power an external drive. That’s because it means the TV’s PVR functionality is limited to what you can fit on a USB flash stick. There are also a slew of other odd specification choices that I don’t really understand. There was, however, one I really objected to: the power cable being permanently attached.

Yet, what I kept coming back to was that, while this is technically a 4K TV, with the exception of you pushing something from a PC at it in 4K resolution, it would never be used for that purpose. In short, it’s a 4K TV for people who want to say they’ve got 4K without any real understanding of what that actually means.

The lack of even a decent HD decoder relegates the Seiki SE39UA01UK to a being a reasonably sized set that your granny can watch Corrie on; the price is good even for that purpose. My frustration here is that using the screen with a PC hints at what this panel could actually do had Seiki not wired it to some primitive decoding and processing hardware to nail the cost down to this admirably low level.

I’ve noticed that Seiki do make a 42” 4K TV with 60Hz capability. I’d recommend that, if you want less frustrating 4K functionality cheaply, you start there, and not here. Mark Pickavance

Not a practical 4K monitor, in case you were tempted.