It is evident that we genuinely do care about the battery life on our smartphones;it’s so quintessential. And it obviously hurts when your phone battery dies in the middle of an important conversation, right? So, what’s the solution? Evidently Samsung claims to have a phone with a 5,000mAh battery built-in. Oh wait, it still looks like a phone, a real phone. With the Galaxy A9 Pro, Samsung has put the massive into the Galaxy range as far as size goes – big display and a biog battery. But does it pull off this big gamble? It’s big, huge The first thing you will notice about the Galaxy A9 Pro is its similarity to the Galaxy A7 (2016). And you can tell this wasn’t a bad move, because both smartphones belong to the same family. From the curved edges around the display to the glass back, there aren’t too many changes. The capacitive home button on the front features a fingerprint sensor that works fast as per our tests. Its flanked by two touch buttons: one brings a list of open apps and one takes you back a step.

The chamfered metal sides houses physical buttons on both sides. The microSD card slot is situated on the top of the device, while you will find the dual-SIM card tray on the right. The left houses a volume rocker. The 3.
5mm audio jack, as well as the microUSB charging port and the speaker grille are all located at the bottom. 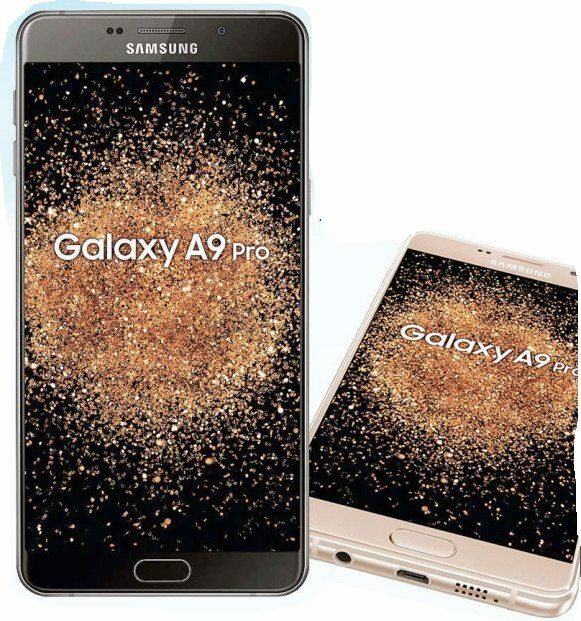 Despite looking thick (7.9mm) and heavy (210 grams), the phone is still gorgeous. The screen features virtually no side bezels and the buttons have a nice tactile feel.

We like the all-glass back and front, as well as its metal edging. Like any other smartphone with a glass back, the Galaxy A9 Pro is prone to fingerprints and smudges (obviously!), so a case is mandatory.

If there’s one design choice that could worry some, it is the size of the Galaxy A9 Pro.

Look, the phone is humongous with a 6-inches display, bigger than the Google nexus 6P (5.7-inch). Some might like the device, owing to a large screen size.

Others will not like it, simply because it’s too big. Again, it’s far from ugly but we’d like to clarify that the Galaxy A9 Pro does limit its audience. Sorry, ladies! Gorgeous display, good-battery life The Galaxy A9 Pro’s 6-inch Full HD display (1920×1080) uses a Super AMOLED panel.

The differences are noticeable right away, as the Galaxy A9 Pro shows deep blacks and vibrant colors.
viewing angles are fantastic, as is outdoor visibility. Everything looks great on the 6-inch FHD panel, especially games. If you are one of those who likes to watch lot of Web series on the go while commuting, the Galaxy A9 Pro is a perfect smartphone in our opinion.

Performance is satisfactory too. The Galaxy A9 Pro is powered by a Snapdragon 625 processor paired with 4GB of RAM, 32GB of native storage and microSD support. It’s not as fast as the OnePlus 3, the flagship smartphone with a Snapdragon 820 CPU and 6GB RAM, but it’s speedy still. The true standout feature of the Galaxy A9 Pro is that it never gets heated up, even after a long session of Asphalt 8. The processor seems equipped to handle daily tasks with aplomb.

The Galaxy A9 Pro is targeted at those who are constantly on the move, a medical sales representative, for instance.

For them, the smartphone’s battery life is critical and should typically last a day or beyond. The 5,000mAh battery fused inside the Galaxy A9 Pro is going to last roughly 60 hours (approximately 2 ½ days) based on our general usage. For a device with a high-resolution Full HD display, the battery life is more than good. And yes, it does support fast charging feature.

Samsung has been trying to revamp its TouchWiz UI for quite sometime. And it is evident from its recent efforts that the change is on the right tracks.

Its Galaxy A9 Pro is running its TouchWiz UI, based on Google’s Android 6.0 Marshmallow. The interface still looks a bit too colorful, but TouchWiz runs smoothly on the Galaxy A9 Pro.

It has been “toned-down” a bit; and everything looks and feels great. The big relief of us, though, is the lack of bloatware apps. The device still has a few apps onboard like Samsung apps, S-voice, Opera Max and Microsoft apps, among others.

By and large, though, major pointless apps have been taken off from the user interface. One more thing we are excited to share is the support of multiwindow (aka split screen) on the Galaxy A9 Pro. We wish the Galaxy A9 Pro had come with an S-Pen stylus, a feature that could have created more impact, given the size and processing power the device is capable of.

Looks Elegant looking, but too big in size Features Zippy performance; solid battery life Performance The single speaker is a bit of a mixed bag. Ease of Use TouchWiz UI runs smoothly. Value For Money Battery life puts the Galaxy A9 Pro in the forefront, but it doesn’t destroy its competitors.