Samsung C24FG70FQU Review – A screen that’s ahead of the curve

Secondly, this isn’t just any 24in panel. It’s billed as a ‘Professional Gaming Monitor’, but many of the things that might appeal to gamers will also appeal to anyone who wants a decent screen to work on. From the front, it looks fairly standard, with a neat black plastic case, slim bezels and a circular stand. Look to the side, however, and it’s anything but ordinary. The display is concave, curving on a 1.8m radius to make the picture feel like it’s Tapped around you. 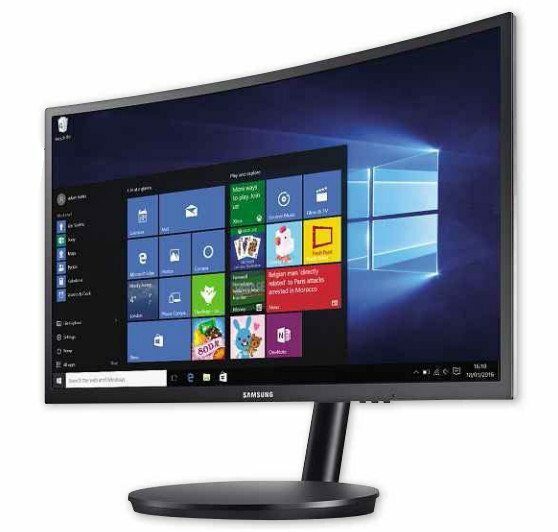 The case accommodates this with a distinctive w’edge shape, and it’s mounted on a big and sturdy two-piece Anglepoise-style arm (see image below). This justifies the extra space it takes up, because you can set the screen at the exact height and angle that suits you. With experts saying that most of us are using screens in positions that harm our neck and back, it’s a feature we shouldn’t take lightly.

And the picture is well worth seeing in comfort. This is one of the first PC monitors to borrow^ ‘quantum dot’ technology from high-end TVs. In the future, screens made entirely of quantum dots could bring higher contrast and purer color. For the moment, though, the principle is used for backlighting of an otherwise conventional LCD panel to give the same advantages, rather like the AMOLED technology in Samsung’s laptops and tablets. It works: our test equipment measured an amazingly low black level, very high brightness and enormous contrast.

Brilliant images and a superb stand – but just too expensive.

What your eyes will tell you is that the image is bold and vibrant when it should be, but also does full justice to subtle gradations. Our test confirmed that it covered almost 100 per cent of the sRGB range with very high accuracy. That’s not quite so impressive now that Apple, for example, fits screens that go w’ell beyond sRGB, but only a few programs can take advantage of that. There’s little to be gained by fiddling any further with the color settings, but it’s easy to do so if you want, thanks to the straightforward menu system, controlled by a joystick behind the bottom edge.

Non-gamers may not be excited by the monitor’s 144MHz refresh rate and one-milisecond response time, but they mean the display looks smooth and stable and objects in motion stay sharp. It all contributes to moving pictures that look more solid and real. If you do like 3D games and have an AMD graphics card, Freesync is supported to keep the monitor locked to the number of frames per second being output, and we found it wrorked perfectly.

Finally, the optional ‘Arena lighting’ feature projects light downward when the screen gets bright, a bit like Philips’ Ambilight, although it’s much weaker here. You’d only notice it when watching videos or playing games in a dark room, but, like the curve, it makes you feel a little more immersed in the experience.

If we were going to splash out on a curved screen, we’d probably pick a bigger one. But this is such an excellent monitor that we hope to see more like it – albeit at lower prices.

We’re not going to recommend it, but this is nothing short of a great screen with features that will hopefully appear in cheaper monitors

It’s not as impressive or adjustable, but this curved 27in monitor adds speakers and is cheaper – though still only Full HD