Review bot-at-large Jonni Bidwell does his damnedest to look past the late 90s-stylings of this project’s website… Read our Robolinux 11 Review.

A nothing if not interesting effort to ease the transition from Windows to Linux. For a fee, you can transfer your existing Windows install to a VM, or set up a clean “stealth” VM for running Windows programs. See also: Linux Mint, Pop!_OS and Ubuntu

RoboLinux is a project that we’ve been meaning to look at for a while. It’s a one-man effort, Ubuntu-based affair, but stands unique among its numerous peers. The project’s website (which may have used WordArt for its logo, which of course is absolutely acceptable) carries the headline “Robolinux runs Windows XP, 7 & 10 Virus Free”. A bold claim indeed, and perhaps one that needs some degree of qualification.

Its main feature is access to a one-click Windows XP or 7 installer, so that users can run 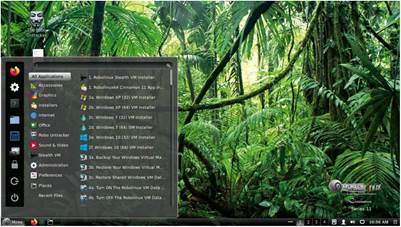 It’s pretty much just Ubuntu 18.04 loaded with stuff that you don’t need and some referral links. Oh, but that’s a lovely jungle pic though.

applications inside a virtual machine (VM). Keen readers will note that Windows XP and 7 are both now EOL (end of life) products, and are susceptible to all kinds of malware, VM or no. Granted, if that VM is sufficiently firewalled (or absolutely isolated from the Internet in the case of XP) the risks can be diminished.

The trouble is, all that one click gets you access to is an invitation to make a donation (at least $25) to the developer (“Robo”) so that he can remote assist you into setting up a VM. We don’t have $25, and nor did we really want to run any Windows tools. So we didn’t test this. It all sounded a bit rough and ready (perhaps that’s unfair, but it’s certainly not a scalable solution). Be that as it may, the rest of the distro had some interesting features so we figured we’d persevere.

It’s based on Ubuntu 18.04 (the release notes cite stability concerns with 20.04) and comes in Cinnamon, MATE and Xfce flavours. Installation requires a ludicrous 25GB, so we deleted a vast tranche of GIFs (farewell noble moieties of amusement) to make room. The 18.04 installer is changed in name alone, and as we’ve come to expect, proceeded without a hitch. The initial install occupied 16GB, and includes popular applications such as SimpleScreenRecorder and VLC. Having VirtualBox pre-installed is handy too, even if you’re not going to make use of the guaranteed virus-free StealthVM hyper tech.

Windows are decorated with the Numix theme, which we like, but for some reason the desktop uses the long- abandoned BlackMATE theme. The worst part about this is the awful use of a serif font in the window list and tooltips. Also, it would have been nice to include a newer version of Cinnamon. It felt odd coming back to this one after our Mint 20 extravaganza.

Besides the paywalled VM option, Robolinux features its own Untracker application. This seems to be little more than a script to change your MAC address on every boot. We can’t be sure because, again, it’s paywalled. There are some poor taste jokes on the donation page about contact tracing, which made us dislike this even more. MAC addresses are used for routing at the link (i.e. Ethernet) level. They’re not required by the IP layer on top of this, and so are stripped from IP packets sooner or later when they hit a router. Sometimes they’re used to generate IPv6 addresses (although this method is falling out of favour), but to suggest they’re used for tracking is largely scaremongering, and to try and get money for a script (which you can do in a Bash one- liner) is rather underhand.

Perhaps we’re being unduly harsh. The paywalled tools were free until last year, Robo is clearly undergoing some financial hardships and we do sympathise with his plight. He offers unlimited free email support or paid for telephone support. Noble, but again, not scalable.

The idea is not bad, but the execution - in particular the conspiratorial anti-MS sentiment which seems to motivate the project - is.