An usual approach to the traditional valve DAC, Ed Selley reckons that PrimaLuna has hit on something special with the Evo 100. Read our PrimaLuna EvoLution 100 Tube Digital AnaLogue Converter Review. 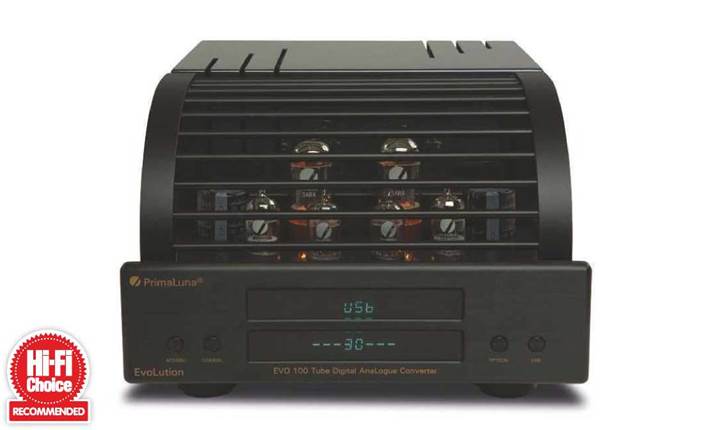 Best known for its extensive range of integrated, pre and power amplifier designs, PrimaLuna has also made a small number of digital sources for some years now. Initially, this was based around CD as a medium, but more recently it has switched to DACs to help digital fans consume music in all its modern forms. The Evo 100 Tube DAC is notionally part of the company’s 100 Series of products, but can be partnered successfully with any amplifier from its extensive lineup.

The category of ‘valve DACs’ is a niche one, but within it there is a great deal of variation from devices that are almost entirely solid state with a solitary tube parked in the output stage all the way though to those that make use of valves for

much of their functionality. Even judged by the standards of the latter, the PrimaLuna is a very unusual device in that a valve is instrumental to the function of the digital section of the DAC – something which by convention is usually solid state.

This takes the form of what PrimaLuna calls the “SuperTubeClock”. Instead of a standard solid-state oscillator as used in the vast majority of digital products, a compact triode valve is used to generate the signal. The oscillator valve itself is mounted on its side on the main board and PrimaLuna says that thanks to its military origins, it’s reliable and should have a long life. The DAC itself is a Burr Brown PCM1792A with SRC4192 upsampler that supports sample rates up to 24-bit/192kHz and DSD128.

Designed as a dual mono device, each channel has a complement of individual 12AX7, 12AU7 and 5AR4 valves. The 5AR4 is by far the largest and acts as the rectification for the power supply. Designed to the same principles as found in its amplifiers, the power supply combines low noise toroids with valve rectifiers and what it calls its “AC Offset Killer” – to reduce background noise. Point-to-point wiring and high-quality components are used throughout.

As well as the USB-B port, there are optical, coaxial and AES digital inputs and a stereo analogue RCA output. Unlike some rivals (see How It Compares), it is strictly line level with no level adjustment and the DAC’s sampling rate offers support for the vast majority of music files available.

Aesthetically it might be a little odd, but it is nonetheless likeable. The two separate displays for input and incoming sample rate aren’t the most elegant, but the result is easy enough to follow. The chassis is also quite deep, which you may need to take into account if space on you hi-fi rack is tight. It is very well made, though, and everything from the rear panel connections through to the little metal remote control feels carefully assembled and well thought out.

Connecting it to a system comprising a Cambridge Audio Edge A and the Kudos Titan 505 from the active system (p42) and taking a signal from an SOtM SMS-200 Neo (HFC 449), the PrimaLuna has a key behavioural trait in common with the Evo 200 integrated amp we looked at in HFC 457. From the first few bars of the 16/44.1 rip of Fink’s Resurgam, it’s clear that this is an impressive digital product that happens to use valves rather than the other way around.

This is most elegantly shown in the evenness of the frequency response. Resurgam is a long, slow burning effort that rises from little more than a bass and drum. The drumbeats are clear, well defined and weighty. As the vocals begin, the PrimaLuna does a fine job of locking them to the centre stage, giving them the space they need without affecting their relationship to the rest of the instruments. The vocals are rich, detailed and tonally believable but there isn’t any feeling of over emphasis to them.

This isn’t something that only happens with gentle acoustic material. Switching to Axolotl by The Veils, sees the PrimaLuna get stuck into this monster of a song with considerable gusto. The shuffling time signature and potent bass are beautifully reproduced and underpin upper registers that come across as utterly convincing. More importantly, 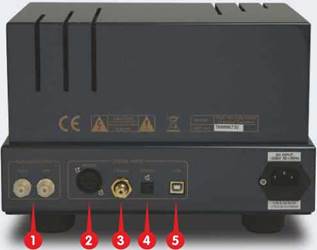 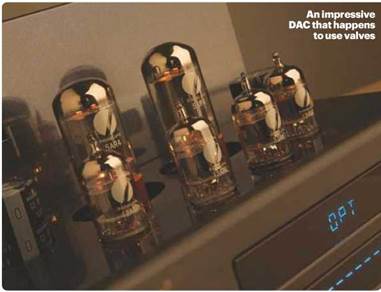 there is no feeling of the top end being clipped or smoothed off. This is an angry, jagged piece of music and the Evo presents it as such. It’s never unlistenable, but it achieves this without feeling sanitised.

It isn’t perfect, however. Really deep electronic bass notes, such as those that underpin the 24/96 version of Aurora’s Gentle Earthquakes don’t have the same laser-edged definition that my resident (and more costly) Chord Hugo M Scaler and TT 2 DAC can produce. There’s certainly no shortage of bass, but the last ounce of definition and control isn’t there.

If it is beginning to sound like the Evo is a rather more elaborate and complex way of making a completely normal DAC, that isn’t the case. If you give it the 24/48 Qobuz stream of Emily King’s Sides, the way that it deals with the joyous Can’t Hold Me is something beyond ‘ordinary’ digital. It’s not a reproduction, rather a performance and it sounds utterly and intoxicatingly real, helped in no small part by the low noise floor that PrimaLuna has worked so hard to create. Without doing anything to blunt the dynamics of what you are listening to, it delivers a level of emotional engagement to the music that is hard not to like.

This then, is not a ‘normal’ valve DAC. Counter intuitively, by creating a product that adheres to the same ‘all-in’ principles as its amplifiers, PrimaLuna has created a product that goes toe to toe with more conventional rivals but can also reach into its bag of tricks to deliver a level of soul that is beyond all but the most exceptionally accomplished solid-state rivals. It isn’t quite a universal solution, but the Evo 100 will delight a great many listeners and for a good chunk of them, absolutely nothing else will do

Costing just over £ more than Chord Electronics Hugo 2 (HFC 428), the Evo lacks the preamp functionality of the Chord. It has a greater presence and tangibility from the lower midrange upwards that helps acoustic material in particular sound more lifelike. The Hugo 2 hits back with better bass and three dimensionality with more complex material. It’s a testament to just how good the engineering of the PrimaLuna is that it can compete with solid-state rivals in areas where they are often superior.