Bluetooth has been part of the audio landscape for over a decade now, but it would be fair to say that for many the short-range wireless connectivity tech is something of a convenience feature; indisputably useful, but not necessarily regarded as worthy of a place in a serious hi-fi setup for critical listening. Part of this perception is due to the performance it offered in the early days. The default SBC codec introduced many to the idea of wireless connectivity, but was nothing to get excited about in audio terms, and this remains the feeling of many audiophiles to this day.

Since then, however, Bluetooth has continued to evolve and grow in capability. As one of the few examples of a genuinely open standard that can be developed by a number of different companies at once, there has been a wide selection of additional codecs added to the standard that boost the available bandwidth and increase performance. The catch with this is that finding a device that supports the type of enhanced Bluetooth that your device is equipped with is not always completely straightforward, but digital audio specialist iFi Audio has created a DAC with a view to solving this.

As one of the latest introductions to its digital-to-analogue converter range, the Zen Blue is a dedicated Bluetooth DAC. With no other input connectivity, it initially looks a little parsimonious but there is a matching Zen DAC also priced to cover USB connectivity needs.

Built around a Qualcomm 5100 series chip running a Bluetooth 5.0 implementation, the Zen Blue is the most comprehensive Bluetooth DAC I’ve ever encountered and partnered to a Bluetooth 5.0 transmitter, it is considerably more energy efficient than older Bluetooth versions. As per the minimum requirement of Bluetooth, the Zen Blue supports the SBC codec but then goes on to cover off every base imaginable. Apple devices can use AAC while Android users get aptX and aptX HD. The Zen Blue goes a stage further and adds the LDAC codec developed by Sony along with HWA (also known as LHDC) by Huawei that bring higher resolution streaming using codecs supported by Bluetooth; pair a device with the Zen Blue and it will work out the best

connection standard available to it and stream at the highest quality.

Meanwhile an ESS Sabre chipset ensures that jitter – an unavoidable part of Bluetooth connectivity, even via a bespoke implementation such as this – is controlled before decoding takes place. This outputs via a stage employing custom op amps that the company uses in its more expensive products to a choice of stereo RCAs or a balanced 4.4mm jack plug connection. Alternatively, you can flick a switch on the back and turn the Zen Blue into a transport that can be connected via optical or coaxial to any DAC that takes your fancy.

The company has something of a reputation for making distinctive- looking components, and the Zen Blue stays true to eye-catching form with an enveloping metal chassis. It feels well made and worth the asking price. The controls are fairly limited with just a pairing button and a connection status light. A neat touch is the use of the iFi logo to denote the Bluetooth standard that’s connected and tells you at a glance what the DAC is doing. It works very well and keeps the aesthetics simple. The large stubby aerial at the back might not be the prettiest, but it does at least ensure a stable connection.

The Zen Blue is firstly tested via its RCA stereo line output into a Naim Nait XS 3 integrated amplifier (HFC 459) and Neat Ministra loudspeaker. Initially testing via a latest-generation iPad Pro, which offers support for AAC, the iFi Audio shows that it’s clearly a talented DAC. AAC is decisively better than the standard SBC codec, but still effectively equivalent to 320kbps MP3. This is reflected in the performance on offer.

The utterly lovely End Theme by Zero 7 sounds sweet and tonally convincing, but lacks the weight and richness to the strings that a lossless version can bring to the party. This is comfortably the best that I’ve heard an AAC Bluetooth stream sound, but this is more a reminder that Apple would really rather you used AirPlay.

Switching to aptX via an Onkyo DP-X1 digital audio player is a significant step change in showing what the iFi can really do and the jump in three dimensionality, scale and tonal richness is immediately noticeable. This is the point that Bluetooth steps beyond simple convenience feature and becomes something more significant. Again, it’s right at the pointy end of what you can expect from an aptX source and although the ESS DAC’s presentation is extremely detailed, it’s perhaps not the sweetest sounding device going.

The connection is stable throughout and free from any background noise

The Zen Blue does have more to give, however. With Shanling’s diminutive LDAC-capable M0 digital audio player (HFC 439) and playing a 44.1kHz rip of Air’s Alone In Kyoto, it really shows what it can do. There is an effortlessness to the presentation that is not something I’ve experienced before with Bluetooth streams, even with more expensive DACs that support aptX codecs and my perception is that the performance is indistinguishable from connecting the Shanling to a USB DAC and playing the file directly. 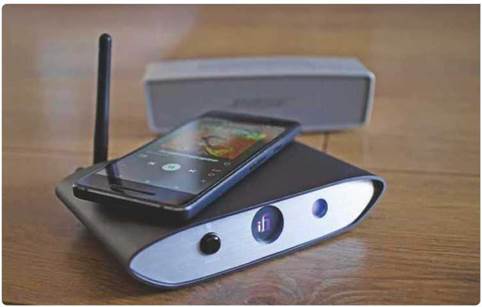 via another DAC I know well. In this case I use an Auralic Altair G1 (HFC 455), which has a coaxial input ideal for the task as the Zen Blue takes on the characteristics of the externally connected DAC. This may not be an obvious application for the Zen Blue – particularly as the Altair G1 is aptX-capable itself – but the underlying qualities of it as a piece of Bluetooth hardware do throw even the well sorted Auralic into sharp relief.

Throughout my time with the Zen Blue, the connection is unconditionally stable and completely free from background noise or interference. This might sound fairly obvious, but it hasn’t always been my experience even with costlier rivals.

The fact that iFi Audio has tied reliability, flexibility and outright performance together in a single package is very impressive. That it’s also done all of this for £ is nothing short of outstanding. Feed it the right Bluetooth source (and by this I’m suggesting aptX or better) and the Zen Blue takes what many still see as nothing more than a convenience feature and delivers something that genuinely approaches hi-fi sound. The scope for it to be bolted to even better quality DACs is just the icing on the cake, making it not only a genuine bargain but quite possibly the best Bluetooth device we’ve ever encountered.

Introduced in 2013, Arcam’s rBlink (HFC 373) is a Bluetooth DAC with analogue stereo RCA outputs plus coaxial digital out. It offers AAC support but is without aptX HD and the more specialist codecs supported by iFi Audio’s Zen Blue. Additionally, the Zen offers an optical output, shows useful connectivity status and is better value.