Most of this Labs test has been dedicated to 4K screens with the same 16:9 widescreen aspect ratio as 1080p displays, but there’s an alternative option, in the form of 21:9 ultra-wide curved displays, such as the 34-inch Philips BDM3490UC. With a resolution of 3,440 x 1,440, the overall pixel count is much lower than that of a 4K panel. It’s precisely 880 pixels wider than a 2,560 x 1,440 screen, with 440 pixels added to each side. The Philips is also curved at the edges, bringing the sides slightly more in line with your peripheral vision. 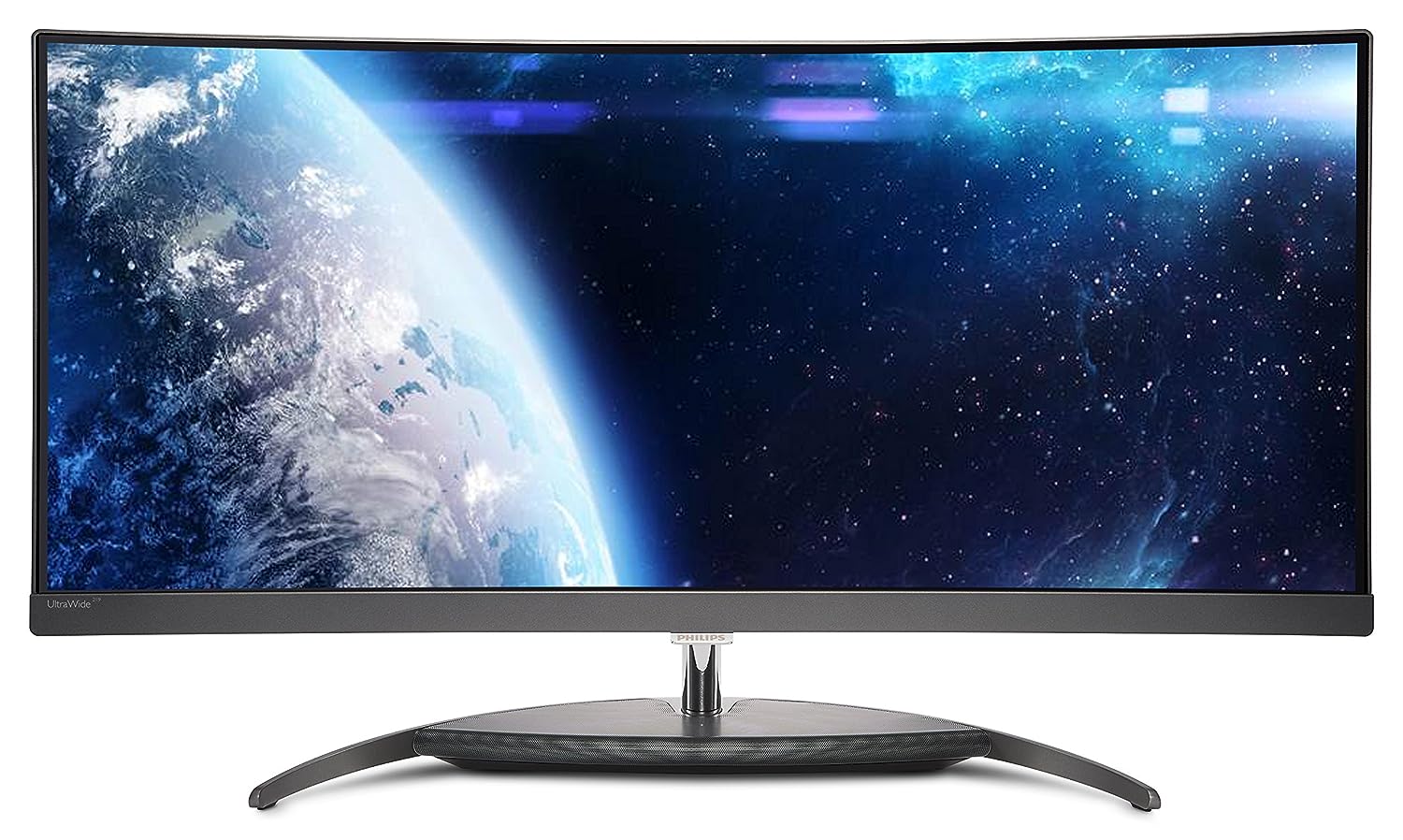 Curved 21:9 displays provide a more cinematic view of movies, particularly with modern titles that have been filmed in this aspect ratio. They also provide more width than a standard 2,560 x 1,440 16:19 screen, enabling you to have few applications comfortably spaced on-screen at the same time. It’s like having a multi-monitor setup, but with a single large screen rather than two. The screen is wide enough two have two web pages next to each other, and still look absolutely normal. It’s also great for immersive gaming, occupying nearly all of your peripheral vision.
The Philips has an IPS panel with 10-bit color processing, derived from 8 bits with a dithering technique. Meanwhile, the display’s curvature is described as 3800R, referring to the complete radius (in millimetres) of a circle formed by ultra-curved monitors if they were placed next to each other.
The overall design is impeccable. Philips has opted for a dark grey front and glossy white plastic casing at the rear, which looks great and feels lovely to touch, with a solid metal crescent-shaped stand, which has a very wide plastic base to support the weight of the display.
There’s an overall theme of white, with a white external power supply and even white cabling supplied in the box. The only negative design point is the stand’s lack of flexibility, there’s no height adjustment or rotation, although it will tilt forwards and backwards.
The OSD is controlled with a four-way joystick underneath the display, which is by far our favorite control system for menu systems on monitors. A quick push in any direction brings up shortcuts, with a push to the right leading to a main menu offering the rest of the settings.
In the OSD menu system, you’ll find a similar number of options and settings as with the 4K Philips BDM3275UP, including the same wide range of presets for both white points (Kelvin values) and color modes; there’s also a PIP mode.
As with 4K, for 60Hz use on a 3,440 x 1,440 display, you need to use either the DisplayPort 1.2 or HDMI 2 inputs. There’s an additional pair of HDMI 1.4 inputs as well, along with a four-port USB hub. By default, you’ll need to enable either DisplayPort 1.2 or HDMI 2 in the menus though. The display from an HDMI device also looks stretched unless you force the picture mode to 16:9 in the menu.
Unlike most monitor speakers, the Philips’ two 7W speakers also deserve a mention, as they sound surprisingly good, and their support for DTS audio enables virtual surround sound too.
Subjectively, the picture appears bright, with great contrast, and this perception was backed up by good test results, showing 342cd/m² brightness and 750:1 contrast. Out-of-the-box color accuracy shows a delta E under 1, which is a great result. Meanwhile, the display managed sRGB and Adobe coverage of 100 per cent and 79 percent respectively, which is typical of most IPS displays. Average deviation across the panel is below 9 per cent as well.
This ultra-wide 34in screen is huge, but it has an excellent design and a great picture. If you have room for it then it’s a solid alternative to a traditional 16:9 4K screen, or a dual-display setup.