Dell’s 27in Dell UP2715K offers a compelling alternative to the 4K displays on test this month, with a higher resolution and even smaller pixels. The standard 4K resolution of 3,840 x 2,160 is exactly four times 1,920 x 1,080, and if you similarly multiply 2,560 x 1,440, you end up with the Dell’s 5,120 x 2,880, or 5K, resolution.
There’s a small problem though. Driving this number of pixels at 60Hz requires more bandwidth than a single DisplayPort 1.2 cable can handle, so you need to connect two cables to the UP2715K from your graphics card. The DisplayPort 1.3 standard will overcome this limitation, but no graphics card supports it yet. You can also use the Dell UP2715K as a 4K display with a single cable connected to the mini-DisplayPort input. 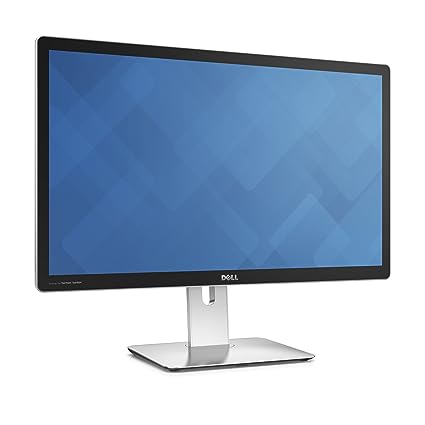 HDMI has been omitted completely. The UP2715K is specifically aimed at graphic designers and artists, so it’s assumed you’ll be using a high-end PC, not a PlayStation. That hasn’t prevented Dell from going all out with the speakers, though, including two 16W cones from Harman Kardon, which sound notably better than the speakers on most displays.

The 8ms response time is another reason to disassociate the UP2715K from gaming, being slightly slower than other IPS 4K screens, which are down to 4ms or 5ms, while TN screens are even quicker.

It has a boxy, dark grey design, with a metal stand that supports the full range of pivot, tilt, rotate and height adjustments. The screen is also coated in glass, for a slightly reflective image. There are loads of USB 3 ports as well, and the OSD is controlled with physical buttons on the right edge.

With 10-bit color processing and a 12-bit look-up table, the Dell’s IPS panel is capable of great color reproduction.

It also carries a significantly higher price than many 4K screens, but the test results tell you why. The sRGB result of 100 per cent can now be managed by most good IPS monitors, but the Adobe RGB result of 99 per cent is particularly impressive, being better than any of the gaming-focused 4K screens on test.

Likewise, the maximum brightness of 342cd/m², and the 720:1 contrast ratio, are impressive figures, although the brightness distribution average of 5.95 per cent, while a good result, isn’t the best result we recorded. Its uncalibrated delta E under 2 shows reasonable accuracy as well, and this result dropped to 1 after calibration. Also worthy of note is the great gamma result of exactly 2.2, with no deviation on either side.

The image really blows you away when you see it though. It sounds like hyperbole, but the amazing on-screen colours inject new life into content. Greens show up that you never noticed before and reds are incredibly bright. Combined with the very high resolution, the result is the best image quality we’ve seen.

On the downside, the 75.4W power consumption is very high, and Windows can still randomly switch to 100 per cent scaling sometimes, at which point text becomes unreadable on this 5K monitor. Gaming at this resolution is also even more demanding than at 4K, requiring a serious multi-GPU setup.

The Dell UP2715K is a cut above the rest, but at a price that will put off many people. For the same money, you could buy two 4K monitors, although neither would offer the fantastically rich colors and sharpness of the Dell. If sharpness and image quality are your top priorities, and you have the money, the UP2715K is an excellent monitor.

It’s pricey, but its image quality is second to none, with a sharp picture and great colour reproduction.

DELL UltraSharp UP2715K
out of stock