A joint effort of two popular projects, this elegant distribution is steadily gaining in popularity

CPU i686 Intel or AMD processor

Graphics Video adaptor and monitor with 1,024×768 or higher resolution

The MX Linux project is a joint effort between the antiX and MEPIS communities, and the distribution they produce uses some modified components from both projects. MX Linux is also popular for its stance of sticking with sysvinit instead of switching over to systemd. 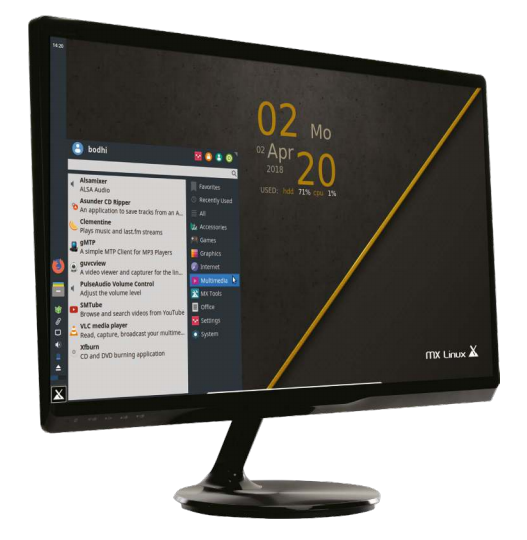 Above Being desktop-orientated, MX Linux includes a bunch of non-free software that you can list with the vrms command

The distribution uses a customised Xfce for a dapper-looking desktop that performs adequately even on older hardware. MX Linux ships as a Live environment and uses a custom installer verbose enough to explain what’s going on with the various steps. The installer also uses reasonable defaults that’ll help first-timers sail through the installation. The partitioning screen offers the option to partition the disk automatically if you want MX Linux to take over the entire disk: dual-booters and advanced users will have to use Gparted to manually partition the disk. Advanced users will appreciate the option to control the services that start during boot, while new users can press ahead with the defaults. If you’ve made any modifications to the desktop in the Live environment, you can ask the installer to carry these over to the installation, which is a nice touch.

The desktop boots to a welcome screen that contains useful links to common tweaks and the distribution’s set of custom tools. The installation also includes a detailed 172-page user’s manual and you can access other avenues of help and support. 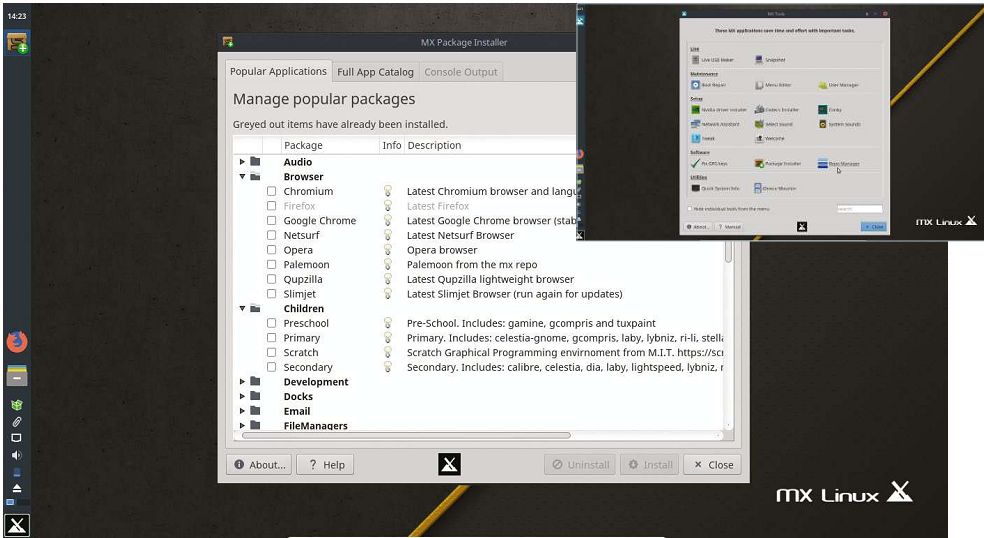 Advanced users will appreciate the option to control the services that start during boot, while new users can press ahead with the defaults

including forums and videos, on the project’s website. The clean, iconless desktop displays basic system information via an attractive Conky display. Also by default, the Xfce panel is pinned to the left side of the screen and uses the Whisker menu.

MX Linux’s default collection of apps doesn’t disappoint, as it includes everything to fulfill the requirements of a typical desktop user. In addition to a host of Xfce apps and utilities, there’s Firefox, Thunderbird, LibreOffice, GIMP, VLC, luckyBackup, and more. MX is built on the current Debian Stable release but updates a lot of apps and back-ports newer versions from Debian Testing. The only downside of this arrangement is that you’ll have to do a fresh install of MX Linux when the distribution switches to a new Debian Stable release.

An icon in the status bar announces available updates: you can click it to open the update utility, which works in two modes. The default is the full upgrade mode, which is the equivalent of dist- upgrade and will update packages and resolve dependencies even if its requires adding or removing new packages. There’s also a basic upgrade mode that will only install available updates. In the latest 17.1 release, the update utility has new options to enable unattended installations using either of these mechanisms.

The update utility is part of the distribution’s set of custom tools designed to help users manage their installation. These are housed under the MX Tools dashboard and cover a wide range of functionality, including a boot-repair tool, a codecs downloader, a utility to manipulate Conky, a Live USB creator, and a snapshot tool for making bootable ISO images of the working installation.

One of the tools you’ll be using quite often is the MX Package Installer, which has undergone a major rewrite in the 17.1 release. The installer includes popular applications from the Debian Stable repositories along with packages from Debian Testing. It also lists curated packages that aren’t in either repositories but which have been pulled from the official developers’ websites or other repositories, and have been configured to work seamlessly with MX Linux.

The custom package manager with its list of curated packages and custom MX Tools.

The hassle of backing up data and a fresh install whenever MX switches to a new Debian Stable.

MX Linux is a wonderfully built distribution that scores well for looks and performance. The highlight is its custom tools that make regular admin tasks a breeze. The package manager, and the remastering and snapshot tools also deserve a mention.

MX Linux is a wonderfully built distribution that scores well for looks and performance. The highlight is its custom tools that make regular admin tasks a breeze. The package manager, and the remastering and snapshot tools also deserve a mention.