The Optix MAG272CQR aims to provide a great balance for all sorts of gaming, from single-player titles to esports. The 27in diagonal and 2,560 x 1,440 resolution are a good start, resulting in a pixel density of 109ppi. That’s crisp and immersive without being too high for mainstream graphics cards to handle. 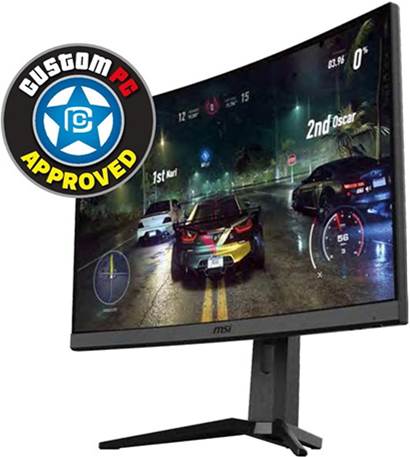 The MSI’s VA panel has a 165Hz refresh rate, and like the IPS monitors in the Labs (see p52), its adaptive sync implementation works with both AMD FreeSync and Nvidia G-Sync, eliminating tearing artefacts on both company’s GPUs. That refresh rate is high enough to ensure smooth, responsive gaming in high-speed esports, and the MSI’s quoted 1ms response time is also excellent.

The MSI’s 1500R radius is tighter than most curved displays, which are configured at 1800R, but that makes sense, because it helps immersion on smaller displays. Meanwhile, the DisplayPort and HDMI connections are joined by USB Type-C, which can be used as a DisplayPort input or device charging.

The Optix’s stand also has height adjustment and can be tilted, although it has no swivel options. It looks good, with slim bezels and narrow legs, and it’s sturdy too. There’s a headphone hook and a slate of RGB LEDs at the rear. Meanwhile, the on-screen display menu is fast and straightforward to navigate, with key information always displayed. It’s only navigated with one joystick, but it works – every key option is accessible.

The MSI also has good core image quality. Its default brightness measurement of 229cd/m2 is decent, and its black point of 0.09cd/m2 is stunning – deeper than most gaming displays, and low enough to give huge depth to shadowed and darker areas. The resulting contrast ratio of 2,544:1 is superb: better than any IPS display and high enough to deliver huge punch and vibrancy. It doesn’t match MSI’s claimed 3,000:1 figure, but it’s still good.

The delta E of 2.07 is also decent, and the colour temperature of 5.989K is reasonable. That latter figure is a little warm, which leaves lighter areas with a slight red pall, but it’s not hugely noticeable in games. The MSI also displayed an impressive 99.4 per cent of the sRGB colour gamut.

The maximum brightness of 293cd/m2 is also reasonable, and contrast and colour accuracy were maintained with the backlight increased. The MSI is uniform too: its backlight

Extras 100 x 100mm VESA mount, 2-port USB 2 hub only weakened by 11 per cent in the corners, which is a good result for a curved gaming panel.

The Optix isn’t infallible, of course. Its genre modes all ruin the delta E, and the MSI isn’t bright enough to handle HDR, despite the firm’s claims that it’s ‘HDR Ready’. We also noticed a tiny bit of ghosting when using aggressive overdrive settings beyond the maximum 165Hz refresh rate, likely due to its reliance on VA technology rather than IPS or TN. Most people won’t be bothered by this, but it’s a minor complaint for competitive gamers who might be looking for the clearest response at high frame rates. The MSI has no speakers either, and its USB ports are awkwardly installed at the rear.

The MAG272CQR’s resolution, refresh rate, size and curve make it an immersive, crisp option for gaming – from smooth single-player titles to fast- paced esports. It has great core image quality, top-notch contrast, deep black levels and reasonable colour accuracy. It can’t handle true HDR, but the MSI is well-balanced and cheaper than most other displays with this sort of specification.

A well-balanced specification joined by great core image quality and a fair price.