Lubuntu 19.04 was released on 18 April, 2019 and is worth checking out, as it offers some substantial refinements over Lubuntu 18.10. Lubuntu 19.04 is a standard release and so it includes support for nine months, until January 2020. Read our Lubuntu 19.04 Review.

The code name for this release, Disco Dingo, sounds like it should have a theme song written by the Bee Gees and played on the didgeridoo! Unlike previous release names, Ubuntu founder, Mark Shuttleworth, did not make one of his usual alliterative blog posts explaining this name choice.

Lubuntu 19.04 is the 19th release of this distro and the second Lubuntu release to feature the new LXQt desktop, which replaced LXDE starting with 18.10. LXQt had been planned as the new desktop since Lubuntu 14.10, so it has been a long wait for its release. As implemented in 18.10, it had some rough edges, but these have all been fixed in 19.04 and the new desktop has now hit its stride.

The LXQt desktop took a long time coming, four years after being initially planned. During those years, the old LXDE desktop went into “maintenance” as the developers worked on the new desktop. This had the curious 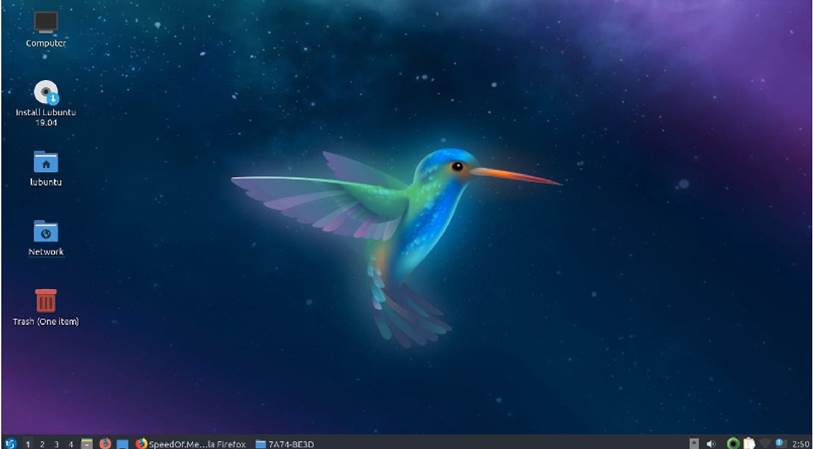 effect of leaving Lubuntu users with a really stable and predictable LXDE experience where everything worked and nothing was changed from release to release, including two very solid LTS releases. It left the users with high standards for the new desktop. Beta-level software wasn’t going to cut it.

The first LXQt release, Lubuntu 18.10 was not a strong release. It had some bugs and other issues and was a bit rough. There were track-pad configuration problems, lack of spell checking in LibreOffice, and networking issues with both WiFi and Ethernet. The networking issue also affected other distros beyond Lubuntu and was seen on Xubuntu as well. It may have affected only specific hardware, however. At least one reviewer noted it and some users had similar complaints on the Ubuntu Forums.

Lubuntu 19.04 is mostly an iterative development of LXQt, working towards the First Lubuntu LXQt Long Term Support (LTS) version which will be 20.04 LTS, due out in April 2020. The new LXQt desktop was introduced right after the last LTS release to give three “standard” releases to tune it before the First LTS version, a wise approach to introducing something this new. Many Lubuntu users will continue using 18.04 LTS, with its older LXDE desktop, though, until 20.04 LTS comes out with the hopefully perfected LXQt desktop.

I initially tested Lubuntu 19.04 in a series of live DVD sessions before installing it on my System76 laptop. Total installation time was 15 minutes, which is a couple of minutes Faster than previous Lubuntu LXDE installations. The new Calamares installer works well and is Fairly easy to Follow, even though it is somewhat different From the old Ubiquity installer.

In testing after a Fresh boot, the idle RAM is 376 MB, compared to 258 MB For Lubuntu 18.04 LTS. LXQt is not as lightweight as LXDE was. The boot up time on my hardware is 1:36, which is slower than any previous version of Lubuntu. In comparison, Lubuntu 18.4 LTS booted up in 51 seconds.

The First thing of note when booting up Lubuntu 19.04 is the new wallpaper, or at least semi-new wallpaper. 19.04 Features the same star Field wallpaper seen in 18.4 LTS and 18.10, but with a striking new hummingbird added. The hummingbird is the emblem of LXQt, oF course, and thus shows up in many places, including on the menu button. While the new wallpaper highlights the introduction of something new, it is odd that it was not introduced with 18.10, when LXQt was First introduced. Likely new artwork wasn’t at the top of the developers’ list.

Perhaps the First thing to do after an installation is to install any software updates that have accrued since the release. Lubuntu has moved away From the Software Updater (package name: update- manager), which provides automatic checking, notification and then manual installation of updates For most Ubuntu Flavors. Instead Lubuntu now uses Muon, which offers a lot more user control of updates, although no automatic notifications. To get updates, open Muon, click “check For updates”, and then “apply changes”. It is a bit geeky, but I like Muon a lot, as it is easier to see which updates are recommended, but the lack of notifications may be an issue For less technical users who don’t run it and check For updates often.

So what is new in 19.04 besides the wallpaper? The main change over 18.10 is a new version of LXQt, 0.14.1, based upon the Qt toolkit, version 5.12.2, which includes many refinements and Fixes. There are lots of small improvements throughout, that make Lubuntu 19.04 much more Functional than 18.10.

The one exception on the Qt applications list is FireFox, the default web browser, which remains a GTK-based application. The Lubuntu developers had hoped to move to the Qt-based Falkon browser in Lubuntu 18.10. It has excellent potential, but it wasn’t totally ready For daily use yet.

Some of the applications included with Lubuntu 19.04 are:

•     indicates the same application version as used in Lubuntu 18.10.

Oddly, Lubuntu no longer comes with a webcam application, although Guvcview and Cheese are available in the repositories. Not having webcam software installed by default may make some users Feel more secure about the risk of unauthorized camera access, although this doesn’t seem to have been an issue with Linux in the past.

Lubuntu 19.04 is the First release that does not have a 32-bit version For i386 architecture. The last 32-bit computers produced are 13 years old now and today they really don’t have the RAM and CPU power to run a modern operating system. Lubuntu will continue to offer 18.04 LTS For 32-bit until its end of life in April 2021. Ubuntu itself dropped 32-bit support with the 17.10 release, and Xubuntu also dropped 32-bit with 19.04.

The new configuration system is quite different From LXDE, but works well, once you Find out

where everything is located. Configuration is Found on the main menu at Preferences > LXQt settings.

All the Frustrations and other problems I Found in Lubuntu 18.10 have been Fixed, and the result is a very smooth experience, where everything “just works”. Laptop touchpads can now be configured to work in several different ways. LibreOffice is included by default, in its Qt interface version, and this time the spell checking works out of the box! The previous internet connectivity problems seen in 18.10 have been Fixed as well.

Configuring is easy and very Flexible, with new themes, infinite colors, and good configuration interfaces. It is actually Fun personalizing the new desktop. I am not a Fan of dark themes, and Lubuntu’s LXQt desktop comes with a default black “Lubuntu Arc” panel (task bar) and window theme, but it is quick and easy to change that. Even the panel can be positioned at the top, right, or left side of the screen, if you don’t like the default bottom position.

For users moving From Lubuntu LXDE, the LXQt desktop will take a bit of adapting, with the new suite of Qt applications and new settings. That said, Lubuntu still works the same basic way, running everything From a single menu that will seem very Familiar to LXDE users. It retains LXDE’s simplicity and elegance, with a more updated, modern look.

Lubuntu remains a good choice For Windows refugees, too, as its task bar, menu system and ease of use enables an easy transition. It just won’t run your Favorite malware and doesn’t produce BSODs.

It is worth noting that starting with Lubuntu 18.10, the developers no longer make recommendations For minimum system requirements, although it needs a bare minimum of 500 MB of RAM for the installation process. In my experience, any 64- bit SATA hardware computer with at least dual-core processor and 2 GB of RAM should be sufficient. More is always better, of course.

Installing Lubuntu on Other Flavors

While available as a separate installation, Lubuntu can also be installed on top of any other ‘buntu Flavor, as an alternative desktop with:

or for a minimal installation: sudo apt install lubuntu-core

and then chosen at log-in.

Lubuntu 18.10 wasn’t ready For prime time, but 19.04 is. LXQt looks Fresh, and new, and everything works right From the installation; it even runs Fine From a DVD live session. I didn’t Find anything that needs Fixing in 19.04. IF not For the nine month support period For this regular release, it could have been a long term support release, at least For the quality of the user experience and the lack of bugs.