Lenovo Y27g Review – The curved, 27-inch Lenovo Y27g is a high-end entry into the world of gaming monitors. 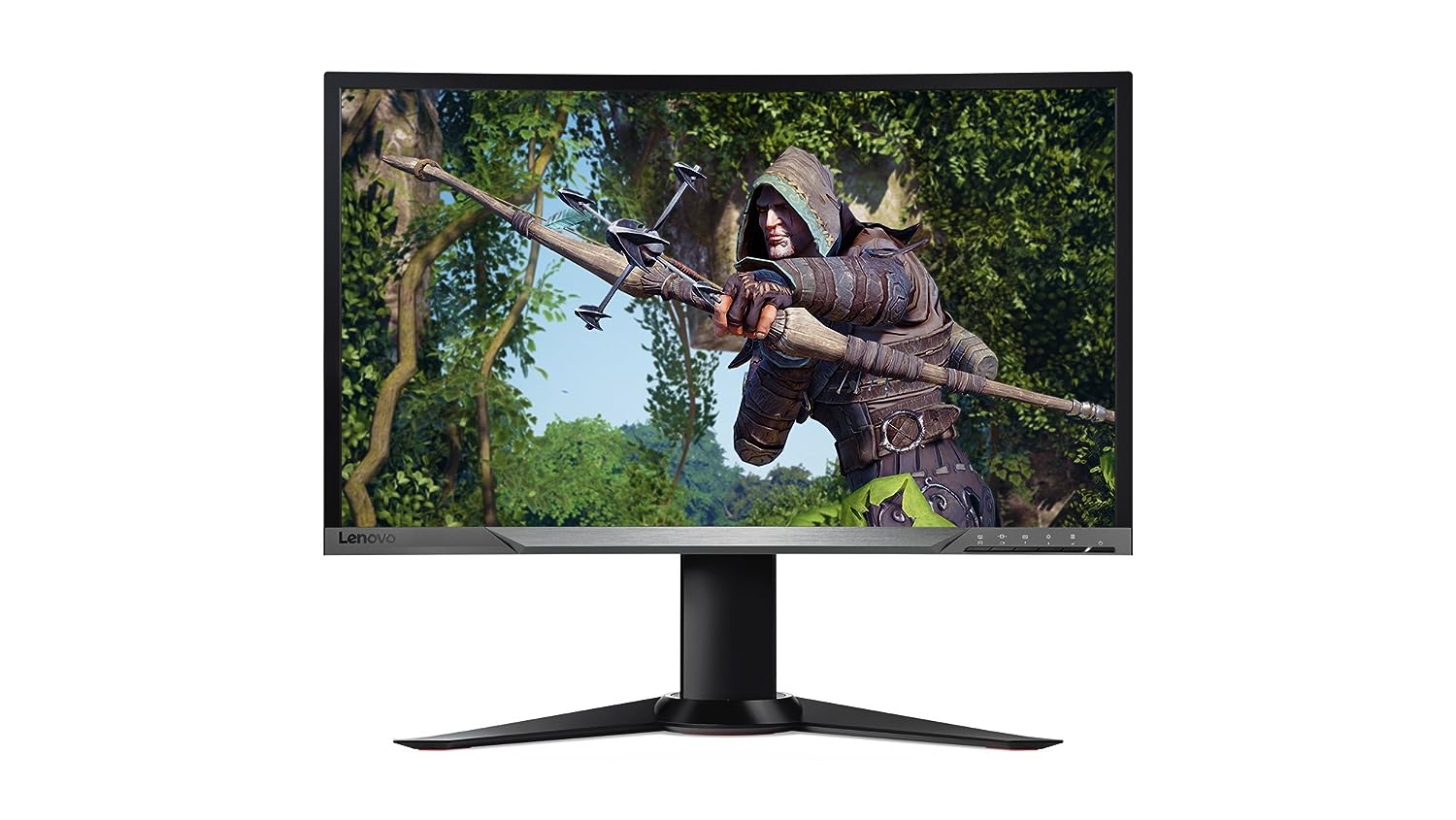 The Y27 series makes good on gamer’s desires with a 144Hz refresh rate, frame rate smoothing technology and a big, angular design that cuts sharp lines. If you really want to go wild, Lenovo even offers a version with Razer’s Chroma lighting tech.

The Lenovo Y27 series is available with either NVIDIA G-Sync or AMD FreeSync anti screen-tearing technology and lots of inputs. It’s a worthy gaming monitor, but technical shortcomings keep it from reaching its full potential.
If you opt for AMD graphics, the FreeSync-equipped Y27f. The NVIDIA G-Sync enabled Y27g, reviewed here, carries an MSRP, and the Chroma-enabled Y27g RE.

Other than the anti screentearing tech and 144Hz refresh rate, the rest of the Y27g’s specs aren’t nearly as exciting. It’s rated for a 3,000:1 contrast ratio, response rate of 4ms, and max resolution is a standard 1920×1080 for Full HD gaming. For the money, those specs should be better. At the very least, a 1440p option would help justify the price.

The Y27g follows the same design cues as the rest of Lenovo’s gaming line, such as the IdeaCentre Y900 desktop computer. Sharp angles with deep red highlights are the name of the design game here. The boomerang-shaped base shoots outward, keeping the monitor stable and allowing it to swivel.

Hash marks etched along the circumference of the stand, as well as the tilting hinge, give it the look of a precision instrument. Turning the Y27g is practically effortless and it just as easy to adjust the height, as well. The monitor can move up and down with a feather touch, and once in place, it stays in place.

The monitor’s tilt adjustment isn’t so straightforward, requiring a firm grip on the base. It’s not a difficult adjustment to make, but the Y27g feels like it might tip over when tilting it back.

Fortunately, the mechanical pieces involved in the swivel, height, and tilt adjustments operate smoothly and easily, while maintaining a reassuring heft. All the adjustments are generous, too.

Swivel goes 30 degrees in either direction, while you can tilt the monitor from -5 degrees to 30 degrees. Height adjustment offers around 10cm to stretch.

There aren’t any speakers in the Y27g, which is a weird omission for a monitor of this calibre and price point. Even though most monitor speakers sound like glorified iPhone speakers, it’s good to at least have the option to use them if you wish.

Lenovo almost makes up for the lack of built-in speakers with a pair of USB ports and a 3.5mm headset socket on the left side. Further sweetening the deal is a fold-out hanger for storing your headset.

When not in use, this folds up and disappears from view. It’s a neat touch. And since one of the side USB ports is always-on, this is the perfect place to hang a wireless headset and charge it in one place.

There are two more USB ports on the back of the Y27g, grouped alongside the HDMI, DisplayPort, and power ports.

The USB ports on the back aren’t easy to get to, even with the monitor turned completely to its side. All the ports face down, rather than out, which saves on room, but given that the Y27g is such a beast of a monitor anyway, it’s more annoying than it is space-saving.

The Lenovo Y27g is supplied with almost everything you need to get the monitor connected and up and running, including DisplayPort, USB and power cables. Plus, Lenovo’s Artery software. Artery enables you make adjustments to the monitor without needing to navigate Window’s Display and Appearance options. Settings such as refresh rate and resolution can also be changed quickly and painlessly with the Artery software.

Usability Not so painless are the on screen menus. The buttons are frontfacing, and labelled, which is helpful, but the menu structure is labyrinthine in nature. We found ourselves accidentally pressing the wrong buttons and undoing display changes, or entering the wrong sub-menus, or going back when we meant to go forward.

Shortcuts assigned to the buttons, such as accessing the Y27g’s gaming presets with one button should be helpful.

Unfortunately, trying to use any of these presets drops you back into Lenovo’s messy menu system.

Instead of accessing the sub-menu, the button would work better if it cycled through the presets.

Not that the presets are great.

However, we found the best picture came from turning the presets off. The FPS1 preset, for example, makes everything too blue; while the FPS2 preset makes everything too red. Worse, the Racing preset turns overdrive to its highest setting, and that’s where the monitor runs into big problems.

There are three overdrive options in the menu: Off, Normal, and Extreme. Both Normal and Extreme introduce unacceptable levels of ghosting. Playing Dirt Rally, the fans on the sides of the road smeared the screen with a glowing ghost.

Everything else looked doubled, like watching a 3D movie without 3D glasses. It wasn’t just a fast game like Dirt Rally, either. Walking around in Hitman brought out the same awful ghosting. The best option when playing anything is to turn the overdrive off completely.

G-Sync and 144Hz makes for some really smooth gaming. It’s easy to overlook the shortcomings of a monitor when games flow like waves on the sea. Getting the monitor adjusted in the on-screen display is cumbersome and prone to mistake, and the overdrive option should never be turned on for any reason.

The Lenovo Y27g succeeds in its industrial design, with smooth, easy adjustments to height, tilt, and swivel, USB ports, and a smart headset hanger built into the screen. Where it falters is with its lack of high resolution options, cumbersome menu design, and low contrast and response times.

It’s truly heartbreaking to see a gaming monitor do so well in some areas yet fail to excite in others. As a result, the Lenovo Y27g turns out to be disappointingly average.

The Y27g is an attractive monitor, but cumbersome menus and ghosting cloud its vision.

The Y27g is an attractive monitor, but cumbersome menus and ghosting cloud its vision.