THE NUMBER OF dedicated gaming monitors on the market continues to rise, and AOC’s new AGON line of monitors adds another fair few to the list. The TN-paneled AG271QX is the first we’ve seen from the range, and with its aggressive red and black design, it certainly looks the part of a serious gaming display. 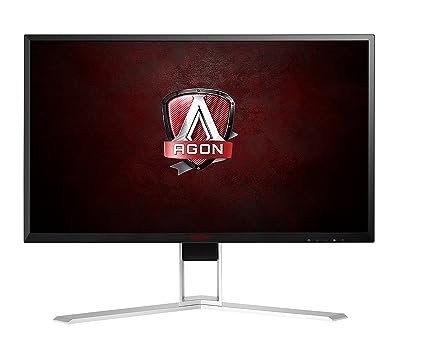 The specs suggest it has a lot to offer performance-wise, too. Running at 144Hz and 2,560×1,440, at £420 it’s simultaneously expensive for a 1440p screen and significantly cheaper than our current favorite 27in gaming monitor, the Acer Predator XB271HK – that does have a 4K resolution, but the AOC’s higher refresh rate (plus the fact that 1440p is less graphically demanding) makes it better suited to playing at high frame rates.

The AGON AG271QX is stacked with features, chief among them support for AMD FreeSync. When it’s hooked up to a compatible AMD graphics card, the AG271QX synchronizes its refresh rate with the GPU’s output, greatly reducing screen tear for smoother gaming.

What’s particularly good about the AGON AG271QX in this regard is its range – some FreeSync monitors can only engage FreeSync within a limited refresh rate range, so games running at lower frame rates don’t see the benefit. This monitor, however, has a Freesync range of 30-144Hz, so the effect works even at 30fps. That’s great if you’ve got a budget card or are playing a relatively demanding game.

It’s also very well made, with a sturdy stand that offers full pivot, height and tilt adjustments, and it looks great, with a red and black theme and a matt-silver foot.

The bezels are nice and thin as well.

The monitor also has a pair of 3.5mm jacks for your mic and headphones, and video inputs include DisplayPort 1.2, DVI, VGA and a pair of HDMI sockets, one of which is MHL-compatible.

Despite being part of the AGON gaming line, the monitor shares the same onscreen display (OSD) as other AOC monitors, and that’s a good thing: we’ve always found the AOC interface easy to use and feature-rich.

Within the OSD, you can adjust the gamma and color temperature, and fine-tune the red, green and blue levels. There are also options for a low-input lag mode, overdrive and a blue-light filter if you’re worried about late-night gaming disrupting your sleep.

The AG271QX employs a 2,560×1,440 TN LCD panel, which means its viewing angles aren’t as fantastic as an IPS panel. On the plus side, its 1ms response time is impressive – more on this below.

In our tests, the monitor achieved 96.5% sRGB color gamut coverage, a great result for a TN panel that suggests it may have been calibrated in the factory. Speaking of colors, we found color accuracy was impressive, too. With an average delta-E of 0.8, media editors and designers can be confident that what they see onscreen will be a close match to real-world printouts and broadcasts.

Brightness is perfectly fine at 307 cd/m2 in sRGB mode (it will go brighter, but this mode limits brightness to 90%) and we measured the contrast ratio at 1,078:1. The latter isn’t a bad result by any means, but it does lag behind VA panel monitors, which stretch out to 2,000:1 and beyond. If you’re used to gaming on such a screen, the colours might look a little washed out to you, despite the high colour accuracy and gamut coverage.

Of course, the AGON AG271QX has one purpose – gaming – and at that, it’s very good indeed. When playing Counter Strike: Global Offensive, a twitchy shooter, we found the AG271QX to be extremely responsive, and its Low Input Lag mode does exactly as it says.

The monitor’s already minimal response time can be reduced still further using overdrive, but we found that enabling the Strong Overdrive setting produced noticeable ghosting, which was unpleasant. Troublesome overdrive features seem to be a common theme with gaming monitors; even the much more expensive Asus ROG Swift PG27AQ saw added image artifacts with it switched on.

If you’re not going to be gaming competitively, the Medium Overdrive setting provides that sweet spot of relatively low response time and little to no ghosting, and this, combined with an impressively sharp 1440p panel, means games look great.

It’s safe to say that gaming is the AOC AGON AG271QX’s forte: it’s very responsive and offers low input lag. It’s ideal for those looking to upgrade from a Full HD 60Hz screen.

Still, what’s impressive about this monitor is that – with the exception of its contrast and viewing angles – it’s strong across the board. It’s not only a great gaming screen but also a capable all-rounder, with accurate colors, fantastic build quality and design, plus a wide range of inputs and outputs.

An impressive 2,560×1,440 gaming monitor, with a 144Hz refresh rate and good all-round performance