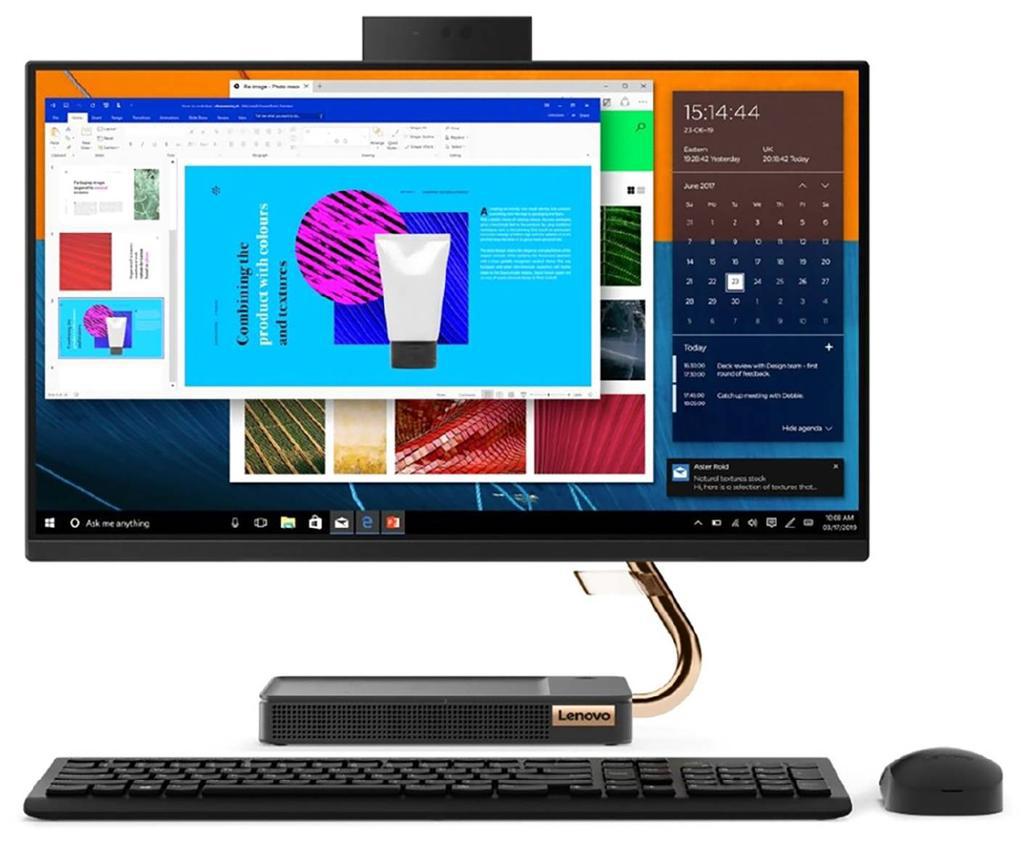 The Lenovo IdeaCentre AIO 5 is a new all-in-one PC that is aimed at people working from home who are after a stylish PC that doesn’t take up too much space on a desk.

That’s quite pricey for the specs on offer here, especially compared to traditional desktop PCs, though as it’s an all-in-one it does mean it comes with a screen – so you don’t need to buy an additional monitor.

Like any good all-in-one PC, the Lenovo IdeaCentre AIO 5 is a compact and convenient computer. With the components built into the base of the monitor, it means unlike normal desktop PCs, you won’t have to connect wires between the PC itself and the monitor.

Not only is it easier to set up, but it means you can move it more easily, and it takes up less space on a desk. This may be particularly useful for people looking for a new PC when working from home.

It’s a decent design, which feels like it’s aiming for a professional look for an office, rather than a stylish aesthetic for a studio. The screen itself is a 1440p display, which is fine, but can’t compete with the 4.5K (4,480 x 2,520) Retina display of the new iMac.

It means the screen isn’t as instantly impressive as some of its competitors, and there’s not as much workspace as on higher resolution screens. Stretched over 27-inches, it also doesn’t look as sharp as, say, a 4K screen would look. So for multitaskers, or photo and video editors, this isn’t going to be an all-in-one that appeals to you. But, for people looking for a day-to-day PC for their home office, the simple design and large screen may appeal.

The bezels around the screen are impressively slim, with a built-in JBL soundbar running across the bottom. It also has a pull-up webcam above the screen. This is a nice feature, as it keeps the surrounds of the screen slim, and gives you an element of privacy as well, as pushing the webcam back down inside the bezel will ensure that the webcam is blocked.

Resolution quibbles aside, the actual design of the screen is great. If Apple hadn’t given the iMac a major redesign earlier this year, we’d be tempted to say the Lenovo IdeaCentre AIO 5’s screen makes the iMac look outdated. That’s certainly true of iMacs from previous years.

The screen is attached to the base (which houses most of the actual PC) via a thick metal arm, which again looks pleasingly modern. Some components are situated behind the screen; there are USB ports, Ethernet, and two HDMI ports. The power cable is plugged into the base, however.

Speaking of the base, it looks a bit plain and non-descript, but it does the job. One thing we do like about it is that it has a built-in wireless charger. Put compatible devices like a smartphone on the top of the base, and it’ll start charging it. It’s a great feature that’s genuinely useful and worked really well when we placed a Samsung Note 9 on it.

This is the kind of feature we’d love to see in other all-in-ones, and it’s definitely one area the Lenovo IdeaCentre AIO 5’s design beats the new iMac. 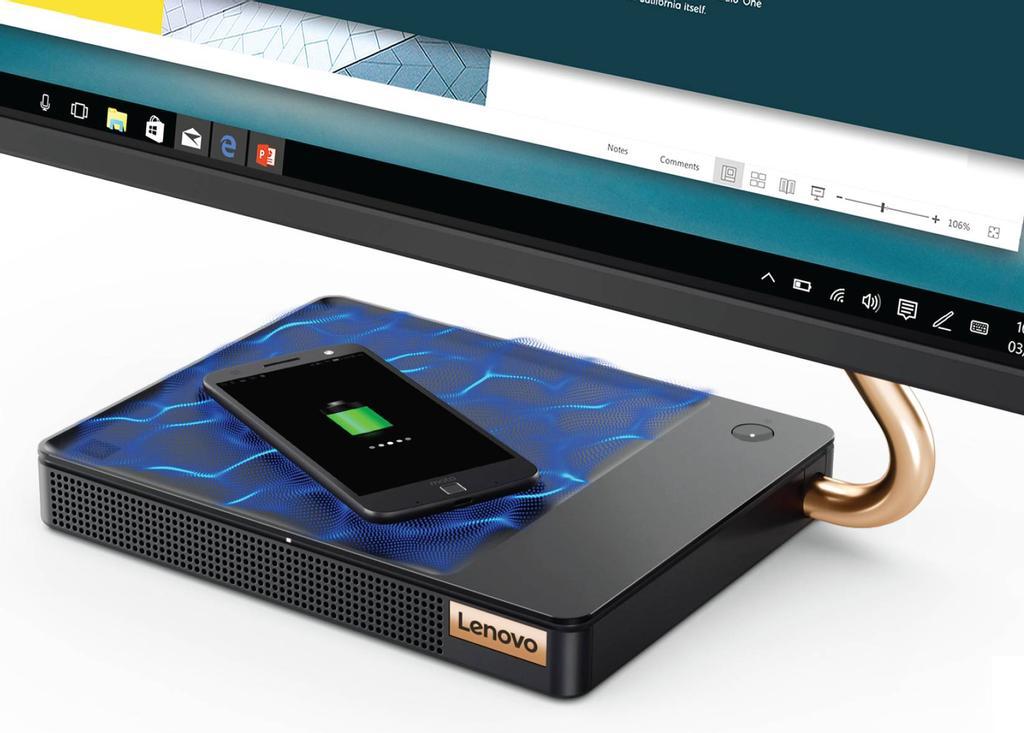 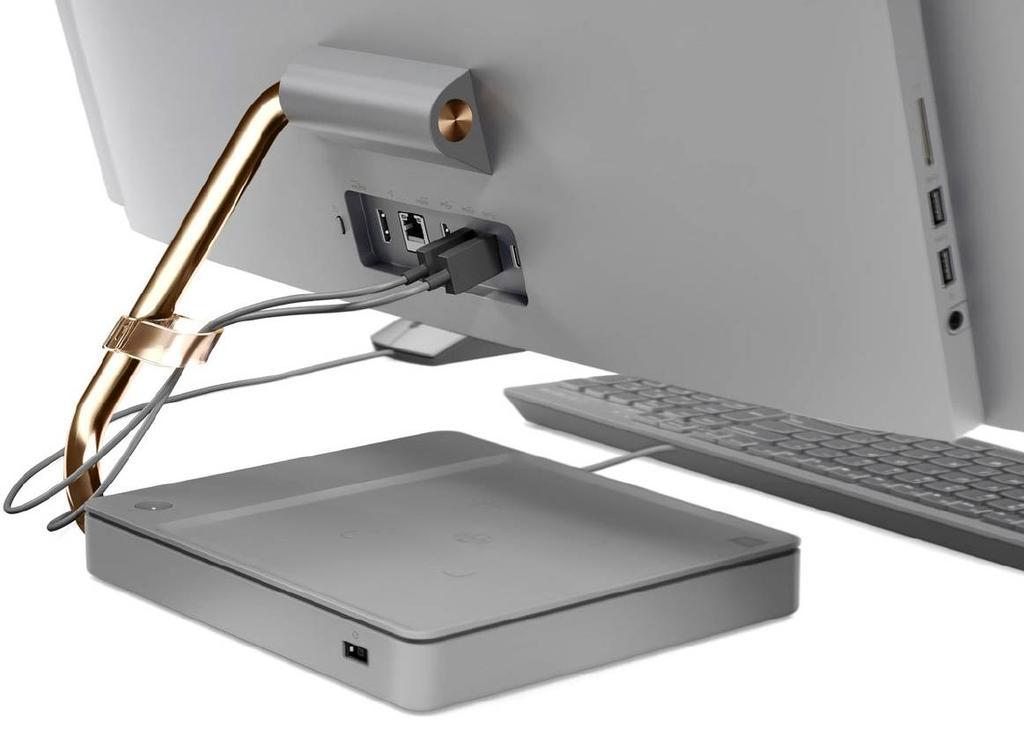 The Lenovo IdeaCentre AIO 5 also comes with a wireless keyboard and mouse, but these are very basic. They do the job, sure, but aren’t the best we’ve tried. For a start, they don’t use rechargeable built-in batteries, but standard AAA batteries.

They don’t come pre-paired with the Lenovo IdeaCentre AIO 5 either. Instead, you have to plug in a USB dongle before you can use them, which is a waste of a USB port.

It’s not the end of the world, but when you compare it with the out of the box experience of an iMac, where the rechargeable keyboard and mouse are already charged and paired with the PC, it just feels a little less polished and user-friendly.

When it comes to performance, things are a bit more disappointing. On paper, the specs aren’t bad, with the model we had coming with a 10th generation Intel processor and 16GB of RAM, plus plenty of storage space, but when using the Lenovo IdeaCentre AIO 5 for anything more than general day-to-day use, it starts to flag.

The Intel Core i7-10700T is an eight-core processor, but as it is a ‘T’ series chip, this means this is a less powerful variant, and is designed to throttle performance when under load. This means they are ideal chips for office equipment in that they can be more reliable over a longer lifespan, but it also means they aren’t much use for demanding users, as the performance just can’t match non T processors.

The limitations of the CPU are evident in the Lenovo IdeaCentre AIO 5 when we ran our benchmarks, as the throttling kicked in and performance dropped. The Lenovo IdeaCentre AIO 5 also has no dedicated graphics, so it relies on the integrated Intel UHD Graphics 630 GPU, which, again, is not much use for anything other than day-today office work. Heavy-duty photo and video editing is basically out of the question. We couldn’t get our Photoshop benchmarks to run properly, and when using the application to edit photos, it could take a while to load up, and applying some effects took a few seconds.

When working on particularly stressful tasks, the fans also kick in – loudly. Several people commented on the fan noise while we were testing the Lenovo IdeaCentre AIO 5. While it remained quiet during less intensive tasks, this could soon prove annoying.

But, like we say, for standard use, Windows 10 works fine. The built-in webcam, which is so important these days, is pretty good, with a decent level of detail, and the JBL speakers sound excellent. Voice, videos, and music all sound great, and you can raise the volume without distortion.

The Lenovo IdeaCentre AIO 5 is a decent all-in-one for office use, or for anyone how wants a PC for working from home. It has a good webcam and excellent speakers, and we love the built-in wireless charger, but performance just doesn’t cut it for intensive tasks.