LITTLE HAS CHANGED SINCE LAST YEAR, BUT THAT’S NO BAD THING ­ AND A BUILT-IN VPN ONLY SWEETENS THE DEAL

Kaspersky‘s 2016 suite won our security suites Labs with its flawless performance in independent malware protection tests ­ and the 2017 edition carries on the good work. In the most recent round of testing by AV-Test.org, Kaspersky Internet Security 2017 achieved a perfect 100% protection score ­ not only against prevalent malware, but also against two months’ worth of never-before-seen “zero-day” exploits. All without triggering a single false positive. 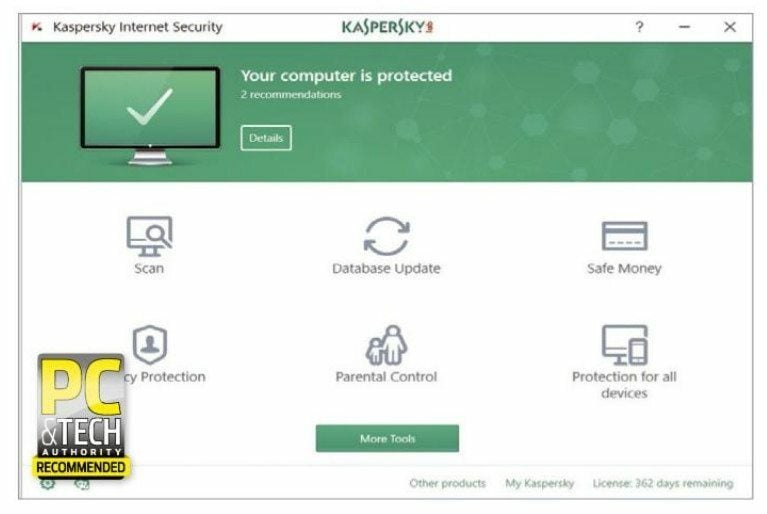 Another traditional strength of Kaspersky has been its low impact on system performance. Inevitably, on-access scanning of websites and applications entails a certain overhead. However, on Windows 7, KIS 2017 slowed web-page loading times by a modest 7%, and its impact on applications was a mere 5%. That makes it more nimble than even Microsoft’s minimalist Security Essentials, which had an impact of 12% and 8% in the same tests.

So far, so familiar, and in fact once you start clicking around the UI you may struggle to spot what’s new. The front-end is almost identical to the 2016 release: a few icons have been tinkered with and switched around, but the major features ­ Safe Money secure browser and Kaspersky’s parental controls ­ remain functionally unchanged.

There are a few new tricks to be found, though. One is a new Software Cleaner function, tucked away under “More Tools”, which can find and remove potentially unwanted programs from your system ­ as well as flagging up applications you’re simply not using, so you can ditch them and reclaim the disk space. The handy new Software Updater module lets you know if you’re running any outdated programs that need updating, whether for features or security.

The real headline is the new Secure Connection VPN service. This aims to protect your online privacy by encrypting all your internet traffic and routing it via a trusted third-party relay. When the VPN is switched on, anyone trying to spy on your online activity won’t be able to tell which sites you’re connecting to, or what you’re doing there ­ even your ISP will see only a string of encrypted data going back and forth between you and the VPN operator. The sites you visit won’t see the real origin of your connection either, which limits their ability to track you online.

It’s important to note, however, that Kaspersky’s service has some limitations. Your KIS licence entitles you to relay a maximum of 200MB of encrypted data per day: that should be plenty for all your sensitive transactions, but it isn’t enough to let you keep the VPN switched on all the time. You’re also limited to routing your traffic through an Australian server, so you can’t use the VPN to access region-restricted sites. An optional US$29.99-a-year upgrade gains you unlimited data and a choice of exit nodes in 18 different countries. That’s pretty cheap by VPN standards, but it still more than doubles the cost of the overall package. For short-term use, there’s also a US$4.99 monthly option.

The other thing to be aware of is that Secure Connection isn’t operated by Kaspersky itself; it’s a licensed gateway to the popular Hotspot Shield VPN, which is based in the USA. That might sound like a good solution for overall net speed performance, but be warned: there are intelligence-sharing agreements between Australia and the US that could theoretically be used to trace your VPN connection back to you. Dissidents and would-be whistle-blowers might want to seek out a service based in a less cooperative jurisdiction.

It looks almost identical to before, but there are significant new features tucked behind the scenes

Kaspersky Internet Security 2017 isn’t a revolutionary upgrade ­ its few new features only enrich what was already a first-rate package. As with previous editions, it isn’t the perfect choice for everyone. The sheer range of features can feel overwhelming, and in my first few days of use it popped up alerts and recommendations slightly more often than I’d like. If you’re looking for “set-andforget” simplicity, Bitdefender‘s Autopilot mode might suit you better.

All the same, it’s hard to complain about the degree of protection and versatility Kaspersky offers. And another thing that hasn’t changed is the free update from last year’s edition ­ which means you can save money by buying a discounted copy of KIS 2016 and immediately upgrading. Even at full price, when you factor in the daily chunk of VPN access that now comes as part of the package, Kaspersky Internet Security 2017 is a very persuasive proposition indeed. Darien Graham-Smith