You used to know where you stood with Novafidelity – the Korean company has built a strong reputation for its digital music ripper/storage/ player combinations since it made its debut in the UK under the Cocktail Audio brand. But things have moved on a bit since then, and although its range still starts from as little as £ for its X14 all-in-one streamer system (HFC 446), it is challenging past preconceptions of the brand as a budget one with its recently introduced X45 Pro streamer/DAC, or less for the X50 Pro all-digital version, meaning that Novafidelity is no longer just a budget alternative, but is tackling the big boys head on.

With that expansion has come diversification – just will now buy you the N15D, which is a combined network audio/USB player, complete with internal space for a 2.5in hard drive, Roon-ready status and USB inputs for both storage devices and computers. And then there’s the HA500H…

Unlike the other models in the range, this is a headphone amplifier/ DAC lacking any kind of network connectivity, let alone the internal

storage options also produced by Novafidelity. But if that makes the HA500H sound a bit bare-bones for the money, it’s anything but. This is a particularly flexible device for those committed to headphone listening, not to mention one capable of exceptional performance.

With casework and design likely to remind those with a long memory of the much-lamented Oppo HA-1 headphone amp (HFC 390), which like some very fine headphones became a victim of its parent company’s decision to withdraw from the audio market to concentrate on mobile phones, the Novafidelity offers a wide range of options for the headphone listener. For starters, it’s both a headphone amp and a DAC, and with its built-in volume control can also be used as a preamp straight into a power amplifier or even active speakers. Both unbalanced and XLR balanced outputs are available, with the HA500H also having the same choice of analogue inputs, so that it can be fed straight from a source component or the line outputs of a conventional amplifier.

Those analogue ins are in addition to a comprehensive choice of digital options. As well as optical, coaxial and AES/EBU balanced digital, there’s also an asynchronous USB-B, so the Novafidelity can be fed straight from a computer, Bluetooth for wireless use with mobile devices (supporting A2DP and AVRCP profiles, and SBC, aptX, AAC and MP3 audio formats), and an HDMI input socket. The USB feed expands the file format range of the HA500H all the way up to DSD256 and 32-bit/384kHz PCM, and also offers MQA decoding.

And that HDMI socket? No, it’s not to take sound from your video player or TV, but Novafidelity’s connector of choice for the I2S digital connection format, which conveniently is also supported by the company’s high-end streaming transport models, the X50D and aforementioned X50 Pro. I2S, or Inter-IC Sound, is the serial bus format used within digital components to transmit data, in which clock data is transmitted separately from the signal information – meaning the receiving device doesn’t need to extract clock information from within the music datastream. Here it also supports formats up to DSD256 as well as MQA.

The digital-to-analogue conversion chip is from ESS, with a 32-bit Sabre ES9018K2M DAC for each channel, allowing both dual monaural design and balanced working, for low noise, enhanced dynamic range and greater precision. In addition, the analogue and digital sections are separated right back to their power supplies, the unit using both a toroidal transformer and a switch-mode supply.

Analogue inputs are passed through an analogue-to-digital converter for processing within the HA500H, with the unbalanced input first converted to balanced in the input buffer, in the quest for interference rejection within the circuitry.

As far as headphone outputs are concerned, there’s a choice of balanced or unbalanced sockets and low and high outputs to match the unit with a variety of ancillary equipment. The company claims an output of up to 8V to the balanced preamp outputs and up to 4V to the RCA phonos in High mode, while with the same setting the headphone outputs max out at 485mW and 125mW per channel respectively into 600ohm. In Low mode, the figures are 4V/2V/120mW/31mW Into a 16ohm headphone load, unbalanced, the output is claimed as 1100mW per channel in High and 450mW in Low.

Enough flexibility for you? Well, the HA500H has a final trick up its sleeve, with two user-selectable output stages

–      instead of the conventional solid state output you can choose to bring into play a valve-powered output stage, should you wish. This uses a pair of ECC82 valves, complete with customisable illumination and either output stage can be used for both headphone sockets and the pre-outs

–      the latter being available at variable level for use direct into power amplification or fixed should you be using the unit as a conventional DAC into a preamp or integrated amplifier.

With so much on offer you might expect the Novafidelity to be a nightmare to set up and use, but the provision of a clear remote control, plus a bank of front panel buttons

–      covering ‘tube’ mode on/off, high/ low impedance and switching between line and headphone output and balanced/unbalanced headphones – makes it pretty simple to navigate. There’s also a choice of displays on the large, clear screen, not just showing all the set-up parameters but also level meters either as virtual swing-needles or bar-graph readouts. I’d give all the bouncing meters a swerve, but your taste may differ.

Having tried the HA500H with a wide selection of different headphones (both conventional and balanced) and sources (analogue and digital), there are a few immediate conclusions to be drawn. One is that, with its healthy output and controls to optimise it for the headphone with which it’s used, this is an exceptional product for anyone that’s serious about their personal listening that delivers a sound as big boned and powerful as it is finely detailed and sharply focused. The other is that to hear it at its best, you should use it as simply as possible, connecting a CD player or network streamer digitally to give as clean a signal path through the unit as possible.

If there’s a drawback, it’s that an analogue input takes a relatively complex route, via analogue to digital and then back again, bringing with it

You might expect the HA500H to be a nightmare to set up, but it’s pretty simple a concomitant softening of the sound and slight loss of impact and detail that’s immediately apparent when feeding the HA500H with the excellent Leema Elements Streamer (HFC 448), which uses similar DAC technology to the Novafidelity. Even with the ability to connect the two in balanced analogue, superior results are achieved with a simple coaxial digital, thus taking out at least one stage of D-to-A-to-D conversion. Even with the superior sound of Naim’s reference ND 555/555PS DR network player – or especially with this front end in harness – the differences are similarly pronounced.

The HA500H is best heard with a USB connection from a computer playing music. With a relatively 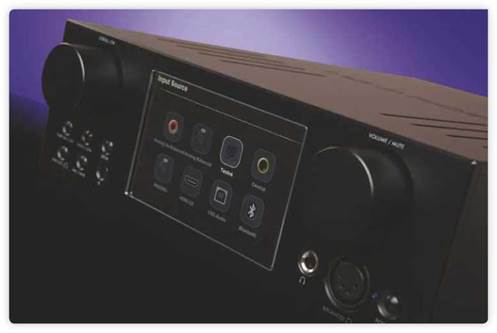 modest Mac setup running Roon and fed from an Intel NUC acting as the core, playing music from a large QNAP NAS allows the Novafidelity to shine, whether used as a headphone amp for Oppo’s PM-1 headphone with balanced connection or Bowers & Wilkins P9 Signature (HFC 421).

With the many varied styles and influences of Coldplay’s Everyday Life in 24-bit/96kHz, the way nuances of the recording spring out is as persuasive as the overall rhythmic drive and the way the catchier tracks – such as the angry Guns – work their way into the listener’s head. And with the drop dead voice of Rachael Price on her Rachael And Vilray set, the HA500H just about places every breath in your ear, with a gloriously luminous presentation packed with both character and soul.

With the basic sound being both gutsy and fine detailed, is the valve output option here the magic bullet for those who prefer their music rich and lush? Not quite. While there is a difference when switching between the two output modes, in that the valve stage is a shade smoother and warmer, it’s not a radical change, and the effect will vary according not only to the headphones with which the amplifier is paired, but also from album to album.

For me the valve balance is a bit too rich with the Bowers & Wilkins headphone – which has a similar character – while the solid state stage perks it up a bit, whereas with the studio-oriented Focal Spirit Pro headphone the valve output does a good job of warming things up a little.

With its combination of workmanlike build, solid engineering and supreme sound, the HA500H has an obvious appeal to headphone enthusiasts. Keep the inputs digital and go easy on the flexibility on offer, and this is a fine choice for those that are looking for a combined DAC and headphone amplifier for home use •

There’s no shortage of amps out there, starting at almost pocket-money prices for little USB sticks to plug into a computer. But the HA500H is in the thick of the action, sitting between the likes of the fine Audiolab M-DAC+ (HFC 449) and Naim DAC-V1 and the exotic, if quirky, Chord Hugo TT2 . Factor in that balanced drive capability and a simple, logical interface, and Novafidelity could just be onto a winner here.