How to buy an SSD

They’re much faster than hard drives, and the prices aren’t as scary as they used to be. But which SSD do you need?

An SSD (solid-state drive) uses processors instead of spinning magnetic plates to store data permanently. They cost more per gigabyte, but they are up to 10 times faster.

Installing Windows 10 on an SSD means your PC starts up quicker, programs load in a blink, and switching between tasks feels smoother . If you can afford enough SSD capacity to store photos and videos, editing them will be faster. Alternatively, you can copy only what you’re currently editing to an SSD.

If you have a desktop PC, the best place for storage is inside, where it can connect directly to the motherboard. It may also be possible to replace the 2.5in drive in a laptop, but it’ll usually be harder to access. Some PCs come with unpackaged SSDs wired in, and can’t be upgraded.

If you can’t upgrade internally or need to share a drive between PCs, connect an SSD to your fastest external port.

You can buy external SSDs ready to plug in, or buy a drive enclosure for the appropriate interfaces and insert a 2.5in SSD (such as the ones reviewed here) into it. The enclosure, as well as the interface and the drive, may affect the speed. StarTech’s USB 3.1 to SA TA III enclosure is a popular choice.

Most internal drives are connected via SA TA III, also known as SA TA 6G. Some PCs let you connect this externally as eSATA (see image below). At a maximum of six gigabits per second (Gbps), or 750 megabytes (MB/s), SA TA III is only slightly faster than USB 3.0 or USB 3.1 Gen 1, at 5Gbps, and slower than USB 3.1 Gen 2, which can reach 10Gbps.

So if your PC has a USB 3.1 port – which may be the familiar rectangular USB Type-A , or the smaller USB Type-C – you’re not losing any speed by plugging in a USB 3.1 SSD rather than a SA TA drive.

Thunderbolt connectivity, which may be provided by a Type-C port or a Mini DisplayPort-style socket, also works at up to 10Gbps, while Thunderbolt 2 doubles this and Thunderbolt 3 (exclusive to Type-C) supports 40Gbps. However, Thunderbolt drives are more expensive, and most won’t exceed 10Gbps. You can only tell which interfaces and speeds a USB socket supports by checking your PC’s documentation.

Internal SSDs can also be connected via M.2, a version of PCI Express available on the latest motherboards. M.2 formats vary – the fastest being NVMe. But all of these SSDs look like a small circuit board with processors on it, a bit like a RAM module. If your PC has M.2, that’s probably the way to go.

Most SSDs now use MLC (multi-level cell) or TLC (triple-level) flash memory, which stores more bits of data in each cell than SLC (single level), and many are 3D, meaning cells are layered to pack more in. This can reduce reliability , but other improvements have made up for that.

All SSDs will eventually wear out.

Sellers quote figures relating to TBW (terabytes written) and MTTF (mean time to failure, basically how long it ’s got to live). If you saved 50GB of files every day, a 200TBW SSD would be expected to last 11 years. MTTF is typically at least 1.5 million hours, which should be long enough for most people.

Trim is a feature that lets you avoid overwriting data that hasn’t changed, which helps minimize an SSD’s tendency to slow down over time. All versions of Windows since Vista support Trim, and SSDs will use it if it ’s beneficial.

Some SSDs also incorporate hardware encryption, but this will only work if you set it up using Windows Professional ’s BitLocker or a PC that supports the Opal 2 storage specifications.

SSD: WHICH TO BUY?

Samsung’s second-best M.2 SSD is better than most others you can buy. It ’s more expensive than the WD Black, but about a third cheaper than Samsung’s 960 Pro, which was the only drive to beat it in most of our speed tests. Its lead in multi-threaded random performance – reading and writing data in the background – was fairly narrow , but in sequential reads and writes (loading and saving large files) it was over three times faster than SA TA SSDs. It also supports encryption. The likes of the Adata SU900 performed similarly in our program tests, so don ’t feel obliged to spend the extra on the 960 EVO, but it does the top combination of price and speed.

Here’s another SSD that comes with a 2.5mm spacer and Acronis True Image HD. Its 449MB/s read speed was the slowest in this test, but only by a whisker, and all its other scores were fine. This 525GB version is great value, and it comes with encryption, too, if your PC’s hardware supports Opal or you have Windows Pro. The TBW rating of 160 is on the lo w side, but for most domestic users it’ll still outlive your PC. This SA TA drive is also available for M.2, but the quoted performance is no better (the same goes for the two versions of Adata’s SU800). To use M.2 for superior performance, you’d need to choose a pricier NVMe drive, such as Samsung’s 960 EVO (see left).

SA TA III is used to connect both 2.5in drives (top), including SSDs, and 3.5in hard drives (bottom) 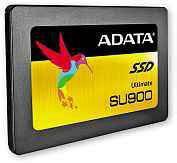 There’s nothing really ‘ultimate’ about this SA TA drive, but it ’s as fast as rivals in this price bracket. Our basic write test reached 475 megabytes per second (MB/s), and reading 524MB/s, while it matched even pricier drives in our tougher Photoshop test. It comes with a couple of handy extras: a code to download Acronis True Image HD 2015, which makes it easy to transfer Windows from your existing drive, as well as a 2.5mm spacer to neatly replace a laptop drive, and a 3.5in bracket for installing in a desktop PC that doesn’t already have 2.5in adapters. It doesn’t have encryption, but that’s not essential.

WD’s Black range is known for above-average performance, and this is certainly an above-average M.2 SSD at a pretty reasonable price. It actually beat the pricier Samsung 960 Evo in multi-threaded random read and write tests, and kept up with it in our real-world tests using programs like Photoshop and Excel. But it fell way behind in the sequential tests, which let drives show off their maximum throughput.

The 960 Evo was 50 per cent faster reading and 100 per cent faster writing. Nor does it have encryption.
Even so, it ’s a relatively affordable way to promote your PC’s storage speeds from the SA TA championship to the NVMe M.2 Premier League.