Head to head: Hard drive technologies – Jeremy Laird pits the magnetic hard drive against SATA SSD and M.2 NVMe technologies in a head-to-head battle to discover which one is superior.

Storage was once the final frontier of PC performance, and the last component to become fully solid state. 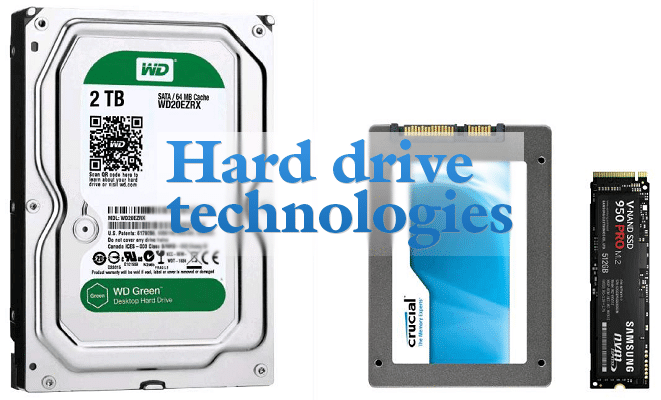 Today, the latest M.2 SSDs powered by the new NVMe protocol and hooked up via zappy PCIe connections deliver performance that a conventional hard drive wouldn’t recognize. Yet the hard drive isn’t dead. Not when it offers so much capacity for so little money. Meanwhile, the trusty SATA SSD offers a combination of compatibility and speed that’s awfully compelling. Time to find out which storage technology is the best.

You might think the choice between old-school magnetic drives, conventional SATA SSDs and the latest M.2 items was a total no-brainer.

For the most part, you’d be right. Magnetic drives, with their quaintly spinning platters and delicately servo’ed read heads, certainly don’t stand a chance when it comes to raw performance. They’re OK at sequential workloads, albeit offering about one tenth the speed of a decent SSD at best, but they really suck when it comes to random access.

SATA SSDs, meanwhile, may be pretty quick, even by modern standards, but they’re ultimately held back by both the SATA interface itself, which caps peak performance at about 550MB/s, and the elderly AHCI control protocol, which was never intended to be used with solid-state tech.

So if s M.2 and its zippy PCI Express interconnect that easily rules the day, with the latest drives topping 3GB/s for peak performance, and packing the highly optimized NVMe control protocol. The catch is system compatibility, and that’s why M.2 isn’t a complete no-brainer. Especially for older PCs, a SATA SSD may be the most painless path to decent storage performance.

Spare a thought for the poor old conventional hard drive. In this brave new age of solid-state computing, the very notion of moving parts seems utterly antediluvian. But this is its chance to shine. When it comes to raw storage capacity, those spinning magnetic platters positively annihilate the solid-state alternatives.

Perhaps most impressive is the fact that while CPU performance has somewhat stagnated, and the power of Moore’s Law to predict chip shrinkage may well have stalled, the ability of magnetic hard drive makers to pack in even more capacity hasn’t waned at all. Innovations such as the use of helium to reduce internal air shear saw the 10TB barrier cracked last year in the consumer drive space, and that progress looks set to continue, albeit at quite a price.

Aim a little lower, and the likes of a 3TB drive are now available for as little as — and even less if you’re willing to roll the dice on a refurb.

The only caveat is that, if you don’t have a big video or games library, you probably don’t need a big hard disk at all, and a much nippier budget SSD of around 500GB is probably all most mainstream users will ever actually need.

Given the radical change in technology represented by solid-state storage, it’s surprising that it wasn’t accompanied by major compatibility problems. However, thanks to adopting existing standards, including the SATA interface and support for legacy IDE and AHCI control protocols, SSD compatibility has been, for the most part, a breeze. SATA ports have been standard on nearly all motherboards for a very long time.

So whether your SATA drive is solid state or magnetic isn’t hugely consequential in compatibility terms. But things get more complicated when it comes to those newfangled M.2 drives. Any motherboard more than two years old almost certainly lacks an M.2 port. What’s more, having an M.2 port doesn’t automatically mean support for the highly desirable NVMe control protocol.

Granted, it is possible to buy M.2 PCI Express adapter boards to add support to legacy motherboards. But the older your mobo, the more likely it is to have issues supporting booting from the drive and, again, that NVMe protocol. It’s also worth remembering that your M.2 drive will only be as fast as the PCIe lanes provided by the motherboard.

What price do you put on capacity or performance? That’s the conundrum you face when sizing up the value of the various storage options. You cannot maximize both attributes. Solid state prices have come down, but when it comes to GB/$, they’re still obliterated by traditional magnetic storage.

A 3TB hard disk, for instance, works out at around 24GB per dollar. Matching that capacity with an SSD will cost you roughly 10 times as much. For example, at the sweet spot of current SSD GB/$, which is probably the 1TB segment, you can get roughly 2.5GB per dollar. And that’s for a budget-oriented SATA SSD. The fanciest M.2 drives are even worse in terms of value.

Of course, shift your priorities toward performance, and the tables are resolutely turned. When it comes to random access performance, which is especially critical for everyday performance and responsiveness, SSDs can be over 100 times faster than magnetic drives. That said, the cheaper end of the SATA SSD spectrum probably gives you the best bang for buck. But take care to avoid the very lowliest, which often use cheap controllers intended for USB drives, to save money.

This is the most contentious metric. Firstly, that’s because durability can mean different things. For a portable PC, a solid-state drive is a huge bonus, and has the potential to be far more robust than a fragile magnetic drive, with spinning platter and moving read heads.

For a desktop PC, where physical shocks and exposure to extreme temperatures are less common, durability is all about the ability to soak up a lot of bandwidth, without losing performance and capacity, or failing.

The early days of SSDs were grim in that regard. Outright failure wasn’t that common, but a drop-off in performance was inevitable over time. Six months of heavy use could truly hammer those first SSDs.

Since then, multiple technologies, including advance wear leveling and garbage collection routines, have dramatically improved the situation. Of course, the performance of hard drives can go off over time, too, with data fragmentation. But that’s usually fixable with a little defragging.

Overall, however, the very best M.2 SSDs can be had with warranties and life expectancies of around five years, even with very heavy workloads.

On balance, they’re probably now the most robust storage technology.

“Before you splash out on a new storage device, think about whether your priority is speed, cost or a balance of the two, then take your pick”

And the winner is…

Call us indecisive, but the final verdict on which storage medium is best really has to come down to your own personal usage model. If you want to maximize sheer capacity, for instance, a conventional hard drive is an absolute no-brainer. It’s literally an order of magnitude cheaper. Even if money is of no consequence, one can only connect so many drives, and hard disks are simply bigger.

On the other hand, if performance is your exclusive priority, then one of the latest M.2 SSDs with support for the NVMe protocol should be your weapon of choice. These solid-state devices now deliver performance measured in gigabytes per second, which you have to admit, is pretty stunning.

However, perhaps the best overall compromise of value, performance and compatibility for now is an SSD hooked up via the good old SATA interface. It’s a fantastic way to give and ageing PC new life.

So before you splash out on a new storage device, think about whether your priority is speed, cost or a balance of the two, then take your pick.