Freespire 3.0 review – The word revival is rarely used in conjunction with dead distros, but Freespire has done just that thanks to new management, discovers Shashank Sharma.

» Freespire was originally called Lindows and quickly became popular with users looking to move away from Windows, but not its appearance. Based on Ubuntu and powered by XFCE, the latest iteration is aimed at new users. Ubuntu. Linux Mint. Mageia and most popular distros are comparable alternatives.

Even with its first release, the distribution quickly managed to polarize the Linux community with its design, pitching ease of use as its greatest feature. No. we’re not talking about Ubuntu. but the original Lindows OS. designed to emulate the look and feel of Windows. With its last release in 2007 the Linspire/Freespire distros died a quick death after being taken over by Xandros in 2008. A decade later, news broke of the release of Linspire 7.0 and Freespire 3.0. now owned and developed by PC/ OpenSystems LLC, the group behind Black Lab Linux.

The original Lindows underwent major upheaval in the years since its launch, including a change of name and management. The project was also one of the first to offer a free desktop distro, named Freespire, along with a commercially licensed variant offering support under the brand name Linspire.

The subject of our review is Freespire, which is the same as the commercially offered Linspire, stripped of its proprietary bits and blobs and lacking some other popular software. The distro is available as a Live-installable ISO for 64-bit machines and features tools and software released under the GPL. GPLv3. BSD and a slew of other open source licenses. 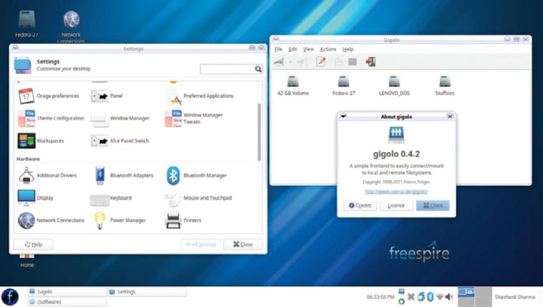 Along with XFCE desktop environment, the distro features Geary email client and other lightweight tools to deliver a speedy performance.

At just 1.5GB. the distro is sparse. Its default software offerings feature none of the bulky apps that are the mainstay of most modern distros. For instance. Freespire doesn’t ship with Gimp or even a complete office suite. Offering DejaDup backup tool and MintNanny domain blocker out of the box. along with a host of everyday internet and multimedia apps is a welcome decision, but some of its choice of default apps is puzzling. The distro ships with two orthodox file managers along with Thunar. There’s also a tool to help you set up a PPP connection!

Despite being in development since June 2016. the distro ships with some minor bugs. Although it doesn’t report any errors, the MintNanny domain blocker doesn’t work as advertised. You can add and remove domains easily enough, but one can still easily access the websites. Also, you won’t find the Settings Manager under the Settings sub-menu. Instead, you must click the button to the right of the search bar at the bottom of the launcher. We also found the Search bar to be fast and effective, which doesn’t explain the inclusion of the File Searcher app, which is designed to help users find their favourite from among the installed apps.

While the latest release is based on Ubuntu 16.04 LTS and will be supported until 2021. the project doesn’t provide any information about upcoming releases or features the project is working on. apart from a list of dates for future Linspire/Freespire releases on the Linspire website. For all intents and purposes. Freespire is a completely new distro, with little to tie it to previous releases except the name. In such a scenario, it’s imperative the project reassures users that it will be around for a while and not just disappear yet again.

Worse still. Freespire doesn’t host any documentation on the website, apart from a two-page PDF installation guide. While this is to be expected since the project sells commercial support solutions, there also isn’t any means to connect with the user community.

Although usable, its current release offers no reason for users to switch from their current Linux distro. Furthermore, the lack of information on future releases is another reason why we would advise users to adopt a wait- and-watch policy.

Freespire 3.0 review: Features at a glance

The choice of Ubuntu makes Freespire easy to use and you also won’t want for general support.

It’s lightweight and fast, but that’s relatively common. Lack of clarity over future releases will hurt its adoption.