Ben Hardwidge takes you through the workings of various types of floppy disk, which were once the PC’s main storage medium

The classic 3.5in HD floppy disk has become a bit of an icon now, and in more ways than one. Plenty of people will tell you that their kids think of a floppy disk as the Save icon in Word. The 3.5in floppy is also what most people imagine when you say ‘floppy disk’ – a plastic case with a spring-loaded metal proteclor and a 1.44MB storage capacity. The history of floppy disks goes back well beyond these neat little storage packs though.

My first experience of multiple types of floppy disk came when my dad bought me a game (Targhan, in case you’re interested) for our PC XT clone in 1988. I opened the box, and inside it were two 5.25in disks. We had to send it back to get the version with 3.5in disks, which took ages because, at the time, hardly anybody used 3.5in disks for PCs. All the major models, from the IBM PC to the Amstrad PC1512 and PC1640, had one or two 5.25in floppy drives instead.

Floppy disks were the main form of storage for the first decade of the PC’s history, in many cases the only form of storage. But the history of the floppy disk goes back even further than the first PCs For the purpose of this feature, I got hold of one of the very first types of floppy disk, an 8in single-sided single-density disk. It’s huge. You can put a 50p piece in the central spindle hole with space to spare. It holds a formatted capacity of just248KB.

The floppy disk was one of the ‘first solutions to the problem of transferring data from one place to another. We’d used punch cards, punched tape and magnetic tape, which worked, but were laughably awful in terms of reliability, convenience, space and the length of time taken to load and save data. In 1971, IBM’s first read-only Type 1 diskette’ was an attempt to solve these problems in a neat 8in package, capable of storing 81KB. In 1973 it became commercially available with read/write abilities, and a larger capacity of 248KB.

Magnets, how do they work?

Floppy disks work on the basic principle of magnetic binary storage. As you probably know, all computer data can be broken down to simple on-off switches called bits at its most basic level – if the switch is off, it’s a zero, if it’s on, it’s a 1. There are eight bits in a byte, 1,024 bytes in a kilobyte, 1,024 kilobytes in a megabyte and so on.

Inside the package of a floppy disk is a circular piece of magnetically coated material with a hole in the middle, and a piece of protective fabric on either side of this material to protect it. In the case of 8in and 5.25in disks, the hole is left blank for the drive’s spindle to go through it. In the case of 3.5in disks, there’s a metal plate in the middle with holes in it, onto which the floppy drive can lock.

Once the heads make contact with the disk, and the disk is spinning, the drive can then read or write data – a magnetic transition denotes an on (1) switch, while no magnetic transition means an off (0) switch. All the ones and zeroes are encoded/decoded in a bitstream, and in the 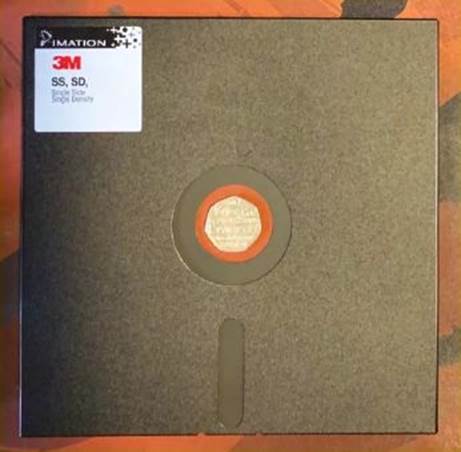 A single-sided, single-density 8in floppy disk, with a 50p coin for scale. It has a total formatted capacity of 248KB

case of 5.25in and 3.5in floppy disks, this is generally MFM (modified frequency modulation), although there were other encoding methods in the early days of floppy disks.

Going into the complete workings of MFM would take a feature in itself, but the basic gist is that it introduces a clock to separate the bits in the bitstream. After all, a computer would have a tough time reading a long line of zeroes in a row, with no magnetic transitions between them to tell it whether this was one ‘off’ bit or several of them. The idea behind using FM and MFM data encoding was to enable a non-return-to-zero (NRZ) system, so there was never a state where there was neither an on nor off signal.

An FM bitstream can encode a 0 as 10 and a 1 as 11, for example. MFM is more complicated than just using 10s and 11s, but the principle of using a clock to separate the bits is basically the same. Incidentally, MFM was also the standard used in early hard drives, including the Amstrad PCs in the late 1980s, before IDE was introduced.

Towards the latter days of the floppy disk’s reign, you could buy disks pre-formatted for your type of computer, but you originally bought them unformatted. In this unformatted state, there’s nothing on the disk. It’s a blank, circular piece of magnetically coated material. You would then have to tell your computer to format it for your system. In my case, that meant typing ‘format a: /w’ at the DOS prompt.

The ‘/W’ means ‘wait’ – like many people at the time, I couldn’t afford a hard drive, so I had to boot DOS from a floppy disk called a system disk each time I started my PC – this system disk also contained all the DOS commands, so you would have to type the format command with the system disk in the drive, then swap over to the unformatted disk when prompted – you really didn’t want to accidentally format your system disk!

The formatting process would then prepare your disk for reading and writing. Unlike the spiral of data used on most CDs and DVDs, floppy disks organise data in ‘tracks’ – concentric circles that are separated by small areas containing no data.

These tracks are then, in turn, separated into sectors containing a certain number of bytes, with unused bytes on either side of the sector and a header to mark the start of the sector.

This header also contains a cyclic redundancy check (CRC), which was also placed at the end of the data used in each sector, for error checking.

There are many blank spaces, and bytes to denote start and end points for tracks and sectors, which is part of the reason why the formatted capacity is always lower than theoretical maximum capacity of a disk.

In the case of the classic 3.5in floppy disk, you had 512 bytes per sector on a PC. Depending on your disk (and your hardware), you could also use both sides of the disk, doubling the storage capacity. The other way to increase the capacity was with the ‘density’, the number of tracks and sectors per side.

DD) disk with 720KB. The next step, once you’ve developed read/write heads that are small enough, is to double the density again, taking the number of tracks per side from 40 to 80, and doubling the capacity, which gives us the 1.44MB HD floppy.

I’m referring to PC standards here, of course, but other computers, such as the Amiga and Mac, had more efficient ways of formatting disks that resulted in higher capacities. With a continuous motor speed, every sector held the same amount of data, regardless of whether it was on the inner or outer part of the disk area. As you move from the centre of the disk outwards, however, the sectors become physically bigger, which means space is wasted on the outside area of the disk, where there should be more room for data storage. 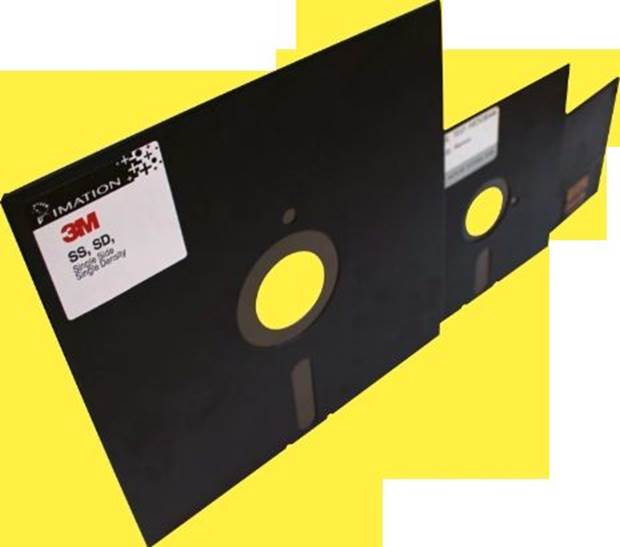 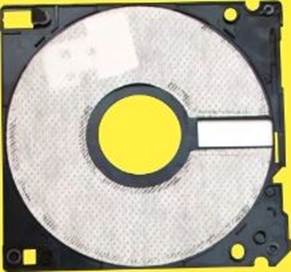 Inside a 3.5in disk’s plastic shell is a small floppy disk with a piece of protective fabric on either side 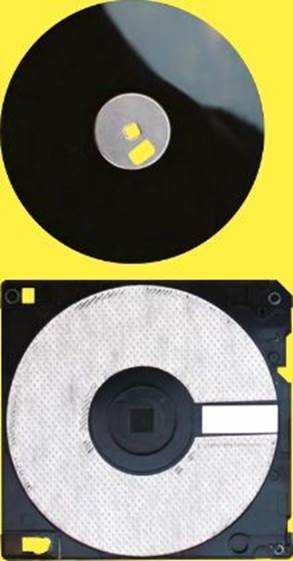 A Double-Density 3.5IN Floopy DISK HAS 40 TRACKS PER SIDE, EACH CONTAINING 18 SECTORS

You also got wildly different amounts of formatted storage space from the same physical size of disk on different systems in the early years of the floppy, as there were so many different software standards, all with different sector sizes and formatting systems.

It all resulted in a bit of a confusing mess of different standards, across all sizes of floppy disk. The 8in floppy started off being single-sided, single-density (SS/SD) in 1973, but ended up with a 1.2MB (unformatted) capacity in 1977 thanks to doubling the density and the number of sides used. Likewise, 5.25in floppy disks also had an 80-track high density flavour that gave you up to 1.2MB of data on one disk.

The cost of storage

In these times when solid state drives are racking up huge speeds and capacities, it’s difficult to imagine a hard drive being a luxury item, but hard drives were extremely expensive for a long time – just 10MB could cost you thousands of pounds.

It’s for this reason that many PCs came with two floppy drives in the early days – you’d generally use the A drive for your OS and programs, and the B drive for data. There’s still a bit of this residual DNA in PCs today – we may not have A and B drives any more, but our primary storage devices are still C drives, with the assumption that Windows reserves A and B for floppy drives.

The 5.25in floppy disk was once the standard for PC storage 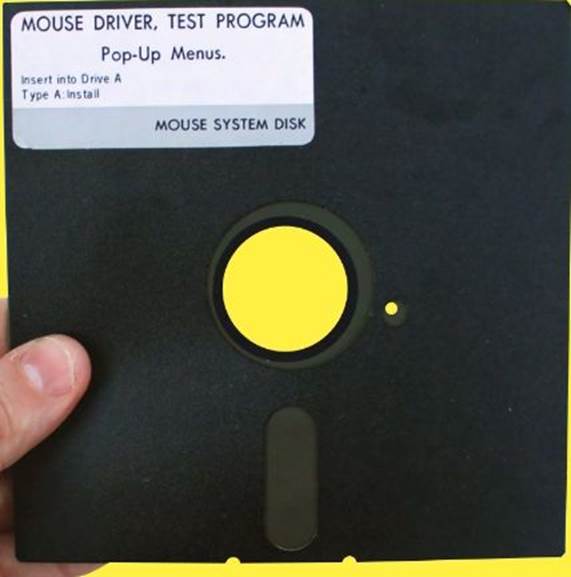 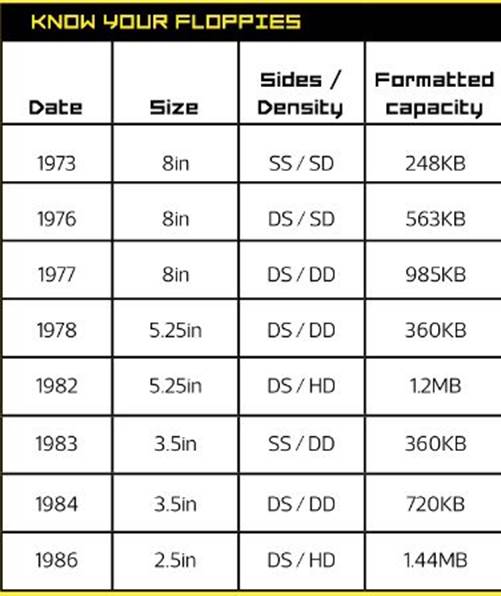 In my case, I only had one floppy drive in my first PC, but at least it was a 3.5in double-sided density (DS/DD) one, which meant the disks had a reasonable amount of storage space compared to 360KB 5.25in floppy disks (the other main PC standard at the time). The big adventure games would arrive in large boxes containing multiple floppy disks, and with no hard drive, you would have to swap over disks regularly. But floppy disks were cheap. I could buy a couple of with my pocket money and you got disks of demos free with PC magazines.

It took a long time for the floppy disk to completely die out. Even when DVD writers and USB thumb drives were mainstream, floppy drives could still be useful for low-level computing tasks, such as flashing your motherboard BIOS or installing RAID drivers before a Windows installation.

There were also attempts to keep the format alive with the ‘SuperDisk’ drive in the late 1990s, with capacities of 120MB and later 240MB, along with backwards compatibility with older 3.5in drives. But eventually, capacious and speedy flash drives, as well as cloud storage, killed them off. Floppy disks were revolutionary compared with the storage methods that preceded them, but they were also notoriously unreliable, slow and noisy

You risked losing all your data if you got them near a magnet, or accidentally creased a 5.25in disk’s packaging. The last motherboard I remember coming with an MFM floppy drive controller was ASRock’s Z77 Extreme6 in 2012, although you can still buy USB 3.5in floppy drives today, as well as adaptors to control old 5.25in floppy drives via a USB port. I still have a box of my old DS/DD floppy disks, a reminder of where so much of my pocket money went when that was my only storage option.