First things first: if you’re looking for a quick-and-easy flight simulator. FlightGear isn’t for you. Make no mistake, this is a serious simulator that takes time to master.

It’s also open source, which means the program is passionately updated by an army of volunteers. While it’s not as polished as paid-for alternatives such as X-Plane (www.x-plane.com). it makes up for this in detail and realism.

With over 20.000 airports and hundreds of aircraft to choose from (from the double-decker Airbus A380 through to gliders and even a Zeppelin), deciding where to start is your first challenge.

Select a Boeing 747, for example, and you get a feeling for just how daunting it would be to sit behind the controls of a real jumbo jet, with a seemingly endless array of switches, dials and buttons to bamboozle you.

Happily, there’s plenty of help at hand. If the sizeable manual leaves you overwhelmed, try the online forum (https://forum.flightgear.org), where the enthusiasts who develop FlightGear offer advice to those just starting out.

And it’s worth the effort. You can’t beat hearing the engines fire up and seeing your plane thunder down the runway, even if it does veer off course and head for the control tower.

Being open source, FlightGear is constantly updated. The 2018.2.2 version brings with it improvements to joystick control and updates to aircraft, including the North American P-51 Mustang and Cessna 172P.

While the graphics aren’t exactly cutting edge, the sheer attention to detail in FlightGear is astounding. Prepare to be enthralled and frustrated in equal measure as you battle complex controls and the odd glitch (such as misbehaving drop-down menus), before finally taking to the skies. 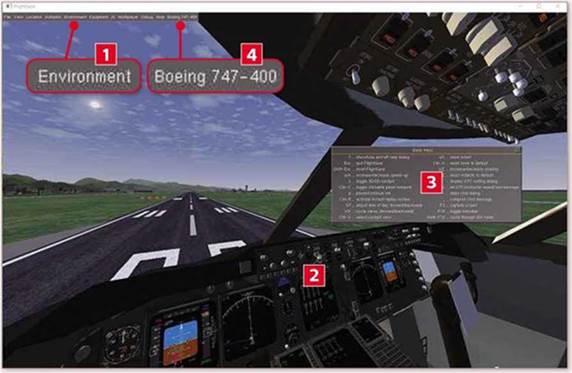 1 The Environment menu lets you change settings such as the time of day, weather and location at any point during your flight. If you’re feeling adventurous, you can turn volcanic activity on.

2 These complex controls aren’t just for show. You’ll need to spend time working out exactly what each one does if you want to avoid plummeting from the sky, or even just get off the ground.

3 New pilots will appreciate the pop-up windows that act as quick-reference guides to some of the most common controls, but you’ll still need to spend time reading through the many online help articles.

4 Access aircraft-specific controls via this menu. With the Boeing 747-400, this includes changing the livery of the plane, simulating engine fires and a useful Autostart control to get the plane up and running.