If you are looking for a new antivirus program, this one should be on your shortlist. Roland Waddilove checks out the latest version 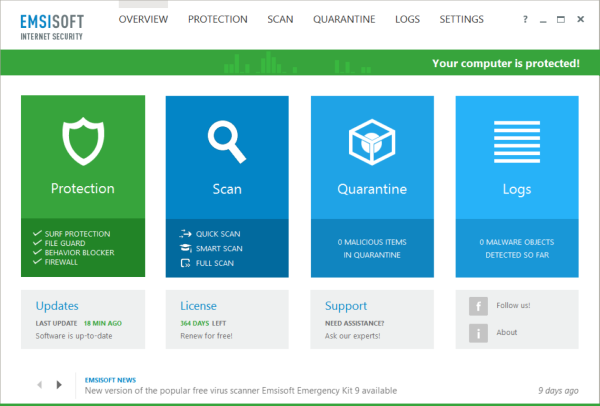 The interface is mostly unchanged from last time, but the scanning and detection has improved

Emsisoft Anti-Malware is a lightweight antivirus program for people that do not need a full security suite with all the bells and whistles. It provides a basic level of protection against viruses, spyware and other types of malware, web protection, and a behaviour blocker. There are additional discounts for two or three year licenses.

The software looks the same as it did last year, but there have been changes below the surface to improve the performance and protection. Anti-Malware now detects zombies. Not The Walking Dead variety, but the hijacking host processes to load malicious code kind.

Ransomware has become increasingly common, where malware encrypts the disk until you hand over a huge sum of money to thieves. This latest AntiMalware is better at detecting and blocking ransomware activities. It is quieter than previous versions and will often deal with malware without asking you what to do. It just does it.

One change worth mentioning is that support for Windows XP has been dropped and AntiMalware needs at least Windows 7 with service pack 1. There aren’t many XP users left, but if you are one then you must look elsewhere for protection.

The interface is plain and simple. There are four tiles consisting of Protection, Scan, Quarantine and Logs. The Scan screen is a bit confusing, though, as there are Quick Scan, Malware Scan and Custom Scan options. Don’t they all check for malware? A Malware Scan is basically just a full scan. Custom scans can be created and you can set various options, such as searching for PUPs, scanning for rootkits, and so on. There is a useful option to use direct disk access, which is a better, but slower way to access the disk and find rootkits. 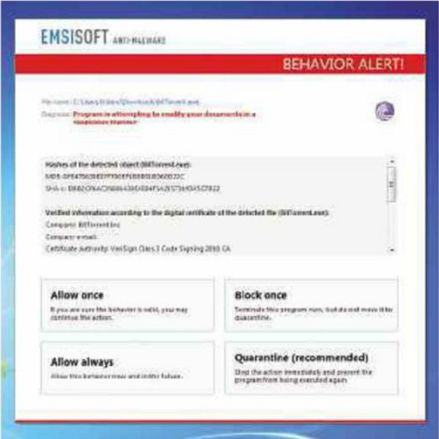 If malware is detected, Anti-Malware can send you an email, which is useful if you install it on other computers, such as other PCs in the home or office. It automatically allows programs with a good reputation and blocks those with bad ones. The File Guard component can be customized and there are three settings, fast, balanced  and thorough. You can choose what to do with PUPs (potentially unwanted programs), such as alert or silently quarantine.

Web browsing checks look for hosts known for phishing, malware and PUPs. There are four options: allow, block, notify or carry on silently. Websites can be blacklisted, but it is hard to see the benefit.

Emsisoft Anti-Malware performed quite well in AV-Comparatives real-world protection tests in October 2015. It beat Lavasoft, McAfee, Bullguard, Avast, ThreatTrack Vipre, but it wasn’t as good as Kaspersky or Trend Micro. It is a good security program, but it is not the best. Anti-Malware is available with a firewall for an extra £15 as Emsisoft Internet Security and it is free without real-time protection in the form of Emsisoft Emergency Kit, which is useful for scanning and cleaning up an infected PC. It is a competent anti-virus program, priced similarly to rivals and the performance is reasonably good.

It’s not too expensive and performs quite well. It’s worth considering.

It’s not too expensive and performs quite well. It’s worth considering.