Multichannel power amps are expensive, right? Emotiva is changing that with its A-700, says Ed Selley. Read our EMOTIVA BASX A-700 Review. 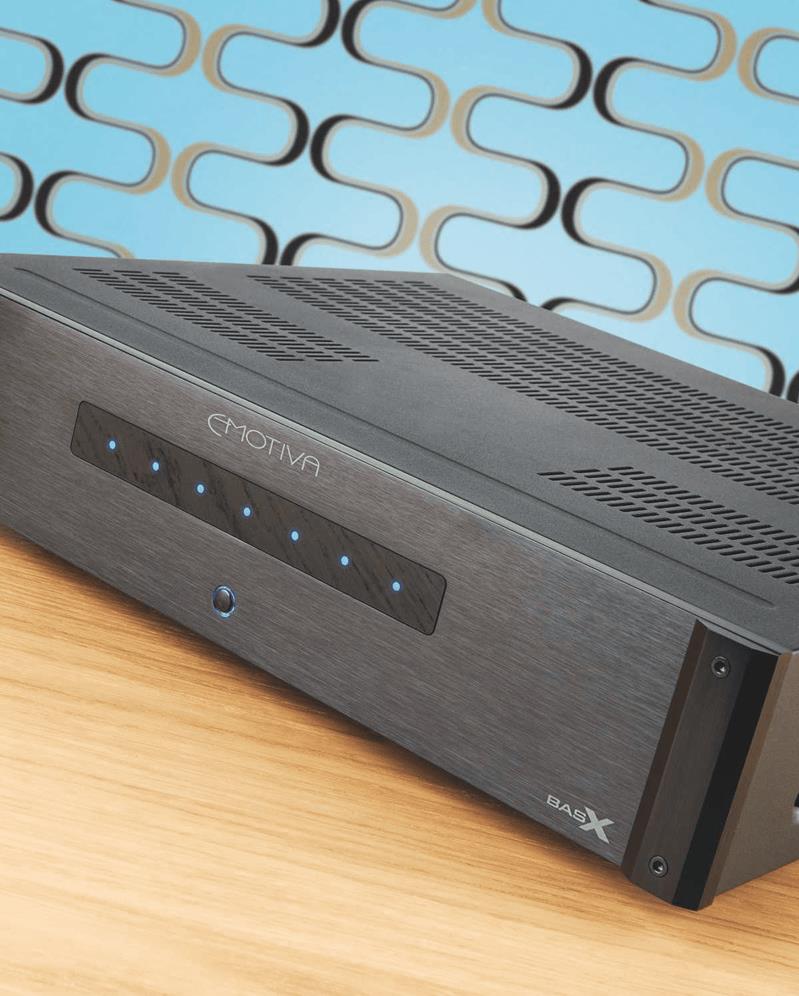 In the last few years, the one-box AVR has almost completely replaced the more specialist processor/power amp combination at all but the loftiest price points. The greater convenience of a single chassis and the increase in capability that we’ve seen at various price levels has squeezed out the double-device concept. In processing terms, there is little to stop a one-box unit matching a dedicated processor, but in the case of dedicated multi channel power amps, there’s more debate.

The reason for this is simple enough. With the squeeze being put on manufacturers to give us more features at each price point and more channels of amplification being required for newfangled sound formats, the strain on that amplification becomes more severe. While an AV receiver might specify that it has seven, nine or even eleven channels of, say, 100W amplification, this will drop considerably when all the channels – or even just a few of them – are under load, driving speakers. This is where the Emotiva A-700 comes in.

As a dedicated seven-channel power amplifier, the headline figure of 110W per channel is not significantly – or indeed any – better to that claimed by many AV receivers. Where the Emotiva differs is that as well as this figure – which claims a 0.1% THD and is measured with the amp in stereo mode – it also boasts a claimed power output of 80W into 8 ohms with all seven channels in play, again with a low distortion. This is a healthy spec and comfortably in line with that offered by high-ticket AV receivers. And the A-700 costs an inviting .

With a demanding set of speakers, there is a good chance that this standalone power amplifier will deliver a better performance than some significantly more expensive integrated AVRs. As such, while there is a matching processor for it (the 4K-capable, seven-channel BasX MC-700), the A-700 potentially makes sense as an upgrade for an existing receiver. You could, for instance, employ it to take over responsibilities for your main surround bed, leaving your AVR to handle any height channels/second zone speakers you might have.

Emotiva, as a brand, is perhaps unfamiliar. The company hails from Tennessee in the US but, unlike some American marques, has the ambition of creating home cinema audio hardware for the less well-heeled, or ‘high performance products at prices that more people could afford and enjoy,’ as Emotiva puts it. A new distribution deal with UK specialist Karma AV (which also handles the likes of SVS, JBL Synthesis and GoldenEar) has seen the A-700, and the brand’s more premium X Series components, arrive at UK retailers, and onto my test bench.

The engineering that has gone into the A-700 isn’t the last word in radical thinking. Yet, in many ways the results are the better for it. The amplification itself is class A/B rather than Class D, and this means that a significant chunk of the internal volume is given over to a hefty toroidal transformer. This supplies enough power to ensure that four ohm loads are also handled effectively.

The internal layout of the A-700 is logical to a fault. Each channel of amplification is discrete and a large internal heat-sink serves to divide the output stages from the power supply. There are two cooling fans inside the A-700 but nothing I’ve done in the time I’ve been using it has caused them to be audible, if indeed they have even switched on.

The exterior is prosaic but relatively well assembled.

I really like the seven blue indicators that show the status of each amplifier channel, meaning at a glance you can tell if everything is (or isn’t) functioning normally. And Emotiva has been quite clever in that it has channelled its design skills and costlier materials into the front panel – which will be your main point of interaction with the amp – and used this to mask that the rest of the A-700, while perfectly respectable for the asking price, is nothing to get too excited about.

Above a five- channel BasX model, below an eight-channel multi zone model

The rear panel offers plenty of space around connectors and speaker terminals feel solid if not spectacular. Emotiva has fitted the A-700 with a 12V trigger system (and supplied a cable to use with it) that should allow you to turn it on and off at the same time as your AVR/processor.

I used the A-700 with my regular Yamaha RX-A3040 receiver, via the latter’s preouts. Straight away, with a quintet of Elipson satellite speakers, the power amp immediately demonstrated that it had more gain at any given volume increment than the internal amplifiers of the Yamaha. And there is more to the A-700’s positive attributes than raw volume. Reaching for a firm ‘guilty pleasure’ BD in the form of Troll Hunter, the Emotiva proved superb at responding to dynamic shifts in the soundtrack as the brooding Norwegian forests suddenly came alive with the wide selection of noises the trolls make. This ability to effortlessly relay major dynamic swings is something that really helps movie sound mixes convince.

The tonality is consistently accurate and believable.

The way that the A-700 delivers the more grounded sound effects of F1 drama Rush (Blu-ray) is one that is natural and unforced. Engines sizzle with carefully rendered detail and Chris Hemsworth’s affected (and pretty convincing) take on James Hunt’s drawl has the weight and separation from the rest of the soundtrack to remain intelligible at all times. In fact, the A-700 is a bit of a champ in this particular regard – now matter what the movie, everything is clear and easy to follow.

It is important to put the abilities of this affordable amp in a degree of context. I’d suggest it is likely to improve the performance of pretty much any AV receiver up to about the ,000 price point; it certainly did with my Yamaha. It isn’t a way to ‘cheat’ your way into securing the performance of a seriously high-end multichannel amp, though – it lacks some of the spaciousness and real power of Parasound’s Halo line [HCC #240] or NAD’s M27 [HCC #255]. This should not be too surprising, given the price point.

Of course, five compact and easy-to-drive satellites aren’t going to be the sternest challenge that Emotiva’s amp is likely to face. With this in mind, I assembled a slightly random collection of speakers in the form of two Neat Acoustics Momentum floorstanders, a Neat IOTA as a centre and a pair of Acoustic Energy AE1 Classic standmounts as rears. This quintet promises low sensitivity, periodically challenging impedance and the sort of current

requirements that would be a challenge for most AVRs… and the Emotiva doesn’t break sweat at any stage.

The hysterically loud lightcycle battle in Tron: Legacy (BD) comes through without any strain or compression, and the same ability to pull detail out of the mix and make it apparent is once again impressive. You’re unlikely to find a set of speakers below a few thousand pounds that this amp can’t handle.

The A-700 is no doubt unusual in the modern home cinema era – a low-cost power amp at a time when low-cost processors are rare and many AVRs are eschewing preouts altogether.

But it might well fit your requirements. For those with 3D audio systems, adding the A-700 to an AV receiver with good-quality decoding – and this need not be at the flagship level – will allow you to choose your main speakers with impunity and enjoy a deeply impressive performance while the AVR fills in the height channels. So while it might seem like a throwback to an earlier era, perhaps the A-700 is bang up-to-date.

The Emotiva offers fuss-free power (although it's not a monster amp) and deeply impressive audio performance at a bargain price.

2. Hook your AVR/ processor to the A-700’s phono inputs, connect speakers, and away you go…

A candidate to feed the A-700 is Emotiva’s affordable (not Atmos/DTS:X) processor. Features here are HDCP 2.2-equipped HDMI in/ outs, Emo-Q auto-calibration, balanced sub outputs and parametric EQ.