My name is Jane and I am a BitTorrent user. OK, you can unclutch your pearls, I haven’t turned to the dark side. I’m not downloading pirated copies of Photoshop and Game of Thrones. Instead, I’m feasting on silent movies and MS-DOS programs that wouldn’t know a licensing restriction if they sat on one, and I’m using the maligned torrent network to do it.

The Internet Archive recommends torrents for downloading, and I trust it almost as much as I trust Blue Peter

Why? Because The Internet Archive (https://archive.org) recommends torrents (BitTorrent is the official term) for downloading (see screenshot), and I trust The Internet Archive almost as much as I trust Blue Peter. This online trove of digital treasure spans everything from Tamagotchi for Windows 3.1 to the original audio recording of Prokofiev’s Peter and the Wolf, all free to download and free of copyright. Among the download links for all these goodies you’ll see ‘TORRENT’.

The Archive likes torrents because they’re faster than HTTP and use many times less bandwidth. You can set dozens of torrents to download simultaneously while you carry on streaming last week’s Countryfile, and you won’t notice the slightest blip in your broadband. The Government uses torrents to distribute huge public files without bringing down the entire broadband network. NASA, 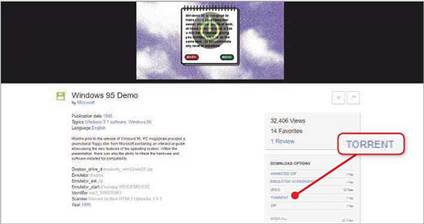 Linux, Madonna and even Auntie Beeb have used BitTorrent to distribute stuff, with a free Capaldi-era Doctor Who box set getting its official release through online platform BitTorrent Now (https://now.bt.co).

But BitTorrent happens to be popular with copyright-thieving scumbags, and that association has long put me off using it. I’ve also been deterred by the need to install torrent client software, which is a notorious minefield of junk. I went for free client program uTorrent (www.utorrent.com) because it’s small and easy to use, and sure enough the junk was out in force. I’m still high on adrenaline after surviving the installer (long story short: don’t click Finish Installation).

Next step was to download torrent (‘.torrent’) files for opening in uTorrent. This triggers the target media file (film, program, whatever) to begin trickling on to your PC, byte by byte, via the BitTorrent peer-to-peer network.

Many old programs, by their nature, aren’t compatible with Windows 10 and need to be run in an emulator, much like the BBC Micro games featured. One ZIP refused to open at all (Windows declared it ‘invalid’).

That 4.4GB Brazil video file took less time to emerge than my kettle takes to boil, but there was a moment of panic when I noticed its torrent had begun seeding. ‘Seeding’ means the file has finished downloading and you’re now contributing its data to the peer-to-peer network. If the material was copyrighted, that would make you a pirate. I didn’t want to take the chance, even though the file was distributed via the Internet Archive. Worth bearing in mind.