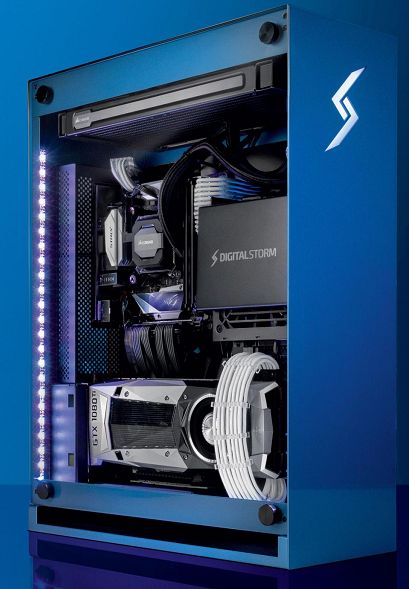 The Bolt X isn’t the smallest “small form factor” PC, but it sure packs a wallop.

Measuring 15.5 x 6 x 20 inches, and weighing up to 30lb, the Bolt X is only an inch or two smaller than many mid-tower cases, and massive compared to super- compact systems, such as the Corsair One. We wouldn’t call it small judging solely from the exterior, but things are different once you look inside. The most impressive achievement of the Bolt X’s size is its slimness—at only six inches wide, some finesse is required to fit all the components soundly. That includes a vertical alignment of the graphics card, connected to the mobo by a long ribbon cable.

Speaking of that GPU, it sure is a doozy. The Bolt X is one helluva gaming machine, rocking a single GTX 1080 Ti for pixel-pushing power. It doesn’t pack the same punch as crazy high-end dual-GPU builds, but there’s also no SLI to worry about. The single GTX 1080 Ti is a powerhouse on its own, pairing nicely with Intel’s new i7- 8700K Coffee Lake CPU. Both are slotted (the GPU remotely, as we mentioned) into an Asus ROG Strix Z370-I motherboard that also sports 32 gigs of DDR4-3000 RAM.

The first thing we noticed when firing up the Bolt X: Wow, this thing is loud. The CPU fan, a Corsair H115i 280mm Liquid CPU Cooler, was whirring loudly at idle, kicking up to a roar at even the slightest hint of load. The problem was quickly sorted, though, with a tweak to the fan control profile in Corsair Link. Without much ado, the Bolt X was purring along quietly.

So, what kind of power does this compact system pack? Quite a bit. The GTX 1080 Ti crushed our 1080p gaming benchmarks, averaging 167 fps in Rise of the Tomb Raider, 104fps in Total War: Warhammer II, and 74fps in the super-demanding Ghost Recon: Wildlands. Those are largely overkill numbers, though, and we wager most users won’t be saddling a system (yep, the Bolt X is pricey) with a 1080p screen. 1440p is a much more logical companion, and the 1080 Ti performs admirably in that slot.

Rise of the Tomb Raider’s three-part benchmark served no issue, with the Bolt X scoring 145 fps in the Mountain Pass, 110 fps in Syria, and 106fps in the Geothermal Valley—an average of 121 fps; perfect for a high refresh rate 1440p monitor such as the Asus ROG Swift PG279Q or the Acer Predator XB271HU. Total War: Warhammer II’s Battle benchmark proved a bit more demanding, but with a score of 74 fps, the Bolt X still survived unscathed. The only benchmark to dip below the coveted 60fps line was Ghost Recon: Wildlands— but just barely. A score of 59fps there is nothing to scoff at, as that game’s Ultra graphics preset brings even the most impressive systems to their knees.

Small or not, the Bolt X brings the might of a full-size gaming powerhouse. And while pricey, it’s not nearly as extravagant as some of the pre-builts that have graced these pages. Throw in Digital Storm’s top- notch build quality, metallic paint finish, custom cable-sleeving, and did we mention the built-in software-controlled RGB light show? X marks the spot, -bo moore