A customised Linux-based media streamer with some interesting features

Just when you thought CD ripping had gone the way of the dinosaur, along comes a device that manages to combine it with network audio streaming. 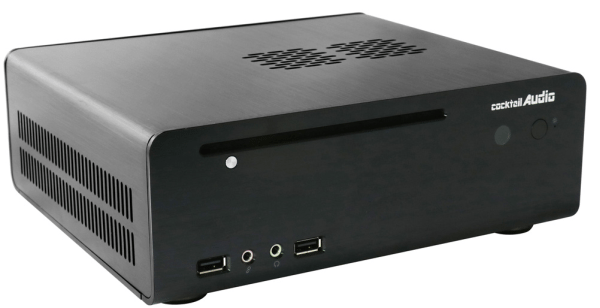 The Cocktail Audio Pro X100 is an interesting marriage of technologies. It’s a compact unit measuring just 204 x 240 x 80mm, and it looks similar to the previous generation of Shuttle media cases.

Within its black chassis lies a 2GHz Intel Trial-D quad-core processor and 4GB of DDR3 memory. On its 1TB hard drive, you’ll find a copy of Fedora 22 running in console mode, with a selection of pre-installed audio apps, Samba and a selection of other networking media programs.

The front is dominated by a slim DVD optical drive, a pair of USB 2.0 ports, and headphone and microphone jacks.

The rear of the device features a further three USB 2.0 ports, a single USB 3.0 port, gigabit Ethernet, another two headphone and microphone ports, an optical port, HDMI and the power input.

How the X100 works is really very simple. All you do is hook the unit up to your network, and from any modern browser you access the web landing page to launch the various installed apps or configure the X100’s settings.

Since it’s Linux based, there are a lot of possible extras you can install on top of what Cocktail has already included.

To begin with, you’ll find the likes of Squeezelite, SqueezeBox Server and a CD import function, as well as a software manager where you can install Plex, BubbleUPnP and so on.

The settings also allow you to attach to a local NAS drive or a shared folder where your music collection already resides. You can, of course, opt to copy everything over to the X100, or you could simply use it as a hub for all your music. And as well as music streaming, you can also add videos and other media types or use the X100 as a backup device.

Beyond the web front-end, by attaching the X100 to a monitor via the HDMI port, you’ll get access to the core Fedora OS. You can fiddle around with the OS to your heart’s content, but generally speaking it’s probably best you leave the back-end operating system alone – unless you know what you’re doing and have the technical ability to alter the OS.

The main CD importer function works well. The CDs are automatically ripped and encoded to FLAC as soon as they’re inserted, along with the X100 retrieving the album art and metadata. Once the content has been stored on the X100’s internal drive, you can then access it from any LAN connected device and begin playing the media. Or you could play it via the X100’s optical port if it’s hooked up to your speaker setup.

The overall build quality and design of the Cocktail Audio Pro X100 is impressive. Clearly a lot of thought went into making it easy to use, while offering a simple way of digitising your CD collection.

It’s not priced too high either; the 1TB model. That said, confident Linux users could assemble something similar for less.