Having covered BT-branded gear recently, I’ve come to the conclusion that it avoids the bleeding edge of technology, because that invariably generates support problems. That reluctance, in a nutshell, defines this relatively inexpensive wifi Extender. 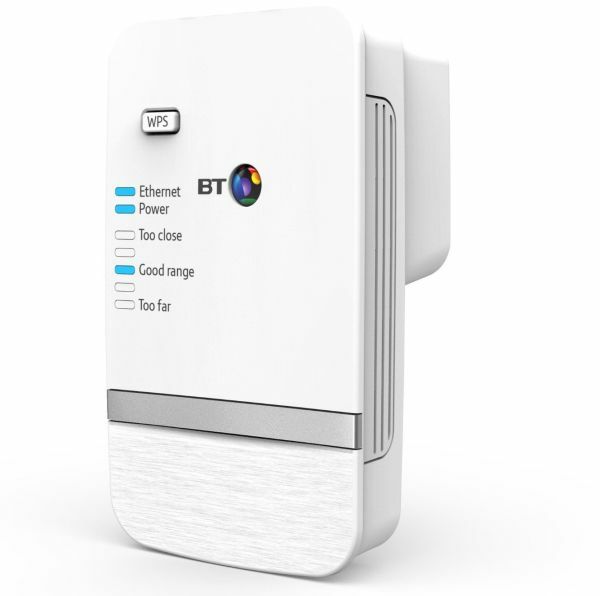 At this price, the 610 was never going to be ‘ac’ technology, though frankly dual channel ‘n’ is probably more useful to most people. What always impressed me immediately on unpacking this is how nicely BT kit is made. This uses very high quality tooling to produce a really distinctive look; styled in common with the Home Hub 4 and 5 by continuing the metal band motif, this time on white plastic. On the practical side, the unit is designed to be plugged into a UK mains socket, and has on the front a WPS button and a myriad of lights, and on top an Ethernet socket, reset hole and On/Off switch.

As it is meant to be deployed by the less technically minded, the instructions direct the purchaser to use WPS as the means of connecting the router. In theory, you simply plug it in near the router, wait for it to start a flashing light sequence and then push the WPS button on the router and then on the 610. Once the lights tell you that it’s established a link, you can unplug it and deploy it to the best location for your building. That’s where, I suspect people run into problems, because wireless connections aren’t remotely as bankable as those with wires. BT tried to help with LEDs that indicate if the 610 is, ‘too close’, ‘too far’ or is at a ‘good range’, using some kind of Goldilocks logic; except wi-fi can be remarkably fickle and, when your neighbour overlaps existing wifi channels or your house is made with metal mesh in the walls, all manner of weirdness can transpire.

When operational the extender takes the existing SSID of the router and adds EXT2 and EXT5 to the front of it for the two channels. You can use the same password as the host router to access these, or the one printed on the rear of the 610.

Personally, I had no issues configuring the 610 in this way, but it’s easy to imagine many scenarios where it might not go as smoothly. One issue is that you might not have a WPS button on your router. There is a means to manually configure using a downloadable software tool from BT, however. Or rather that’s what they tell you to use, but it actually just finds the IP and then opens a web location for you to access the advanced controls.

Using these you can give the extender any SSID you like and also change the passwords you use to access them – and you can also give it the same name for both channels. The cart-and-horse scenario here is that you need to get it working with the router before you can generally get this to work to make the changes.

The truth is, however, that I have sympathy for BT, and other wifi hardware makers. As simple as they try to make whole set up procedure, there will invariably be wrinkles that only some technical knowledge can smooth out. That’s just the nature of the technology and the wide variety of situations it can, and inevitably will, be deployed in.

One oddity I noticed, though, was that the 610 only uses the 2.4GHz channel for the backhaul, somewhat capping the performance for uploads. However, if they’d not done this then the range of the device would have been severely compromised, because 5GHz isn’t as adept at dealing with extended distances.

I’ve got a complaint, however, but it’s a minor one: while the system will show you the MAC address of connected systems there isn’t any means to filter based on this credential. You can disable the WPS button, though, for those who don’t like guests who assume they can just connect to your network whenever they come around.

As balance, in the ‘liked’ column I’d like to make note of the power management technology, which uses a maximum of 5.8W when in operation and drops to 2.7W when standby becomes active five minutes after it was last accessed.

I’m aware that some people have had real problems with this hardware’s predecessor, so I’m reticent about giving it a massive thumbs-up. My experience was largely a good one, though, with it doing exactly what BT promised. If you can follow some basic instructions and don’t have the home from wi-fi hell then this equipment should work fine.

The problem with wireless comms is there aren’t any guarantees, I’ve concluded.

A simple and cheap means to extend your wi-fi network; providing the foibles of wi-fi don’t mess things up.