Even the most cursory glance will tell you that the Netgear Nighthawk AC1900 is no ordinary wireless extender. For a start, it looks more like a router, with a 252 x 174mm footprint and three sizeable antennas sticking out at the back. You can use it in its horizontal orientation or place it vertically on the supplied stand, but either way it’s a formidable piece of networking kit, with a distinctive, angular design. 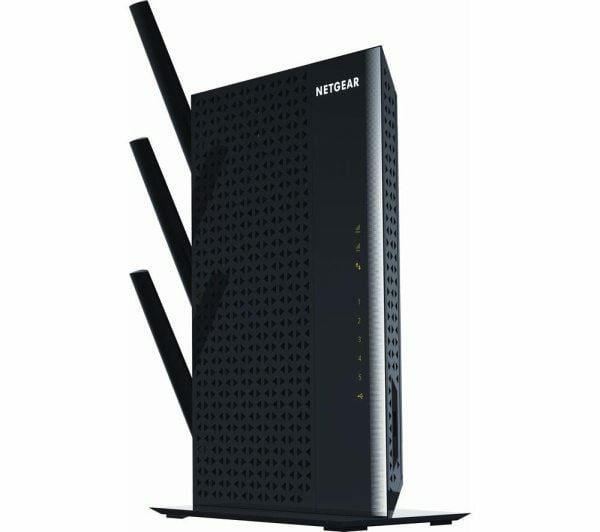 What’s more, that design has been thought through. The single USB 3 port is accessible at the front, with five Gigabit Ethernet ports around the back. Admittedly, it’s a little odd that the WPS button is smaller than the power button and located on the rear, but you’ll need it only when adding new devices to the network.To call the Nighthawk AC1900 Extender (model number EX7000) highly specified would be an understatement. For a start, it supports the high-end AC1900 variant of 802.11ac, giving you up to 1,300Mbits/sec of bandwidth on the 5GHz band and up to 600Mbits/sec on the 2.4GHz band, provided you have a TurboQAM-compatible wireless adapter with a 3×3 antenna array. These are still in short supply, however, with only PCI Express desktop cards available at the time of writing. The antennas are also SmartBeam-compliant, so the extender can focus its available power for additional speed at longer range.

Then we come to the features. A single USB 3 port supports printers and external hard disks, with the option to use the Nighthawk AC1900 as a DLNA-compliant media server. Gigabit Ethernet allows you to connect smart TVs, media streamers, NAS drives and games consoles to the extender and make the most of its connection speeds. You can use the extender as an access point, replacing your existing wireless network, and the configuration options even stretch to such advanced features as parental controls.Setup is almost flawless, with a well-designed, easy-to-follow wizard that guides you through finding your existing networks, and building and securing the 2.4GHz and 5GHz extended networks. Our only complaint, and it’s a minor one, is that you’re forced to sign up with an email address and password – an unnecessary step for a hardware installation.

Positioning the router is also very easy. Both the 5GHz and 2.4GHz bands get their own small signal-strength meter, and you can plug in the Nighthawk AC1900 and move it around until you achieve acceptable levels. One advantage of this extender’s sheer power is that it’s much less fussy about placement than some of its rivals. Move it further away from your router and it still holds a stable link.Performance is exceptionally good. Even on the 2.4GHz band we hit speeds of 12.8MB/sec in our mid-range tests, with that increasing to 17.9MB/sec and a storming 20.1MB/sec with 5GHz 802.11n and 802.11ac connections. And while these speeds fell in our long-range tests, they were still acceptable and ahead of any rival extenders.What’s more, the Nighthawk AC1900 was the only extender to get a stable signal down to a remote outside office on our premises, maintaining a speed of 5.2MB/sec. Frankly, it’s wasted on simply stretching a wireless network to the back garden, but if that’s what you want, it’s more than capable of the job. Just be aware that its full 802.11ac speeds still only really apply at close to medium range. On the same floor as our router, across 8m of distance and through two brick walls, we could transfer files at a speed of 25.6MB/sec; not as fast as a direct connection to the router (29MB/sec), but not far behind.

What should I replace my EE router with?

I have fibre broadband from EE, giving me 27Mbps in my house and 14Mbps in my garden using EE’s Bright Box 2 Wi-Fi router (pictured). These are acceptable speeds, but if I wanted to replace the Bright Box 2, am I correct in thinking that I need an ADSL router? The TP Link Archer C3200 you’ve recommended seems to be only for cable broadband.

EE’s cheapest fibre option averages 36Mbps, so 27Mbps suggests the Bright Box 2’s Wi-Fi isn’t quite keeping up, and 14Mbps could certainly be improved. For fibre you need a VDSL modem, which the C3200 lacks.

TP-Link’s AC2800 is much faster, but not great at long range, so if a long distance is the challenge, consider mesh routers instead. To get a new router online you’ll need to enter your original EE login details, even if you’ve changed them on the Bright Box 2.