Firefox loyalist Jonni Bidwell has a dalliance with an altogether different kind of web browser. Will he be able to look at himself in the mirror afterwards…? Read our Brave 1.17.3 Review

A free, privacy­centric web browser that blocks harmful adverts and rewards you (with tokens) for viewing non­harmful ones. Tokens can be used to support content, hopefully contributing to a better, healthier web. See also: Chromium degoogled, Firefox.

We’re big fans of Firefox here at LXF Towers. In a  world dominated by Chrome and Safari, it can more than hold its own while at the same time respect privacy and freedom. Combined with its containers (for isolating groups of websites) and uBlock origin, it makes the web much more palatable. But Firefox isn’t the only fruit, and the Chromium- based Brave browser has over its five-year lifespan attracted a considerable following. Brave is licenced under the permissive Mozilla Public License (MPL).

Brave Software is open source and we’re writing about the company because it has a Linux build, and a fine one at that. Installation is a simple matter of adding a repo (options are available for Debian derivatives, Fedora and openSUSE) or, if you want to embrace the future, fetching it from the Snap Store. On first run there’s a brief welcome tour, which offers to import settings and bookmarks from other browsers, explains how to disable its ad-blocker feature (in case sites don’t behave), gives you a choice of default search engines (use DuckDuckGo!) and asks you to enable Brave Rewards.

Turning on the Brave Rewards option will mean unintrusive ads will periodically appear. However, if you view enough of them you’ll be rewarded in cryptocurrency – Basic Attention Tokens (BAT) to be precise. These can be traded on many crypto exchanges, either for Bitcoin or hard currency, or you can use them to tip your favourite content creator (similar to how Steemit and LBRY work). You can also donate BAT directly to your oft-visited Reddit, Twitter and GitHub contributors. Brave also has its own crypto wallets, so you can manage your BAT, ETH or BTC from the comfort of your browser.

Nobody likes ads, but they’re unfortunately central to today’s revenue models, so we’d rather see ones that directly fund creators and projects rather than horrible advertising networks. Brave uses its own Privacy­Preserving Product Analytics (P3A) to target ads and avoid the tracking associated with other services. Brave’s ad network returns 70 per cent of its revenue to users, so this is anything but a money grab. It seems a little cheeky to block a webpage’s own ads only to run your own, but we like cheeky. 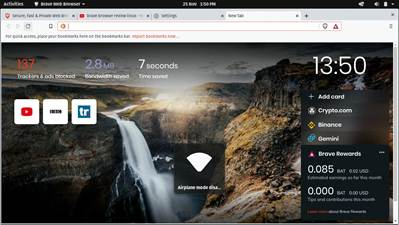 Brave’s home screen shows you how many ads you’ve been spared, your BAT earnings, and a pretty backdrop to boot.

that required the adblocker to be disabled. Even our sister site and ad haven TechRadar didn’t bat (no pun intended) an eyelid.

The ad-blocking engine is written in Rust and hardware acceleration is enabled by default. If you browse to brave://gpu you can see what features are enabled. We were pleased to see that installing Brave on our Pop-powered Dell XPS 13 gave us WebGL2 rendering out of the box. To get accelerated video decoding to work we had to enable an experimental flag, but then it worked just fine.

Besides privacy from advertising, Brave also offers privacy from snoopers in the form of a built-in Tor Browser. Brave Software has its own onion site, and when you browse https://brave.com the address bar gives you the option to instead open the Tor site. You can only browse Tor in a private window, which makes sense security-wise. There are a number of nice touches that make Brave stand out, such as it giving you the option to open a page using the Wayback Machine when a 404 not found error is encountered.

Brave really is a better browser, even if you don’t care about its rewards program. Well worth your basic attentions.