If you haven’t heard of the Bookeen Cybook Ocean before, then you’re not alone, because we certainly hadn’t either. However, it’s quite a popular e-reader in its native France, and it does offer something a little different from the other e-readers we have on test. 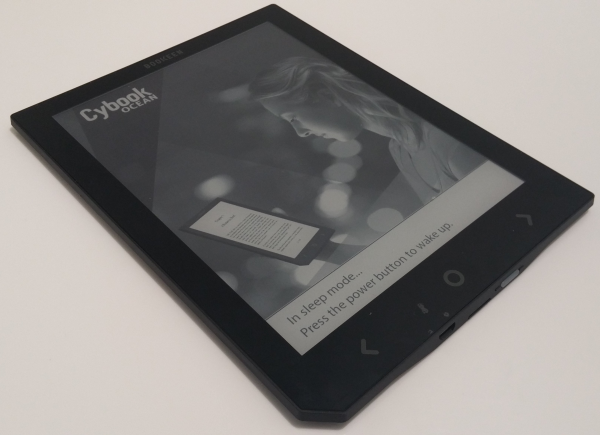 The Cybook Ocean is a monster of an e-reader, the huge 8″ e-ink screen dominating the device and making it feel more like a tablet than most e-readers. But the 1024 x 758 display with its pixel density of 160dpi and 16-level grayscale isn’t too shabby.

It measures 196 x 150 x 7mm, which is a surprisingly thin device to hold in your hand, and it’s relatively light, weighing a modest 300g. While that’s still heavier than the Kindle and Kobo H20, for example, it’s not as heavy as a similar sized tablet.

In terms of performance, the Cybook Ocean performs pretty poorly. We suspect that although it has a good enough Cortex A8 800MHz processor inside, there’s something added to the operating system that makes it drag its heels when navigating through the various menus, starting up and so on. It’s worth noting, though, that reading is fine.

While it’s thin, holding it does feel very awkward over longer periods. If, like us, you tend to read before going to sleep, holding the Cybook Ocean while lying down with a pinch-grip with a couple of fingers can get tiring very quickly.

As for the battery, Bookeen says it should for a month, based on half an hour of reading every day. We didn’t have it that long, but in the short time we have, its still only used about 5% of the battery charge.

Sadly, actually reading something is a bit of a chore. To purchase a book, you’re taken through an account setup that’s in French – understandably since it is a French product. Even though the user interface can be set to English, it somehow reverts back to French for the account details. Incidentally, it also reverts back to French for a couple of other menu choices too.

Obviously, you can use your own ePub, PDF and FB2 formats, among a few others, so although the setup may well be in another language, you can get reading if you have the content already to hand.

The other aspect that will most likely cause a problem is that the Cybook Ocean is currently only available through the Bookeen site, where you’ll need to convert from euros to pounds, which in this case comes to around £125, at the time of writing.

Although buying directly from the manufacturer is fine, it’s not something everyone wants to do, and there’s no sign of the Ocean ever being made available on the high street or virtual shelves in the UK.

To conclude, then, although it’s an okay e-reader, the Bookeen Cybook Ocean just isn’t as good as some of the other e-readers this week. The Kindle, Kobo H20 and even the Nook are far better reading devices.