Small and nimble is not how Shashank Sharma describes himself, but in Austrumi he’s found a distribution that is exactly that…Read our Austrumi 3.8.3 Review.

A Slackware derivative that’s capable of being run entirely from memory.

Despite being less than 350MB in size, the distribution packs many useful everyday applications such as a browser, chat client, audio player, office suite, and even some games. See also: Porteus, another Slackware derivative, or try the Debian- based AntiX. 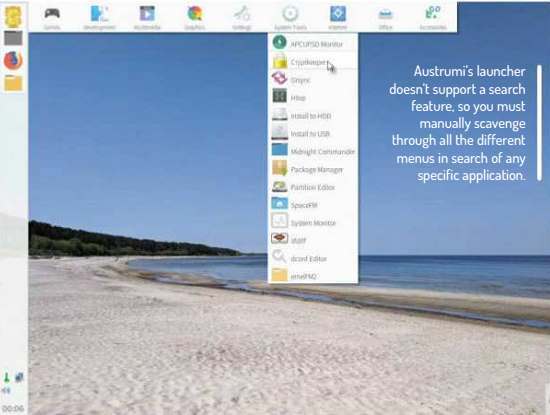 Qustrumi is a Live-installable Slackware -based distribution. Its default boot option is to run from RAM, and eject the CD. The second option is to not eject the CD. If you choose the first, you can pull out the CD drive or the USB stick as soon as you’re presented with the graphical desktop, because Austrumi can run entirely from your RAM. Even better, it only requires about 100MB RAM for optimum performance.

Unfortunately, the download link throws an error, so you must instead fetch the distribution using a torrent link from Linuxtracker.

Unlike most other Linux distributions. Austrumi requires no setup. Instead, it defaults to the Latvian language and boots straight into the desktop in almost no time at all. You must then fumble through the desktop to switch to English, or any of the other supported languages. To switch the language, click the button on the top-left of the screen, and navigate to the fifth button on the vertical strip showing the key and gear icon. Now click the last button on the vertical strip which says Voludys. You can now select your language from the window that opens. When you switch the language. Austrumi will automatically logout of the desktop, and you must login again. The password ‘austrumi’ works for the regular as well as the root user.

The distribution boots into an L-panel design desktop. The panel on the left of the desktop features only a handful of buttons. Except for the launcher at the top. and icons to launch Firefox, THE terminal and file manager, there’s only two other buttons: volume controller, and network preferences. Both are positioned at the bottom of the screen close to the clock.

The top button on the panel is the launcher. Clicking it reveals a horizontal strip of buttons such as Games. Development. Multimedia. Settings. Office and System Tools. When clicked, each button reveals an alphabetically sorted vertical list of comprising applications, tools and utilities. We’ve already used the Languages tool under Settings to switch to the English language.

Based on Slackware. the distribution also ships with the Gslapt package manager, but you must enable additional repositories from under Preferences if you wish to install additional applications. Despite no complaints while installing some established packages such as Kmahjongg and VLC, neither worked with Austrumi on account of missing dependencies.

Austrumi’s launcher doesn’t support a search Feature, so you must manually scavenge through all the different menus in search of any specific application.

While the distribution uses FVWM, it presents a range of customisation options. In addition to an automatically changing desktop wallpaper. Austrumi also features several different themes, such as the R-panel, U-gadgets and Windows. You can access these by right-clicking anywhere on the desktop and navigating to Themes. This is another area where Austrumi differs from its peers. Whereas other distributions rarely provide tools to protect your privacy or data. Austrumi takes care of both, with the inclusion of Cryptkeeper that you can use to create encrypted folders and Grsync backup utility.

For a list of all installed packages, you must launch Gslapt and switch the filter to Installed packages. A quick scroll through the list will give you an idea of all the myriad packages that make up Austrumi.

With its support for Intel and Nvidia graphics card, Austrumi is a well put-together distro and highly recommended, not just for low-spec machines but anyone looking for an alternative to their current installation.

Only a lack of documentation prevents us from giving this wonderfully fast absolute joy of a distro a near perfect score.

Features
9
Performance
10
Ease of use
8
Add your review