It’s based on Arch and is barely a year old, but don’t dismiss it as just another Arch-based distribution. Read our ArcoLinux 6.9.2 Review. 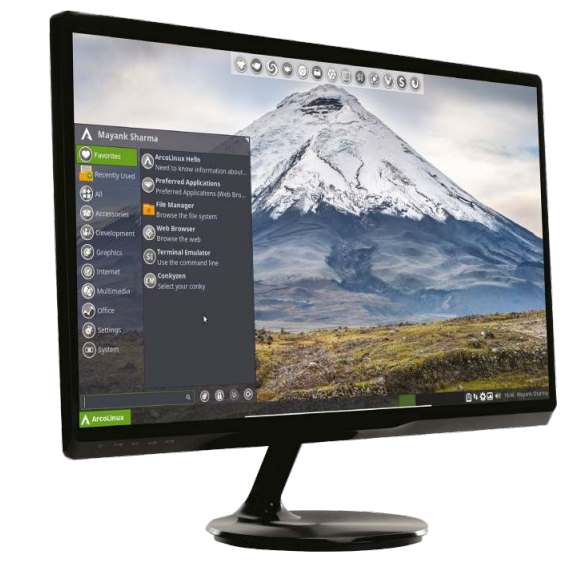 Above Once you’re comfortable with the distribution, begin your learning by first switching to Openbox and then to the tiling window manager i3

Graphics Depends on the desktop you install

RAM At least 4GB for an enjoyable experience

Licence GPL and others

ArcoLinux has had a busy first year. The distribution/project has gone through two name changes in order to better encapsulate its developers’ ever-growing vision. Unlike most distributions, ArcoLinux is pitched as a platform to learn Linux the Arch way. The lead developer has broken up the Linux learning process into six phases, and the three ArcoLinux distributions are part of those phrases. Interestingly, the final phase of the process is to create your own customised distribution on the mainline Arch install.

Of the project’s three releases, the main ArcoLinux release comes with three desktop environments, is chock full of productivity apps and is designed for the average desktop user. On the other end of the spectrum is the minimalist ArcoLinuxD release, which ships with just enough components to help you build your own custom ArcoLinux installation.

The third and newest option is called ArcoLinuxB. enabling you to modify the stock ArcoLinux ISO and build your own custom image. The project hosts a string of such customised ISOs as contributed by its community.

ArcoLinux recommends beginning your journey with the namesake distribution, which has just had its last release before the developers take some time off. The ISO weighs in at 2GB, which is a self-imposed ceiling by the developers. The Live environment boots into a customised Xfce desktop and straight away fires up the Calamares installer. You can safely exit it to experience the distribution before you anchor it to your disk.

that automatically grabs random wallpapers from desktoppr.co. In terms of apps. ArcoLinux has everything you’d expect from a mainstream desktop distribution and then some. Virtually all classes of apps have multiple options, including multiple browsers and multimedia players, plus several IDEs and advanced text editors. In fact besides Xfce, the distribution also includes the Openbox and i3 desktop environments. The one downside of this multiplicity is that the developers couldn’t fit in an office suite without going over the 2GB limit. You can of course easily pull one from the repositories. 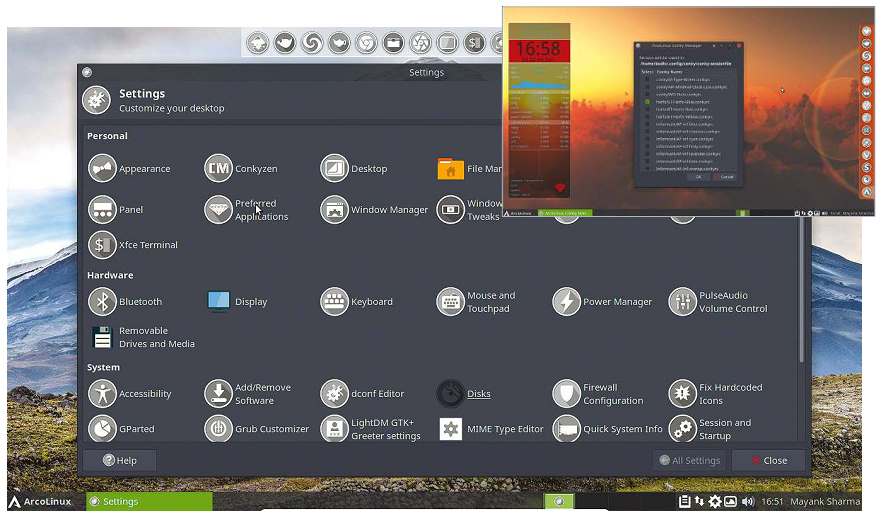 Above You’ll find tonnes of scripts on ArchoLinux’s GitHub page (https://github.com/arcolinuxb) to create your own custom ArcoLinux-based distribution

In terms of usability, the distribution is like any other Arch-based desktop. You can access Arch’s apps universe via the graphical pamac package manager, or the much-celebrated pacman command-line tool. The developers have spent a considerable amount of time building documentation around the project that will not only help you get things done in ArcoLinux but also closer to installing and maintaining a mainline Arch installation.

Choice is one of the distinct characteristics of ArcoLinux. The developers have added several configuration options in the Xfce Settings panel to help you further customise the desktop. You get loads of options to personalise various aspects of your installation’s appearance with custom themes and icons. They’ve also added oomox for customising themes and you also get conkyzen to apply all kinds of Conky applets on the desktop. There are some small but useful touches like the Fix Hardcoded Icons script, which applies the current theme to app icons that don’t adhere to the theme by default.

The distribution is nicely complemented by a diverse documentation infrastructure designed to help you skill-up from a Linux newbie to a full- fledged Arch user. ArcoLinux has multiple websites to cater to different aspects of the project, and its lead developer is a prolific YouTuber, with over 500 videos on how to get things done with the three different editions.

One point worth noting: though at first glance the websites look haphazardly arranged, they’re supposed to be navigated in a particular order, which does take some getting used to.

In addition to the engineering, the thought process that’s been put into the three distributions, along with the websites and the demonstration videos, is commendable. This helps it carve a niche as a user-friendly, compelling and customisable desktop distro.