We’ve been inundated with mini-PCs of late, with tiny towers packing SLI systems, shoeboxes that are VR ready, and now this relatively affordable PS4-sized package. We can thank both Intel and Nvidia for dropping the energy requirements – and resulting thermal output – of its products for this revolution in PC shrinkage. And yet, we still end up paying quite a lot more for a system that under performs similarly priced, yet larger, PC gaming towers.

The Asus ROG GR8 II is the perfect example of this quandary.

With an interior capacity of just four litres, this PC is smaller than a Playstation 4. You might think that makes it the perfect PC to stash in your AV unit, but there’s a slight hitch. It can only be operated in an upright position. The entire cooling solution has been designed for the unit to be operated vertically, drawing in fresh cool air from the bottom, and expelling the hot air from the rear and top. Lay it down horizontally and that design goes out the window, yet even when vertical it’s a little loud, measuring 51dB during our sound test. It’s a shame, as the design is rather eye-catching, and would look lovely next to your amplifier.

Given the small size, we can’t expect a huge amount of I/O options. Adorning the front are twin USB 3.0 ports, along with the usual mic-in/headphone out jacks. Looking to the rear reveals twin USB 2.0, one USB 3.1 Type A and one USB 3.1 Type C; sadly the latter does not appear to support Thunderbolt as there’s no mention of it in the specs, where it would usually be called out in bright, bold letters. Video is handled courtesy of the custom Asus graphics card within, with twin HDMI 2.0b and a single DP1.4. Audio can be delivered via the rear over S/PDIF optical, or a single 3.5mm audio jack. Finally there’s a single Gigabit Ethernet connector, and Kensington lock, though why you’d need the lock in the environment this thing is going to live in seems a bit redundant.

As well as the standard Ethernet connector, full 802.11ac Wi-Fi is integrated, and it’s nice to see that it supports Ml MO. However, it’s a rather basic 2×2 antennae setup, so don’t expect to make the most of your AC5300 router. However, this can be combined with the unit’s Ethernet via Asus’ interesting GameFirst IV technology. This teams all of your network connections to deliver maximum throughput, so you can combine both the wired and wireless connections.

Looking inside the case reveals a box that doesn’t offer a lot of room for upgrades thanks to its crowded capacity. In fact, Asus has had to build a custom version of the graphics card to fit, which is based on Nvidia’s GeForce GTX1060 GPU. This has been paired with Intel’s high-end i7-7700 CPU, which seems a bit of an odd mix. This is basically one of Intel’s flagship CPUs, hitting a Boost speed of 4.2GHz across all four HyperThreaded cores. It’s a problem we’ve seen in other systems recently -combining a top-end CPU with a mid or lower end GPU. We’d have much preferred to see a slightly slower CPU such as the 7500 paired up with the much more powerful GeForce GTX 1070. Sure, the price would jump by a couple of hundred dollars, but the performance would be significantly improved. 16GB of RAM is fine, but the long-term storage is a bit on the scarce side, with just a single 256GB Samsung M.2 drive. A spare 2.5-inch drive bay will accommodate a larger SSD or HDD, but you’re going to need to fork out for that yourself.

Given the price, it’d be easy to build a faster system in a full-sized case for the same price, but that’s not really applicable for those who don’t want to get their hands dirty. Still, we wish Asus had gone for a slightly more sensible CPU/GPU balancing act. 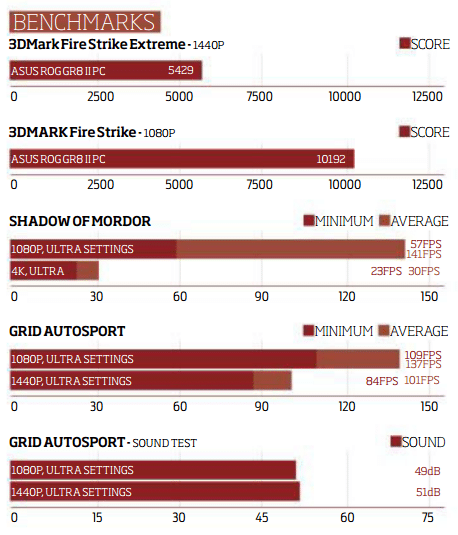