The Asus N551JX’s powerful internals place it at the non-portable end of the spectrum. It’s 32mm thick and weighs a wince-inducing 2.7kg, even without its large power adapter. You won’t tip over backwards if you sling it into a backpack, but it will definitely alter your center of gravity.

Despite its chunky characteristics, it’s an attractive laptop with curved, swooping edges, a metal lid and a metallic keyboard tray with decorative circular patterns. You also get a dinky subwoofer to plug into the dedicated audio jack, which augments the otherwise unremarkable built-in speakers. The backlit keyboard is satisfyingly chunky and offers plenty of tactile feedback, and includes a full number pad and set of function keys. The power button is integrated into the main keyboard, but it’s harder to press than the character keys, so you’re unlikely to hit it by accident, unless you’re typing in a furious rage. The fourth-generation dual-core Intel Core i5-4200H is a step up from devices with a U (“ultra low-power”) suffix, with the H su‘ x denoting a chip with higher-end graphics and a much higher TDP. Indeed, the chip in use here has a huge TDP of 47W and a base clock speed of 2.8GHz, which can Turbo Boost to 3.4GHz, easily beating laptops with Core i5-5200U chips. With an overall score of 49 in our benchmarks, including an impressive score of 85 in the single core image-editing test, it thrashed the competition and underlined its credentials as a power user’s plaything. Gamers can get in on the action, too. The Nvidia GeForce GTX 950M is a mid-range mobile chip that’s capable of playing the latest games at Full HD resolution, although you’ll have to drop the graphical eye candy to achieve playable frame rates. Still it managed an average frame rate of 105fps in the Bioshock Infinite benchmark at Medium settings in Full HD. 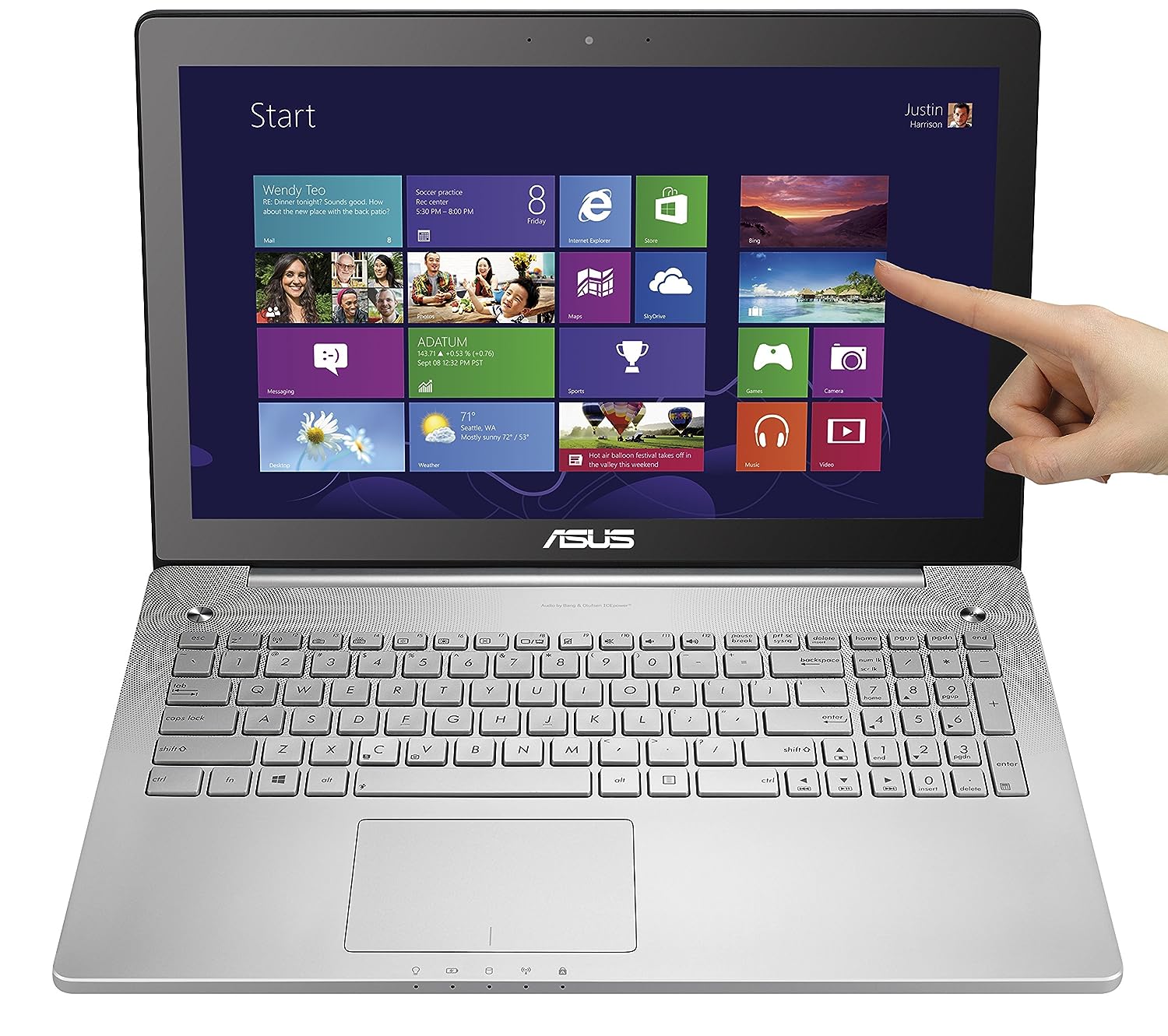 Not only is the processing and graphics kit formidable, you also get 8GB of RAM and a 128GB Kingston SSD, which leaves Windows 10 (upgraded from Windows 8.1) feeling snappy when you’re hunting down files using Cortana. There’s also a 1TB mechanical hard disk on board for bulk file storage, giving this laptop the best of both worlds in performance and capacity.

Despite the high-end components, the chunky six-cell, 56Wh battery powered the laptop through 4hrs 54mins of our looping video playback test. When you’re getting so much, you begin to wonder where Asus has cut costs. Sadly, the compromise is saved for the screen. The Full HD resolution is fine, but viewing angles are particularly poor and color accuracy is among the worst of any laptop on test. The Asus N551JX is a fantastically powerful laptop with very few compromises, but if there’s one compromise we never want to see on a laptop, it’s the screen. What’s even more galling is the fact that the displays were a strength of Asus’s previous generation N551 Series. Consequently, if you’re looking for a laptop that’s going to spend most of its time hooked to an external display, it’s the pick of the crop. Otherwise, it falls tantalizingly short of greatness.