The Monitor Your Eyes Want Is The Monitor They Deserve. Read our ASUS MG279Q Review.

Ever been at a friend’s house or a LAN party and glimpsed a computer monitor so beautiful that you felt pangs of jealousy wash over you, to the point where you actually checked your arm to make sure you weren’t turning green? A bright, crisp monitor with excellent color reproduction is something that you can easily take for granted until you come face to face with one. But once you’ve basked in the glory of a really, really good monitor, you may as well know that it will haunt your dreams until you give in and bring one home. (This is sometimes referred to as the “The grass is always greener, until it isn’t” postulate, and it is totally not made-up science.) 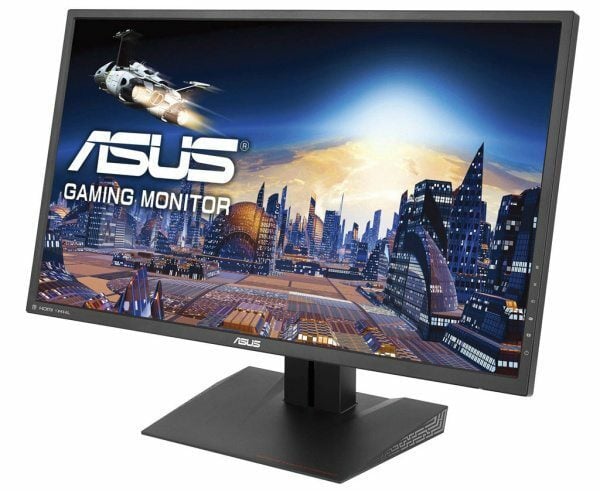 Once you decide it’s time to get yourself a good monitor, there are lots of options to peruse and lots of data to sift through in order to make the right decision, but we suggest that you save yourself the hassle and end your search here and now. The ASUS MG279Q is a gorgeous 27-inch, WQHD 2,560 x 1,440 monitor that is designed specifically for gaming, and it has the design and the technology to provide the experience you are after.“The MG279Q combines the best gaming features of both TN and IPS panel technology and then some,” says ASUS Product Marketing Specialist David Chiang. “You’re looking at a monitor that combines the vibrant colors and image fidelity that gamers want for immersive environments and the ultrahigh refresh rate needed for nearly uninterruptible visuals.”IPS panel technology. IPS stands for in-plane switching, and it’s a technology that was designed to solve problems with older TN (twisted nematic field effect) displays that had great, fast refresh rates but suffered from poor color reproduction and very narrow viewing angles. (Users essentially had to look at them from directly in front or picture quality degraded badly.)“For gamers who enjoy immersive games like The Witcher 3 or have dozens of graphical enhancement mods in Skyrim, IPS delivers the best possible visual experience,” Chiang says. “The tradeoff is that IPS panels were historically limited to a 60Hz refresh rate.”We’ve talked about the importance of higher refresh rates on many occasions in CPU, but Chiang offers a brief refresher: “In short, frequency dictates maximum frame rate,” he says. “High frame rates are sought after by competitive gamers especially in FPSes and MOBAs simply because at 144Hz, the translation of control to screen is extremely fluid, allowing for increased accuracy and precision.

The ASUS MG279Q isn’t the cheapest 27-inch monitor you’ll find on the shelf at your local parts store or your favorite online retailer. But did you buy the cheapest graphics card you could possibly find? The cheapest power supply?

First and foremost, the MG279Q is a great monitor from a visual standpoint, but when you add up its cutting-edge features, FreeSync support, flexible setup options, and its three year warranty, ASUS is betting that you’ll find you can’t afford to settle for anything less.