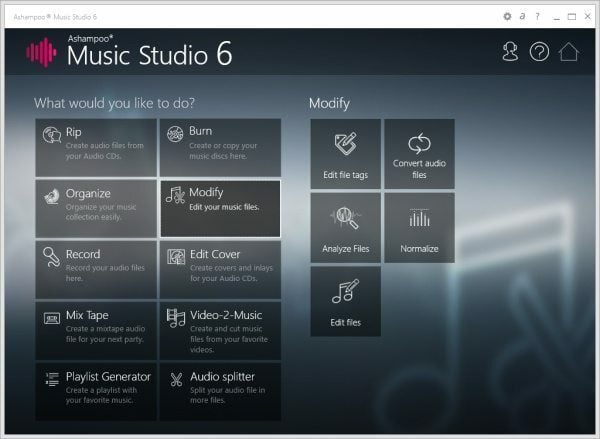 Ashampoo presents an upgrade to its Music Studio suite

This is an update to the Ashampoo’s Music Studio program that I reviewed last year. For those that are not familiar with the product, it’s essentially a collection of associated utilities collated into a main menu. They cover all the essentials from extracting or recording your audio files, through modifying and organising them, to finally burning the results to CD or hard drive. It also includes a basic method of labelling them as well.

With this release it’s increased the main menu from eight to ten options, adding a playlist generator and an audio splitter. The playlist generator is quite a useful utility that’s more comprehensive than the one built into Windows Media Player. It has a simple point-and-click interface that makes it easy to pick tracks from different folders. It will also collate the chosen tracks, picking up the artist and song titles from the source files (of course, assuming this data was saved in the first place). Alternatively, it will search the Free-DB database online, to see if a match can be found. Once the list is complete, you can save it in a range of different formats, which are generally compatible with most of the popular audio players. This version also supports the Apple formats AAC and m4a. So you can burn your music to disc or convert iTunes songs into MP3 and WMA format, to listen on your home stereo or other devices without iTunes.I wasn’t really convinced that the audio splitter was a particularly useful feature, but of course if you have a live concert recording, it would allow you to split away individual tracks or perhaps remove some of those you’re not particularly keen on. It could also be used to create ringtones from any of your MP3 recordings, which for some phones have to be kept under a certain length. Another useful feature of the splitter is removing those annoying two-second gaps you sometimes get in live recording.Obviously one of the main features of the Music Studio is audio ripping, where it can extract the audio tracks from CDs, video files, audio tapes and vinyl discs, automatically creating playlists in the process. This it does very well. You can chose from a number of output formats, setting the sample and bit rate and whether you want a mono or stereo recording.After ripping. Music Studio offers a number of more advanced editing options, where you can globally change the volume levels to maintain a constant or normalised level. This is particularly useful if you’re compiling a selection of tracks for an event, which could potentially have different volume settings. You can also optimise the ripping to accommodate audio tapes and vinyl discs (what we in the UK refer to as records).Other advanced features include multi-track overlay and editing, which includes the facility to record a microphone input over your music. You can also edit the raw data as a waveform, changing the volume, or fade the start and end. There’s also a graphic equaliser where you can completely change the tonal value of individual tracks.I mentioned in my last review that the editor for creating and printing your CD covers and labels was somewhat lacking in features. Well, there’s been some improvement, because it now lists many more compatible printers, my own Canon MG5450 being one of them. Quite an important point really, because my printer will print directly onto CD or DVDs. Sadly it doesn’t retain the printer information, so you have to select it every time. Also, the editing functions are still somewhat primitive compared to similar products. While you can import your own background graphics, there’s no facility to search for online graphic content, but at least this version will now import artist and track data from the CD itself.If Ashampoo can fix these problems, then it’s surely on to a winner here. Joe LaveryRemains good value, but with a little work could be even better.